Every so seldom, I need a good laugh. So I read an article by one of the right-wing, high-paid apologists for the upper 1% income group. Take Charles Krauthammer (please). Although what Krauthammer preaches is . . . no other word for it . . . stupid, he himself is not stupid.

No, he’s a smart, bought-and-paid-for prostitute, who apparently has become so rich and so successful duping the innocent, he is sydicated in hundreds of newspapers (most owned by the 1%), and is a panelist on (of course) Fox news (owned by Rupert Murdoch and his family).

Am I too harsh? Should I temper my remarks with civility? You be the judge: 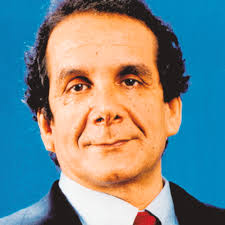 Krauthammer sneering at you

Vice-presidential picks are always judged by their effect on the coming election. They rarely have any. They haven’t had a decisive influence since Lyndon Johnson carried Texas for John Kennedy in 1960. (That and Illinois put Kennedy over the top.)

Translation: “This is a subtle reminder to you liberals that your hero, Kennedy, stole his election. It’s irrelevant to this article, but I never miss a chance to ‘dis’ the liberals.”

This time, however, the effect could be significant. The Democrats’ ‘Mediscare’ barrage is already in full swing. Paul Ryan, it seems, is determined to dispossess Grandmother, then toss her over a cliff.

Translation: “A ‘Mediscare barrage’ is when you people learn the Ryan plan screws, not Grandmother, but Grandmother’s kids and grandkids. We hope you’re as callous as we are, so will be pleased, when we assure you our dreadful plan doesn’t apply to you, but only to your children.”

Republicans have a twofold answer. First, hammer home that their Medicare plan affects no one over 55, let alone 65. Second, go on offense. Point out that President Obama cuts Medicare by $700 billion to finance Obamacare.

Translation: “The Ryan plan is so wonderful, we want to assure those of you over 55 it will not affect you. No, it only screws those under 55. Feel better?

“And as for that mythical $700 billion, we keep talking about, O.K. Ryan has proposed exactly the same “cuts” in his own budget proposal. (From the Washington Post: “Paul Ryan says he never would have included a $700 billion Medicare cut in his budget if President Barack Obama hadn’t done it first. ‘He put those cuts there,’ Ryan said. ‘We would never have done it in the first place.’”)

Too sad for words

“And O.K., the money doesn’t come out of Medicare benefits, but rather payments to hospitals, which hospitals requested in exchange for the reduced emergency room costs Obamacare provides. But don’t let facts get in the way of my good story.”

For a country with stagnant growth, ruinous debt and structural problems crying out for major entitlement and tax reform? Obama’s “plan” would cut the deficit from $1.20 trillion to $1.12 trillion. It’s a joke.

Translation: “The Romney/Ryan plan would cut the deficit more, by increasing your taxes and reducing your federal benefits, thereby assuring a recession if we are lucky and a depression if we are not. The debt is “ruinous” only if you don’t understand Monetary Sovereignty, which I’m sure you don’t.”

Ryan represents a new constitutional conservatism of limited government and individual opportunity that carried Republicans to victory in 2010, not just as a rejection of Obama’s big-government hyper-liberalism but also as a significant departure from the philosophically undisciplined, idiosyncratically free-spending “compassionate conservatism” of Obama’s Republican predecessor.

“And as for ‘compassionate conservatism,’ compassion is for sissies, not for real Americans.”

Ryan’s role is to make the case for a serious approach to structural problems — a hardheaded, sober-hearted conservatism that puts to shame a reactionary liberalism that, with Greece in our future, offers handouts, bromides and a 4.6 percent increase in tax rates.

Translation: “Yes, I know. The U.S. cannot become like Greece, with the former being Monetarily Sovereign and the later being monetarily non-sovereign, but since you are ignorant of economics, I can use the “Greece” word to scare you, and you will believe me.

If Ryan does it well, win or lose in 2012, he becomes a dominant national force. Mild and moderate Mitt Romney will have shaped the conservative future for years to come.

Translation: “‘Mild and moderate’ means: ‘I take all positions on all arguments. I agree with you no matter what you think. I even once loved Ryan’s budget, but now I’m not sure whether I do or I don’t, but then again, I’m not sure I don’t or I do – but don’t hold me to that. All I ask is for you to accept my budget, though it doesn’t exist. And please vote for me, whoever I am today or tomorrow.”

The old “compassionate conservatism” wanted to improve the welfare of all Americans. The new conservatism makes no such pretense. Rather than “me-first,” it is “me-only,” a conservatism that sneers at the needy for being needy.

It is a rich, white man’s selfish philosophy, and unless you are all four – rich, white, male and selfish — you only will hurt yourself to follow it.

But if you do believe what Krauthammer says, he will sneer at you, ignorant peasant.

3 thoughts on “–Krauthammer sneers at you ignorant peasants”