This is what has been happening:

President Trump sparked uproar on Twitter Friday with a series of tweets encouraging followers to “liberate” amid a growing movement of protests across the country to demand governors reopen “non-essential businesses” and send people back to work.

The three states Trump tweeted about — Virginia, Michigan and Minnesota — are run by Democratic governors and critics have responded by calling to “liberate America” from the president.

The protests — mainly led by conservative supporters of Trump – are a controversial part of a growing effort to turn around an economy that has been hurt in recent weeks because of the pandemic.

Trump has announced that the buck will stop with — the governors, not with him.

Either way, Trump’s followers will parrot Trump’s words, screaming like zombies, and Mitch McConnell and Mike Pence will agree, so long as someone tells them what to agree with. 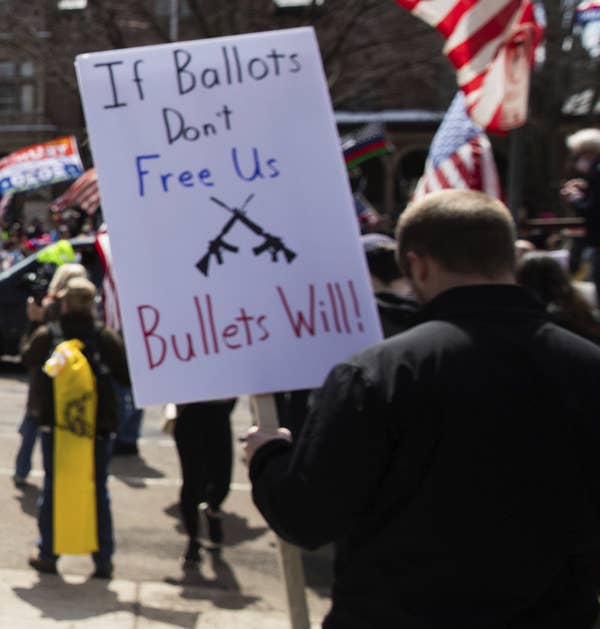 Here is one of the 40 signs instigated by Donald Trump’s anti-science, insanity-inducing tweets.

It has become crazy, when the President and a political party want people to ignore science, their elected leaders, and the safety of their family, friends, and fellow Americans.

Yes, the right-wing gun-nuts are out there, threatening people. What did you expect?

In Trump’s ‘LIBERATE’ tweets, extremists see a call to arms
Trump’s tweets pushed many online extremist communities to speculate whether the president was advocating for armed conflict, an event they’ve termed “the boogaloo.”
By Ben Collins and Brandy Zadrozny

When President Donald Trump tweeted “LIBERATE MINNESOTA!” on Friday morning, some of his most fervent supporters in far-right communities — including those who have agitated for violent insurrection — heard a call to arms.

Trump’s tweets came after small protests by Trump supporters broke out in a handful of states, many of which were fueled by anti-vaccination and anti-government groups.

Anti-government sentiment has percolated among far-right extremists in recent weeks over the stay-at-home orders governors have issued to prevent the spread of the coronavirus.

Trump’s tweets, however, pushed many online extremist communities to speculate whether the president was advocating for armed conflict, an event they’ve termed “the boogaloo,” for which many far-right activists have been gearing up and advocating since last year.

These are people who demand “freedom.” For them, freedom means, “I will do whatever I please, whenever I please, no matter whom I hurt, and if you try to stop me, I will shoot you.”

And then they wave an American flag to demonstrate how patriotic they are.

Did you ever think you’d see the day in America when the President of the United States and his political party would advocate armed conflict against the government?

It’s happening, right now. That is how incredibly stupid America has become under Trump’s guise of “Making America Great, Again.”

Rebellion: This is how dictatorships are born, and if you folks out there fear socialism or liberalism, wait until you get a taste of fascism.

This is what Trump has wrought:

What is the ‘boogaloo’?
How online calls for a violent uprising are hitting the mainstream

An anti-government movement that advocates for a violent uprising targeting liberal political opponents and law enforcementhas moved from the fringes of the internet into the mainstream and surged on social media in recent months, according to a group of researchers that tracks hate groups.

The movement is organized around the term “boogaloo,” includes groups on mainstream internet platforms such as Facebook, Instagram, Twitter and Reddit, as well as fringe websites including 4chan, according to a report released Tuesday night by the Network Contagion Research Institute (NCRI), an independent nonprofit of scientists and engineers that tracks and reports on misinformation and hate speech across social media.

America has fallen under a Mussolini-style government, with a dictator fomenting violence by mindless crowds who scream mindless slogans.

[After removing all political opposition through his secret police and outlawing labor strikes, Mussolini and his followers consolidated their power through a series of laws that transformed the nation into a one-party, fascist dictatorship.

Within five years, Mussolini had established dictatorial authority by both legal and extraordinary means.]

Do you hear the mob, the echos of “Il Duce, Il Duce,” “MAGA, MAGA” reverberating through our streets?

6 thoughts on “When the President and one major, political party encourage people to riot, the America we love is lost.”