An article titled, “The Fed’s Financial Accounts: What Is Uncle Sam’s Largest Asset?” by Doug Short, 12/9/16, includes the following graph. 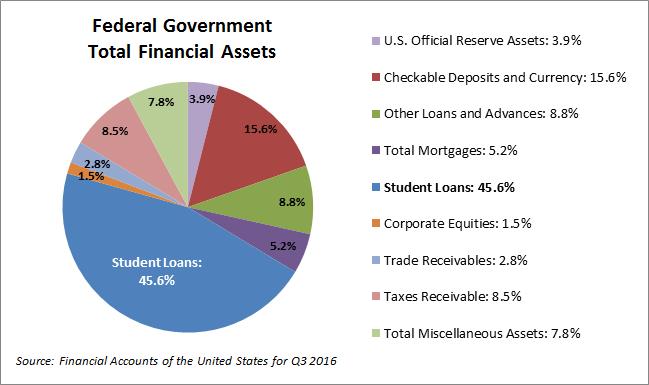 Here we see the massive increase in student indebtedness to the federal government, especially in just the past six years.

Quoting from the 2013 post titled, “Five reasons why we should eliminate school loans”:

Senator Elizabeth Warren and the New York Times have talked about student loans. The Times said:

Rather than stimulating America’s economic growth, college educations funded by loans actually “act as a drag on growth.”

The federal government not only lends money to students — money it should give without asking for its return — but it charges students interest. And these are not low rates.

Impoverishing loans must be paid back with high interest rates.

If you wanted a plan to discourage college while also discouraging economic growth, this is it.

The federal government making a profit on students is ridiculous.

Being Monetarily Sovereign, the government neither needs nor uses profits. All dollars sent to the federal government disappear from the money supply. In other words, they are destroyed upon receipt. Federal profits are a net loss to the economy.

Senator Warren complains about interest rates when she should complain about the loans themselves.

The big debate in Congress is how much interest to charge students. And there are several complex, convoluted plans afoot. But, the federal government never can run short of dollars. It never needs to ask anyone for dollars — not you, not me, not China, not our students.

So college attendance — which benefits all of America — has become a widespread hardship.

We already have a model plan.  It’s called “Medicare.” Although there are differences between healthcare and education, we can learn from the parallels.

There are more than five thousand public and private hospitals in the United States. Each is unique in terms of geography, reputation, specialties, size, tuition, staff, etc.

Coincidentally, there are almost five thousand public and private colleges in the United states. Each is unique in terms of geography, reputation, specialties, size, costs, staff, etc.

We could call the program “College-aid” or something similar.

Tuition, books & materials, tutoring, housing, and a meal stipend all would be covered according to limits set by “College-aid” — similar to the way Medicare pays.

As with college education, and healthcare, the richer receive the best and the poorer receive the worst. But the biggest difference, regarding K-12, is not just the money spent on schools, but also the school and family environments.

New Trier High School  straddles two upscale suburbs of Chicago. The following is from their website:

“For the Class of 2014, New Trier’s mean composite score on the ACT was 27.4, the highest in Illinois for an open enrollment public school. Approximately 98 percent of the Class of 2014 enrolled in college.”

“New Trier offers numerous opportunities for learning and involvement outside of the classroom in activities, athletics, fine/performing arts, and social service.

“New Trier also offers more than 150 student clubs, many with a service component. A comprehensive Student Services program serves students’ social and emotional growth in a variety of ways, from social work and special education services to student support groups and tutoring.

“Service Learning is also an important part of the New Trier experience, and students are asked to participate in service projects throughout their four years at the school.

Dumbar High School is located in Chicago. Its student population is 99% “low income.” It has a very modest website, but from what we can glean on the Internet, Dunbar’s mean composite score on the ACT was 14.4

The figures may not be directly comparable, because Dunbar doesn’t break out Operational spending from Educational spending, but two facts are clear: New Trier spends more and has better results; Dunbar spends less and has worse results.

And this is where the arguments begin. Is there a cause/effect relationship between school spending and results? There is plenty of research on both sides, but two things are clear:

While “throwing money at the problem,” won’t always produce better results — there are too many other variables in play — “starving the beast” is almost guaranteed to produce worse results.

So, where there may be doubt about how much per-pupil spending is best, one may wish to err on the higher side especially if money is free.

And, that is the point.

Grades K-12 are funded by the public, either through state and local taxes or through direct tuitions. And unlike the federal government, the public has limited funds.

State and local taxpayers pay for one of the largest expenses each state has: K-12 education.

As a result of taxpayer resistance, many K-12 schools, especially schools in low-income areas, are insufficiently funded, some lacking even the most basic educational assets.

Because the U.S. federal government is Monetarily Sovereign, it neither has, nor can have, a financial “burden.” It creates dollars, ad hoc, by paying bills.

Economic growth should include the “bottom” 99.9%, not just the .1%, the only question being, how best to accomplish that. Modern Monetary Theory (MMT) favors giving everyone a job. Monetary Sovereignty (MS) favors giving everyone money. The five articles describe the pros and cons of each approach.
4. FREE EDUCATION (INCLUDING POST-GRAD) FOR EVERYONE (See also: Five reasons why we should eliminate school loans)
Monetarily non-sovereign State and local governments, despite their limited finances, support grades K-12. That level of education may have been sufficient for a largely agrarian economy, but not for our currently more technical economy that demands greater numbers of highly educated workers.
Because state and local funding is so limited, grades K-12 receive short shrift, especially those schools whose populations come from the lowest economic groups. And college is too costly for most families.
An educated populace benefits a nation, and benefitting the nation is the purpose of the federal government, which has the unlimited ability to pay for K-16 and beyond.
5. SALARY FOR ATTENDING SCHOOL
Even were schooling to be completely free, many young people cannot attend, because they and their families cannot afford to support non-workers. In a foundering boat, everyone needs to bail, and no one can take time off for study.
If a young person’s “job” is to learn and be productive, he/she should be paid to do that job, especially since that job is one of America’s most important.
6. ELIMINATE CORPORATE TAXES
Corporations themselves exist only as legalities. They don’t pay taxes or pay for anything else. They are dollar-transferring machines. They transfer dollars from customers to employees, suppliers, shareholders and the government (the later having no use for those dollars).
Any tax on corporations reduces the amount going to employees, suppliers and shareholders, which diminishes the economy. Ultimately, all corporate taxes come around and reappear as deductions from your personal income.
7. INCREASE THE STANDARD INCOME TAX DEDUCTION, ANNUALLY. (Refer to this.) Federal taxes punish taxpayers and harm the economy. The federal government has no need for those punishing and harmful tax dollars. There are several ways to reduce taxes, and we should evaluate and choose the most progressive approaches.
Cutting FICA and corporate taxes would be a good early step, as both dramatically affect the 99%. Annual increases in the standard income tax deduction, and a reverse income tax also would provide benefits from the bottom up. Both would narrow the Gap.
8. TAX THE VERY RICH (THE “.1%) MORE, WITH HIGHER PROGRESSIVE TAX RATES ON ALL FORMS OF INCOME. (TROPHIC CASCADE)
There was a time when I argued against increasing anyone’s federal taxes. After all, the federal government has no need for tax dollars, and all taxes reduce Gross Domestic Product, thereby negatively affecting the entire economy, including the 99.9%.
But I have come to realize that narrowing the Gap requires trimming the top. It simply would not be possible to provide the 99.9% with enough benefits to narrow the Gap in any meaningful way. Bill Gates reportedly owns $70 billion. To get to that level, he must have been earning $10 billion a year. Pick any acceptable Gap (1000 to 1?), and the lowest paid American would have to receive $10 million a year. Unreasonable.
9. FEDERAL OWNERSHIP OF ALL BANKS (Click The end of private banking and How should America decide “who-gets-money”?)
Banks have created all the dollars that exist. Even dollars created at the direction of the federal government, actually come into being when banks increase the numbers in checking accounts. This gives the banks enormous financial power, and as we all know, power corrupts — especially when multiplied by a profit motive.
Although the federal government also is powerful and corrupted, it does not suffer from a profit motive, the world’s most corrupting influence.
10. INCREASE FEDERAL SPENDING ON THE MYRIAD INITIATIVES THAT BENEFIT AMERICA’S 99.9% (Federal agencies)Browse the agencies. See how many agencies benefit the lower- and middle-income/wealth/ power groups, by adding dollars to the economy and/or by actions more beneficial to the 99.9% than to the .1%.
Save this reference as your primer to current economics. Sadly, much of the material is not being taught in American schools, which is all the more reason for you to use it.

7 thoughts on “Ten Steps to Prosperity: Step 4: Free education for everyone”