When a black person commits a crime against a white person, you can depend on leading conservative voices to crawl out from under their rocks to change the situation from an individual criminal issue into an overall bigotry excuse — a good reason to “crack down” on every black.

Bigots with urging by the likes of the Ku Klux Klan, racist governors,  brutal sheriffs, national politicians and conservative media pundits like Fox and Breitbart, never let an opportunity for hatred go by without a call for violence.

And so it continues:

A depraved attack on a mentally disabled white teen broadcast live on Facebook allegedly by four black Chicago-area residents became a national rallying cry Thursday for conservative pundits who tried to pin the blame for the attack — without evidence — on the Black Lives Matter movement.

Shown repeatedly on cable TV and shared tens of thousands of times online, the grotesque video of the 18-year-old being cut with a knife in the scalp and forced to drink toilet water led familiar right-wing talking heads including Glenn Beck, Milwaukee County Sheriff David Clarke and others to call for increased charges and to find fault with what they characterized as excessively permissive policing. 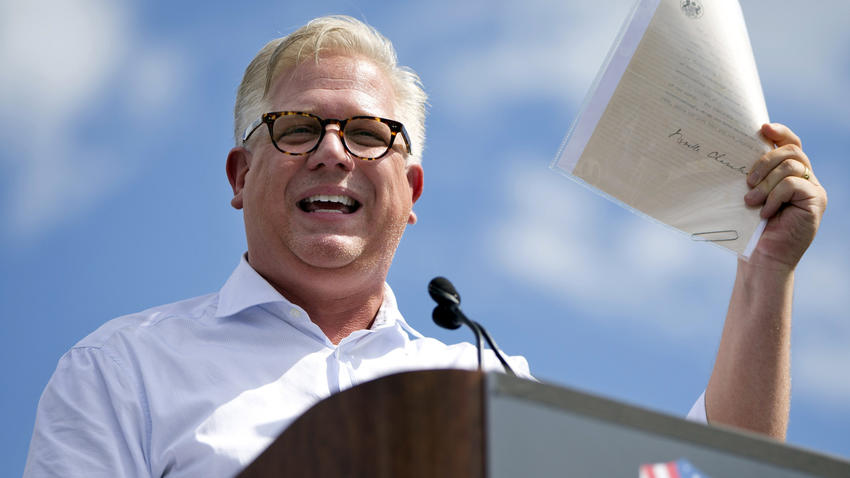 Note the joy on reliable Glenn (“Jewfish get stinky”) Beck’s face, as he relishes yet another opportunity to promulgate his conservative bigotry.

What are Beck’s examples of “excessively permissive policing? ” He has none. Perhaps he would prefer lynch mobs?

Beck urged his 1.1 million Twitter followers to “Stand up with me and demand justice in Chicago for the beating of a disabled trump supporter by BLM,” also accusing the media of “blindly encouraging” similar crimes.

What normal human being would link Black Lives Matter and the ACLU to the actions of four black kids? Only a perverted, hate-mongering personality like Beck and his ilk.

And now comes the ever-reliable Newt Gingrich, to add more fuel to the racist fire:

Former House Speaker Newt Gingrich told Fox News, “If this had been done to an African-American by four whites, every liberal in the country would be outraged, and there’d be no question but that it’s a hate crime.”

What makes Newt believe that liberals are not outraged by such a crime? Nothing. But he says it to rile up the mentally unstable, hungering for an excuse lash out.

And after Chicago police, who are under a federal investigation of their policies and practices following their shooting of black teen Laquan McDonald, later Thursday charged four defendants with a hate crime, conservative author Mike Cernovich took a victory lap. He told his 185,000 followers that their activism had led to the charges.

“Sorry you are a loser with no impact,” Cernovich tweeted at an opponent who dared suggest that the case would have been charged as a hate crime without the conservative outcry.

Hmmm . . . A tweet calling someone a “loser.”  Now where have we seen that before?

See conservatives, it’s like this.  It is well known that American police hate whites, so even an atrocious crime like this would not have been prosecuted unless the conservative community voiced disapproval.

You believe that, right?

Police spokesman, Anthony Guglielmi, said investigators believe the man was targeted because he had special needs, not because he was white.

Do white on black crimes elicit a “punish all whites” response?  (Hint: That was a rhetorical question.)

Anyway, conservatism is a political movement that has to do with preserving (“conserving”) traditions — in the present instance, American traditions. This would include freedom of religion, political freedom, financial prudence, strict obedience to laws, a strong military and foreign policy, and democracy.

So, exactly when did conservatism become America’s synonym for hatred and bigotry?

Ten Steps To Prosperity:
1. ELIMINATE FICA (Ten Reasons to Eliminate FICA )
Although the article lists 10 reasons to eliminate FICA, there are two fundamental reasons:
*FICA is the most regressive tax in American history, widening the Gap by punishing the low and middle-income groups, while leaving the rich untouched, and
*The federal government, being Monetarily Sovereign, neither needs nor uses FICA to support Social Security and Medicare.
2. FEDERALLY FUNDED MEDICARE — PARTS A, B & D, PLUS LONG TERM CARE — FOR EVERYONE (H.R. 676, Medicare for All )
This article addresses the questions:
*Does the economy benefit when the rich can afford better health care than can the rest of Americans?
*Aside from improved health care, what are the other economic effects of “Medicare for everyone?”
*How much would it cost taxpayers?
*Who opposes it?”
3. PROVIDE AN ANNUAL ECONOMIC BONUS TO EVERY MAN, WOMAN AND CHILD IN AMERICA, AND/OR EVERY STATE, A PER CAPITA ECONOMIC BONUS (The JG (Jobs Guarantee) vs the GI (Guaranteed Income) vs the EB) Or institute a reverse income tax.
This article is the fifth in a series about direct financial assistance to Americans:

Economic growth should include the “bottom” 99.9%, not just the .1%, the only question being, how best to accomplish that. Modern Monetary Theory (MMT) favors giving everyone a job. Monetary Sovereignty (MS) favors giving everyone money. The five articles describe the pros and cons of each approach.
4. FREE EDUCATION (INCLUDING POST-GRAD) FOR EVERYONEFive reasons why we should eliminate school loans
Monetarily non-sovereign State and local governments, despite their limited finances, support grades K-12. That level of education may have been sufficient for a largely agrarian economy, but not for our currently more technical economy that demands greater numbers of highly educated workers.
Because state and local funding is so limited, grades K-12 receive short shrift, especially those schools whose populations come from the lowest economic groups. And college is too costly for most families.
An educated populace benefits a nation, and benefitting the nation is the purpose of the federal government, which has the unlimited ability to pay for K-16 and beyond.
5. SALARY FOR ATTENDING SCHOOL
Even were schooling to be completely free, many young people cannot attend, because they and their families cannot afford to support non-workers. In a foundering boat, everyone needs to bail, and no one can take time off for study.
If a young person’s “job” is to learn and be productive, he/she should be paid to do that job, especially since that job is one of America’s most important.
6. ELIMINATE CORPORATE TAXES
Corporations themselves exist only as legalities. They don’t pay taxes or pay for anything else. They are dollar-transferring machines. They transfer dollars from customers to employees, suppliers, shareholders and the government (the later having no use for those dollars).
Any tax on corporations reduces the amount going to employees, suppliers and shareholders, which diminishes the economy. Ultimately, all corporate taxes come around and reappear as deductions from your personal income.
7. INCREASE THE STANDARD INCOME TAX DEDUCTION, ANNUALLY. (Refer to this.) Federal taxes punish taxpayers and harm the economy. The federal government has no need for those punishing and harmful tax dollars. There are several ways to reduce taxes, and we should evaluate and choose the most progressive approaches.
Cutting FICA and corporate taxes would be a good early step, as both dramatically affect the 99%. Annual increases in the standard income tax deduction, and a reverse income tax also would provide benefits from the bottom up. Both would narrow the Gap.
8. TAX THE VERY RICH (THE “.1%) MORE, WITH HIGHER PROGRESSIVE TAX RATES ON ALL FORMS OF INCOME. (TROPHIC CASCADE)
There was a time when I argued against increasing anyone’s federal taxes. After all, the federal government has no need for tax dollars, and all taxes reduce Gross Domestic Product, thereby negatively affecting the entire economy, including the 99.9%.
But I have come to realize that narrowing the Gap requires trimming the top. It simply would not be possible to provide the 99.9% with enough benefits to narrow the Gap in any meaningful way. Bill Gates reportedly owns $70 billion. To get to that level, he must have been earning $10 billion a year. Pick any acceptable Gap (1000 to 1?), and the lowest paid American would have to receive $10 million a year. Unreasonable.
9. FEDERAL OWNERSHIP OF ALL BANKS (Click The end of private banking and How should America decide “who-gets-money”?)
Banks have created all the dollars that exist. Even dollars created at the direction of the federal government, actually come into being when banks increase the numbers in checking accounts. This gives the banks enormous financial power, and as we all know, power corrupts — especially when multiplied by a profit motive.
Although the federal government also is powerful and corrupted, it does not suffer from a profit motive, the world’s most corrupting influence.
10. INCREASE FEDERAL SPENDING ON THE MYRIAD INITIATIVES THAT BENEFIT AMERICA’S 99.9% (Federal agencies)Browse the agencies. See how many agencies benefit the lower- and middle-income/wealth/ power groups, by adding dollars to the economy and/or by actions more beneficial to the 99.9% than to the .1%.
Save this reference as your primer to current economics. Sadly, much of the material is not being taught in American schools, which is all the more reason for you to use it.

7 thoughts on “At what point did conservatism morph into bigotry?”