The Trump/GOP solution all problems: Beat down the poor victims into submission.

The COVID-19 still raging, and unemployment still is at monstrous levels. The Trump/GOP, federal government has the power to solve the financial problems, but prefers to punish the victims.

A closely watched gauge of layoffs across the U.S. held steady at a historically high level last week, pushing the total during the coronavirus-induced economic crisis to a mind-boggling 51.3 million.

That could reflect the spike in coronavirus cases across much of the country, particularly the South and West, and decisions by more than 20 states to pause or reverse the reopening of restaurants, bars, gyms, movie theaters and other outlets.

The rollbacks may spark a new wave of layoffs, especially in hard-hit states like Texas, Florida, Arizona and California, and possibly even push the claims totals higher.

Another factor that may be triggering layoffs is that many businesses are exhausting the forgivable federal loans they received as long as they retained or rehired staffers, says Rubeela Farooqi, chief U.S. economist of High Frequency Economics.

Some that are struggling could let workers go.

“Conditions in the labor market remain weak and the risk of mounting permanent job losses is high, especially if activity continues to be disrupted by repeated virus-related shutdowns,” Farooqi wrote in a note to clients.

Unemployment is incredibly high because businesses are laying off people. The number of available jobs has decreased to depression-era levels.

If jobs are in short supply, because companies and individuals are running short of money, what is the political solution? 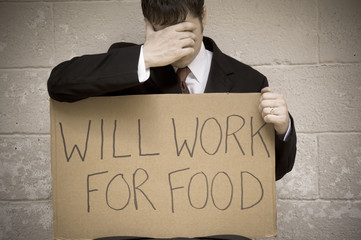 Not what the Trump/GOP is doing.

(Unemployment) could be staying high in part because the federal government has been providing a $600 weekly supplement to state benefits, prompting some Americans to stay on unemployment rather than take a new job.

But that bonus is set to expire at the end of the month unless Congress renews it, possibly at a reduced level.

Businesses have disappeared and continue to disappear; jobs are disappearing and may be lost forever; and the geniuses in right-wing Washington think people are out of work because they receive $600 per month??

And the “solution” is to take away that $600 to encourage people to go back to work at non-existent jobs?

In the right-wing mind, the solution to all problems is to punish the victim.

When job loss is a problem, they punish the unemployed by taking away their unemployment compensation.

When poverty is a problem, they punish the poor by taking away food stamps and other anti-poverty benefits.

When street crime is a problem, they punish the people protesting by sending in the Gestapo to gas, beat, and drag them off in unmarked cars.

See if you can follow this unemployment compensation logic:

The Trump/GOP repeatedly engages in the self-replicating exercise of punishment for failing to do the impossible, followed by more punishment and inevitable failure.

The problem is not that people refuse to work. There is no shortage of willing workers.

The problem is we have far more willing workers than jobs.

Punishing people for not going to work, will not address this problem.

Too many businesses and too many consumers do not have enough money to survive.

But for the right wing, the temptation to punish the poor is too delicious to resist. It just feels so good to keep blaming the victims while widening the Gap in an endless, immoral, and disgusting game of Gap Psychology.

You probably have noticed that street crime occurs more often in poor neighborhoods than in rich neighborhoods.

That should give you and other intelligent and compassionate people something of a clue about how to prevent street crime. Unfortunately, the Trump/GOP lacks those kinds of people.

The politicians, especially the right wing, are nothing if not consistent in their brutal approach to the poor.

Is it because poor people simply are born criminals?

Among the victims of street crime are the criminals themselves.

No one is born a criminal. People become street criminals because they lack the money that provides for a stable family life.

They lack the money to purchase good housing,  good food, good clothing, a good education, and maybe even a few of the luxuries of life.

Impoverished young people, who are forced to do without, see other young people flaunting luxuries because they rob and they deal drugs.

The Trump/GOP view about the way to stop street crime is to beat the poor into submission.

Street crime correlates with lack of money, so the real cure for street crime is to provide the poor with enough money to allow them to live, not just a bare existence, but a rewarding life.

The Trump/GOP solution to the poverty that always leads to street crime is to increase the poverty by punishing the poor.

To the Trump/GOP, it must be ever-so-satisfying to complain about how “they” (the poor) are lazy, shiftless people always looking for a handout, getting drugged up, and shooting each other in frustration at their poverty.

And oh yes, a tiny handful do manage to escape the ghetto and the bigotry that presses them down. Those are the few who become successful.

To the Trump/GOP this “proves” it can be done, if only “they” (the poor) would try harder to climb up from the hole, while the government tromps down on their fingers.

The rich protest with attorneys. The poor protest in the street.

The blatantly unfair treatment of blacks and browns by law enforcement cannot be overlooked or excused.

Yes, the police have a difficult job, but sowing hatred of police brutality victims — black or not — surely will not make policing easier.

The Black Lives Matter protesters have a legitimate claim, and the fact that criminals and false-flag white supremacists have taken advantage of the BLM protests does not make their claim any less valid.

To the right wing, protesters are troublemakers, disturbing the peace with their loud, messy and inconvenient actions.

Worst of all, they sometimes destroy the idol of the rich: Valuable property.

If there is one thing the Trump/GOP values above life itself, it’s valuable property. That is why there is so little concern about children catching COVID in schools, but fierce anger about burning buildings.

So long as the slumlords are able to squeeze profits out of decaying, disease-ridden apartments in the ghetto, the Trump/GOP is unconcerned.

But let some protesters burn down any valuable piece of property, especially the moneymaking ones, and the rich are outraged. How dare those people destroy things that are worth money.

So, President Trump sent his unnamed, masked stormtroopers, in unmarked cars and camouflage (Who needs camouflage in the middle of a city?), to gas and nab people off the streets of Portland, even those people who were not committing any kind of crime.

He wanted to go after what he saw as violent gang leaders, flush them out of hiding in ways that would have them “shaking in their boots” like they never had before, and have alleged perpetrators marched out in front of the news cameras.

The president said he wanted something similar to what his administration has done in Portland, an ongoing melee between protesters and rioters and unmarked federal authorities.

Brave Donald Trump of bonespurs fame, wanted to hear clubs crash against skulls and to see blood run in the streets — from a safe distance, of course.

In America, when people protest, they usually have good reason. No one risks life, limb and pain to protest for nothing.

The solution to protests is to listen to what the people say about their problems, and then help them solve the problems. That is the fundamental reason why people form governements.

Despite chirping sarcasm from the Trump/GOP, the urgent need for a “Black Lives Matter” protest is to remind us about sad truth of American history.

From slavery to lynching, to ongoing police brutality, the Trump/GOP has pretended that black lives really don’t matter.

Rather than us being outraged at the protests, we all should admire the many decades-long patience with the bigoted mistreatment blacks have suffered.

Only in a dictatorship, which Trump admires (being “in love with” Kim and Putin), does the government solve protests by sending in the goons to beat the people down so they will be terrified to protest in the future.

Sometimes, protests involve something else the Trump/GOP hates: Whistleblowers.

In the Trump/GOP world, a good person is one who says nothing when seeing evil, or one who even participates in the crime.

Honest heroes like Lt. Col. Alexander Vindman are punished for being a whistleblower.

The Trump/GOP was so outraged by this honesty, they not only punished Vindman, but also punished his brother, who was not even involved.

By contrast, convicted criminals like Roger Stone are rewarded.

In summary, the Trump/GOP invariably addresses the social problems of the poor and middle-income people with anger, humiliation and violence.

A Monetarily Sovereign nation like the U.S., having unlimited financial and political power, also has the unlimited ability to solve most social problems without force against the very people who are being abused. (See the Ten Steps to Prosperity, below.)

Only a proven psychopath and his psychopathic political party would devote their efforts toward punishing poor victims and rewarding the victimizers.

2 thoughts on “The Trump/GOP solution to all problems: Punish the victim.”