The post, “Your periodic reminder. After 80 years, the federal debt still is a “ticking time bomb,” 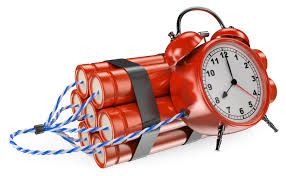 was a September 6, 2020, update to earlier posts, all showing the same thing:

Since 1940, economists and other misguided folks have lamented the growth of the U.S. federal debt, calling it a “ticking time bomb.”

After 83.5 years, the federal debt still is being called a “time bomb.” Having not exploded, it is the slowest time bomb in history.

We don’t need to go into too much detail. We’ve said it often enough:

The former has the unlimited ability to create dollars. The latter, like you, and me, and the states can become insolvent. Vast difference.

So every year, every month, perhaps every day, we see warnings like this:

To offset the pandemic-induced “Great Cessation,” the US Federal Reserve and Congress have marshalled staggering sums of stimulus spending out of fear that the economy would otherwise plunge to 1930s soup kitchen levels.

The 2020 federal budget deficit will be around 18 per cent of GDP, and the US debt-to-GDP ratio will soon hurdle over the 100 per cent mark.

Such figures have not been seen since Harry Truman sent B-29s to Japan to end World War II.

Assuming that America eventually defeats COVID-19 and does not devolve into a Terminator-like dystopia, how will it avoid the approaching fiscal cliff and national bankruptcy?

To answer such questions, we should reflect on the lessons of World War II, which did not bankrupt the US, even though debt soared to 119 per cent of GDP. By the time of the Vietnam War in the 1960s, that ratio had fallen to just above 40 per cent.

World War II was financed with a combination of roughly 40 per cent taxes and 60 per cent debt.

It all is utter nonsense, exactly the same nonsense that has been published and spoken by self-anointed “experts, since 1940. Every year, those same-old warnings about the same-old “ticking time-bomb” that never seems to go off.

It would be laughable if not for the fact that many people still believe this stuff.

World War II was not financed with taxes or debt. It was financed the same way all federal spending is financed: The federal government, being Monetarily Sovereign, pays all its bills by creating new dollars, ad hoc.

Federal taxes are destroyed upon receipt. The tax check you send to the federal government is taken from your share of the M1 money supply. The instant it is received by the Treasury, it ceases to be part of any money supply measure, thus it effectively is destroyed.

Federal “debt” actually is deposits into T-security accounts, the dollars in which are not taken by the federal government.

Here is a partial list of the “boy-who-cried-wolf” calls that have emanated from the debt scare-mongers.

September, 1940, the federal budget was a “ticking time-bomb which can eventually destroy the American system,” said Robert M. Hanes, president of the American Bankers Association.

By 1983: “The debt probably will explode in the third quarter of 1984,” said Fred Napolitano, former president of the National Association of Home Builders.

Later in 1985: Los Angeles Times: “We labeled the deficit a ‘ticking time bomb’ that threatens to permanently undermine the strength and vitality of the American economy.”

Later in 1987: The Dallas Morning News: “A fiscal time bomb is slowly ticking that, if not defused, could explode into a financial crisis within the next few years for the federal government.”

In 1992: The Pantagraph – Bloomington, Illinois: “I have seen where politicians in Washington have expressed little or no concern about this ticking time bomb they have helped to create, that being the enormous federal budget deficit, approaching $4 trillion.”

Later in 1992: Ross Perot: “Our great nation is sitting right on top of a ticking time bomb. We have a national debt of $4 trillion.”

In 1995: Kansas City Star: “Concerned citizens. . . regard the national debt as a ticking time bomb poised to explode with devastating consequences at some future date.”

In 2003: Porter Stansberry, for the Daily Reckoning: “Generation debt is a ticking time bomb . . . with about ten years left on the clock.”

In 2004: Bradenton Herald: “A NATION AT RISK: TWIN DEFICIT A TICKING TIME BOMB”

In 2005: Providence Journal: “Some lawmakers see the Medicare drug benefit for what it is: a ticking time bomb.”

In 2006: NewsMax.com, “We have to worry about the deficit . . . when we combine it with the trade deficit we have a real ticking time bomb in our economy,” said Mrs. Clinton.

In 2007: USA Today: “Like a ticking time bomb, the national debt is an explosion waiting to happen.”

In 2010: Heritage Foundation: “Why the National Debt is a Ticking Time Bomb. Interest rates on government bonds are virtually guaranteed to jump over the next few years.

In 2011: Washington Post, Lori Montgomery: ” . . . defuse the biggest budgetary time bombs that are set to explode.”

June 19, 2013: Chamber of Commerce: Safety net spending is a ‘time bomb’, By Jim Tankersley: The U.S. Chamber of Commerce is worried that not enough Americans are worried about social safety net spending. The nation’s largest business lobbying group launched a renewed effort Wednesday to reduce projected federal spending on safety-net programs, labeling them a “ticking time bomb” that, left unchanged, “will bankrupt this nation.”

On January 27, 2017: America’s “debt bomb is going to explode.” That’s according to financial strategist Peter Schiff. Schiff said that while low interest rates had helped keep a lid on U.S. debt, it couldn’t be contained for much longer. Interest rates and inflation are rising, creditors will demand higher premiums, and the country is headed “off the edge of a cliff.”

[The following were added after the original publishing of this article]

April 10, 2019, The National Debt: America’s Ticking Time Bomb.  TIL Journal. Entire nations can go bankrupt. One prominent example was the *nation of Greece which was threatened with insolvency, a decade ago. Greece survived the economic crisis because the European Union and the IMF bailed the nation out.

SEP 12, 2019, Our national ticking time bomb, By BILL YEARGIN
SPECIAL TO THE SUN SENTINEL | At some point, investors will become concerned about lending to a debt-riddled U.S., which will result in having to offer higher interest rates to attract the money. Even with rates low today, interest expense is the federal government’s third-highest expenditure following the elderly and military. The U.S. already borrows all the money it uses to pay its interest expense, sort of like a Ponzi scheme. Lack of investor confidence will only make this problem worse.

JANUARY 06, 2020, National debt is a time bomb, BY MARK MANSPERGER, Tri City Herald | The increase in the U.S. deficit last year was about $1.1 trillion, bringing our total national debt to more than $23 trillion! This fiscal year, the deficit is forecasted to be even higher, and when the economy eventually slows down, our annual deficits could be pushing $2 trillion a year! This is financial madness.there’s not going to be a drastic cut in federal expenditures — that is, until we go broke — nor are we going to “grow our way” out of this predicament. Therefore, to gain control of this looming debt, we’re going to have to raise taxes.

February 14, 2020, OMG! It’s February 14, 2020, and the national debt is still a ticking time bomb!  The national debt: A ticking time bomb? America is “headed toward a crisis,” said Tiana Lowe in WashingonExaminer.com. The Treasury Department reported last week that the federal deficit swelled to more than $1 trillion in 2019 for the first time since 2012. Even more alarming was the report from the bipartisan Congressional Budget Office (CBO) predicting that $1 trillion deficits will continue for the next 10 years, eventually reaching $1.7 trillion in 2030

August 29, 2020, LOS ANGELES, California: America’s mountain of debt is a ticking time bomb  The United States not only looks ill, but also dead broke. To offset the pandemic-induced “Great Cessation,” the US Federal Reserve and Congress have marshalled staggering sums of stimulus spending out of fear that the economy would otherwise plunge to 1930s soup kitchen levels. Assuming that America eventually defeats COVID-19 and does not devolve into a Terminator-like dystopia, how will it avoid the approaching fiscal cliff and national bankruptcy?

April 16, 2021, NATIONAL POLICY: ECONOMY AND TAXES / MARK ALEXANDER /
The National Debt Clock: A Ticking Time Bomb: At the moment, our national debt exceeds $28 TRILLION — about 80% held as public debt and the rest as intragovernmental debt. That is $225,000 per taxpayer. Federal annual spending this year is almost $8 trillion, and more than half of that is deficit spending — piling on the national debt.

April 29, 2022, Don’t Wait! The National Debt Is Only Getting Worse
New CBO report shows that the longer Congress waits to deal with the debt, the bigger the problem becomes. By Eric Boehm: In short, taxes will have to go up and government services—including benefits from programs like Social Security and Medicare will likely have to be reduced. Debt-watchers have been warning for years that benefit cuts and tax increases will likely be needed to have any realistic shot at managing America’s long-term debt. (And, remember, we’re talking about what’s needed to merely stabilize the debt, not reduce or eliminate it).

Actually “debt-watchers have mongered the same warning for at least 82.5 years, and here we are, still growing and still no explosion from the mythical “debt bomb.”

Actually, if/when we do reduce the federal debt, we will have the same results we always have had: A recession or more likely, a depression:

Seemingly, that is what the “debt-watchers” want.

3 thoughts on “A supplement to: “Your periodic reminder. After 80 years, the federal debt still is a ‘ticking time bomb.’””