Here are excerpts from an article that ran online today, 1/129/2022: Medicare Isn’t Free

In a video interview, Dana Anspach, the founder and president of Sensible Money, explained the components of Medicare and the costs associated with Part B and Part D.

Medicare Part A, often referred to as hospital insurance, is free if you worked enough years in the U.S. to qualify. “Typically, if you’re eligible for Social Security benefits, you’re also eligible for Medicare Part A at no cost,” said Anspach.

This would be true if the federal government hadn’t socked you and your employer for FICA taxes, which purportedly fund Medicare and Social Security.

In reality, these taxes fund nothing. The federal government creates new dollars ad hoc, every time it pays an invoice.

Quote from Ben Bernanke when, as Fed chief, he was on 60 Minutes:
Scott Pelley: Is that tax money that the Fed is spending?
Ben Bernanke: It’s not tax money… We simply use the computer to mark up the size of the account.

Medicare Part B covers other services and supplies, and it has a monthly cost that varies depending on your income.

When you pay federal taxes, dollars come out of your checking account. These dollars come from an money-supply measuren called “M1.”

When the Treasury receives your M1 dollars, they cease to be part of any money-supply measure. The reason: It is impossible to measure the amount of money the Treasury “has,” given that the government has the infinite ability to create its own sovereign currency, the U.S. dollar.

So those M1 dollars effectively are destroyed upon receipt.

And there is Part D, for prescriptions, and it is free if your income is low enough, but it has a cost once your income exceeds various threshold amounts.

The following chart outlines the payments — the unnecessary payments — you are forced to make in order to receive medical benefits from the federal government. 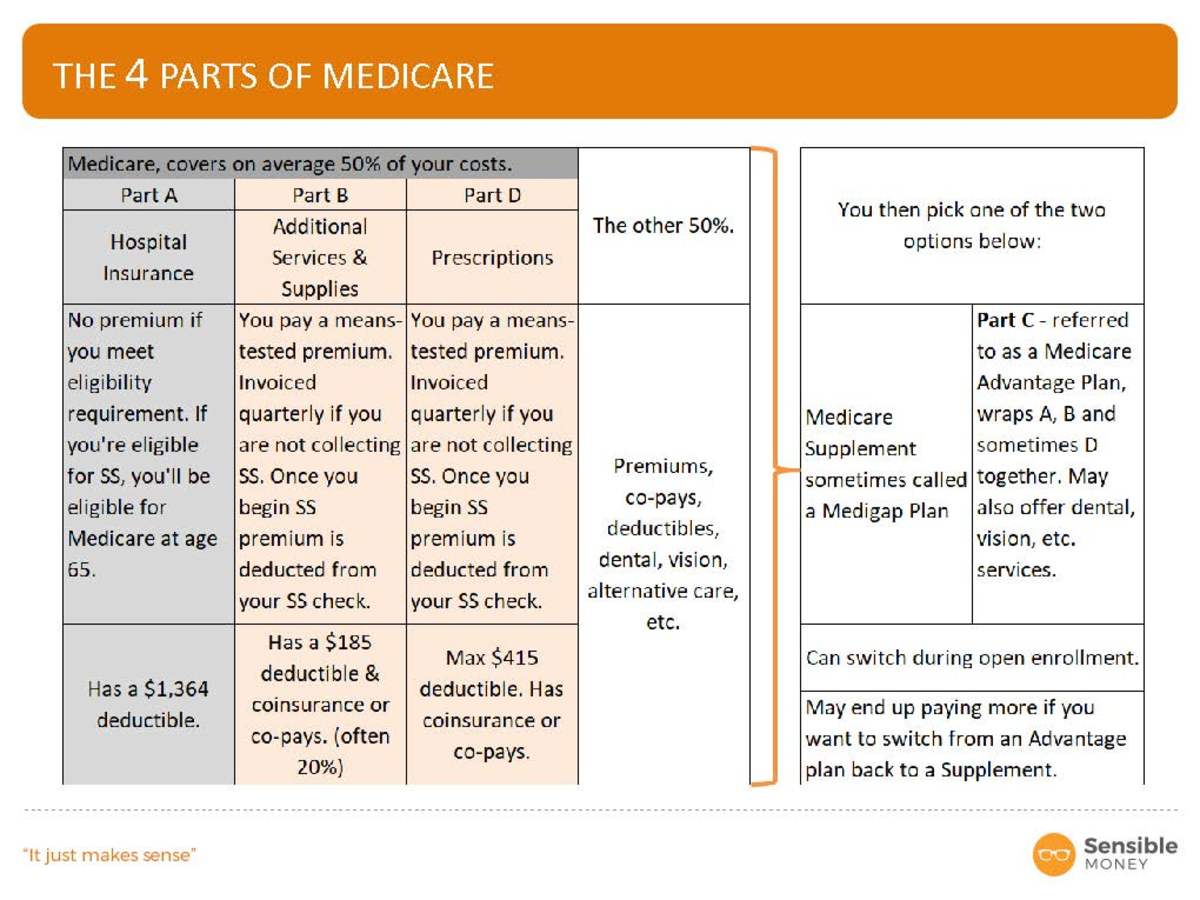 You have been brainwashed into believing the federal government, which created the U.S. dollar from thin air, now somehow can short of the dollars it created.

So, you are led to believe it financially is necessary for the federal government to receive your dollars, to pay for services.

It isn’t. The federal government has neither the need nor the use for your dollars. It has the infinite ability to create new dollars.

That is how it is able to sustain a debt of $25 trillion with no worries at all.

You are swayed by reasonable-sounding complexity:

“Like so many things associated with retirement, it’s more complicated than you may think

“First, the Social Security office references your tax return data from two years prior to determine your premium level, so if 2022 is your first year enrolling in Medicare, they will use data from your 2020 tax return.”

‘Now, if your MAGI exceeds additional threshold amounts, your premiums will be higher. ‘This is referred to as means testing and is technically called the IRMAA. You are notified of your premium amounts via a letter from the Social Security office called your Initial Determination Letter, said Anspach.

So many caveats; so many details. And it’s all a lie. The federal government destroys your FICA dollars and deductions from Social Security the moment they are received.

The federal government easily could and should pay for Medicare Part A, Part B, and Part D without charging you anything.

So why does the government force you to send it dollars that it destroys?

The following chart, from the aforementioned article, contains a hidden clue: 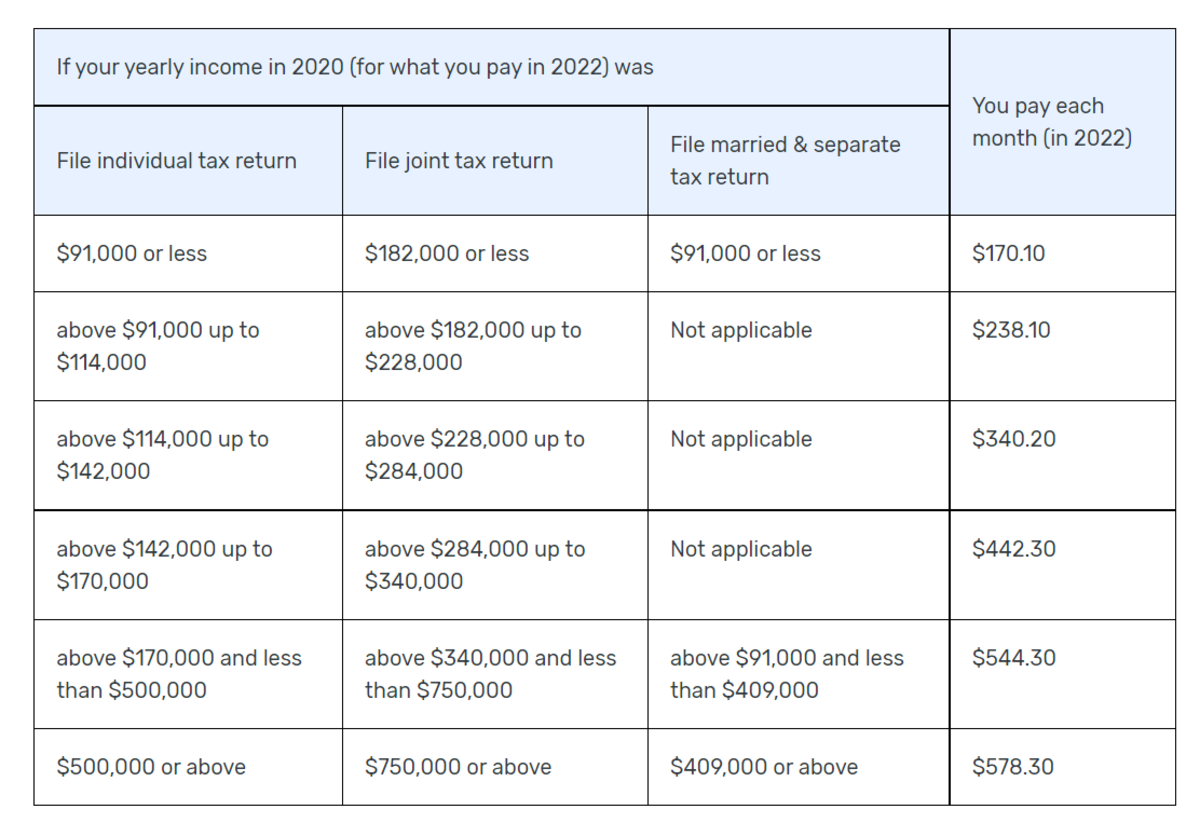 Did you see the clue?

Look at the last line. There is a ceiling on payments above a certain amount of income. That is, the person who makes a half million, or a million, or a  hundred million dollars a year pays the same.

The increases in payments stop at a certain level.

This is the same trick the government uses when calculating FICA payments. In 2021, employees pay a 6.2% Social Security tax (with their employer matching that payment) on income up to $142,800. Any earnings above that amount are not subject to FICA tax.

The very rich are never satisfied. They always want to be richer.

“Rich” is a comparative. There are two ways to become richer: Obtain more for yourself or widen the income/wealth/power Gap between you and those below you by forcing them to receive less.

Because the very rich control the U.S. government, Congress and the President are only too happy to oblige by setting a ceiling on payments to the government.

As a share of disposable income, the rich pay far less than do you.

This effectively widens the Gap, thus making the rich richer.

Think of the ways in which the federal government helps make the rich, richer:
1. The federal government collects an unnecessary income tax loaded with tax breaks for the rich. Note how Donald Trump, despite earning billions, paid zero federal in ten of fifteen years. This is typical, not an exception.
2. It collects an unnecessary and huge FICA tax from salaried employees and their employers, not from dollars earned in non-salaried remunerations — more representative of the rich.
3. Employers count the FICA they pay as being part of salaries, thus reducing paid salaries.
4. Despite the fact that Social Security is quasi-insurance, ostensibly paid for by FICA, the government collects proportionately more taxes from lower-income people.
5. Lower-income people generally work for salaries that are taxed at the highest rates. Other forms of income, more usual for the rich, are taxed at lower rates or not taxed at all.
6. Wealth generally is not taxed.
7. Tax loopholes available primarily to the rich.
7. Tax complexity is intentional. It allows the rich, who can afford expensive tax accountants and lawyers, to take advantage of arcane tax laws, not understood by the general public.
8. Student loans. The rich can pay tuition. The not-rich are burdened by loans.
Keep in mind that all of the above taxation and fees, together with limits on federal benefits, are unnecessary. The federal government neither needs nor uses tax dollars, and its spending is not financially limited.
The rich want you to believe that federal finances, which are Monetarily Sovereign, are the same as state/local government finances, which are monetarily non-sovereign.
The fundamental difference is that the spending by state and local governments is limited by income from tax receipts and borrowing. Federal spending is not limited by any form of income.
The Federal government doesn’t need your hard-earned dollars. Ignorance is expensive.

8 thoughts on “What you pay for ignorance of federal financing. Part II”