“The Balance makes personal finance easy to understand. It is home to experts who provide clear, practical advice on managing your money.

“With more than 24 million monthly visitors, The Balance is among the top-10 largest finance properties. Our more than 50 expert writers have extensive qualifications and expertise in their topics, including MBAs, PhDs, CFPs, other advanced degrees and professional certifications.

“The Balance family of sites have been honored by multiple awards in the last year, including The Telly Awards, The Communicator Awards, and Eppy Awards.”

That is truly impressive — 24 million people every month, 50 expert writers, multiple awards, college degrees. They are a major source of information for the public.

KIMBERLY AMADEO
US Economy Expert
Kimberly is the author of The Obamacare Handbook and Beyond the Great Recession, and has been quoted as an economic expert by Fox Business, US News and World Report, and The Huffington Post.

She has authored hundreds of articles on economic topics ranging from health care reform to monetary policy to global trade. Kimberly has been the U.S. Economy Expert for The Balance, and prior to that, About.com, since 2006.

In addition, Kimberly has more than 20 years of senior-level corporate experience in economic analysis and business strategy, and received an M.S. in Management from the Sloan School of Business at M.I.T.

With that introduction, let us see what Ms. Amadeo has to say. Here are a few excerpts from one of this year’s articles:

US Federal Government Tax Revenue
Who Really Pays Uncle Sam’s Bills?
BY KIMBERLY AMADEO Updated May 18, 2019
The U.S. government’s total revenue is estimated to be $3.643 trillion for Fiscal Year 2020.

That’s the most recent budget forecast from the Office of Management and Budget for October 1, 2019, through September 30, 2020.

We pause to remind you that the federal government, which uniquely being Monetarily Sovereign and having the unlimited ability to create U.S. dollars, neither needs nor uses your tax dollars.

The federal government, unlike state and local governments, never unintentionally can run short of dollars. 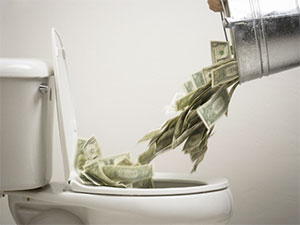 Taking more than $3.6 trillion from the economy every year represents a giant economic loss.

Visualize the effect of dumping more than $3.6 trillion down the toilet, every year.  That is what your federal taxes accomplish.

Continuing with excerpts from Ms. Amadeo’s article, I’ll comment directly to her:

So where does the federal government’s revenue come from? Individual taxpayers like you provide most of it. Income taxes contribute $1.822 trillion, over half of the total. Another third, $1.295 trillion, comes from your payroll taxes.

Corporate taxes add $256 billion, only 7%. The Tax Cut and Jobs Act cut taxes for corporations much more than it did for individuals. In 2015, corporations paid 11% and income taxpayers paid 47%.

The best way to reduce the individual tax burden is to reduce government spending, not shift the burden to corporations.

The government’s annual income only pays for 77% of spending. It creates a $1.1 trillion billion budget deficit.

The $1.1 trillion budget deficit inserts $1.1 trillion growth dollars into the economy. It more properly should be called an economic surplus.

And, Ms. Amadeo, the federal government’s annual income pays for nothing. The government creates brand new dollars, ad hoc, every time it pays a creditor.

The instant the bank does as instructed, new dollars are created and added to the nation’s money supply. Deficit spending is the federal government’s primary method for creating economic growth dollars.

Shouldn’t Congress only spend what it earns, just like you and me?

Here, Ms. Amadeo, you had the perfect opportunity to explain the difference between a Monetarily Sovereign federal government’s finances,  and a monetarily non-sovereign individual’s finances.

While a Monetarily Sovereign entity never can run short of its own sovereign currency, I have no sovereign currency. So my income is less than my spending, I can run out of money. The federal government can’t.

Since the federal government neither needs nor uses income, and can create unlimited amounts of money, there is absolutely no reason for Congress to spend what it earns.

By failing to explain this difference, Ms. Amadeo, you help perpetuate the Big Lie of federal –  personal finance equivalence. Unfortunately, you expound upon the Big Lie, and write the single, most wrong-headed, completely false paragraphs in the entire article:

It depends on where the economy is in the business cycle. Congress should use deficit spending to boost economic growth in a recession. It uses stimulus spending to create jobs.

Once the recession is over, the government should live within its means and spend less. It should raise taxes, if needed, to reduce the deficit and the debt. That will keep the economy from overheating and forming dangerous bubbles. Congress should switch from expansionary to contractionary fiscal policy.

Think about it, Ms. Amadeo. Why would Congress want to “boost economic growth” only “in a recession”? It makes no sense at all. And later in your article, you contradict yourself on this point.

Today, as I write this comment, we are not in a recession. Why would I not want to “boost economic growth, today?

And stimulus spending creates jobs by growing the economy and by providing the goods and services the populace desires. Why is this a bad thing?

After missing the opportunity to educate, Ms. Amadeo, you execute a confused turnaround and write:

If that much production is going to the federal government, then you want to make sure it’s reinvested into the economy to support future growth.

Let’s examine that last phrase. “It” (federal tax revenue”) is not reinvested in anything. It is destroyed upon receipt.

Revenues would be much higher without the Trump tax plan. It was also lowered by the extension of the Bush tax cuts and the Obama tax cuts. They were meant to fight the 2001 recession and the 2008 recession.

They were supposed to spur the consumer spending that drives almost 70% of economic growth.

But most people didn’t even realize this happened since the tax cut showed up as reduced withholding instead of a check.

Instead of spending the cuts, people used some of it to pay off debt. The recession scared people into saving more and using credit cards less. So, the budget didn’t expand enough to spur economic growth.

Now that the recession is over, those tax cuts should be reversed. Taxes should be increased, not cut.

An economic expansion is the time to pay off the debt, not add to it.

Uh, Ms. Amadeo, news flash: The recession has been “over” for 11 years. It ended because of federal deficit spending. Now you want to create another deficit by taking more dollars out of the economy?

And exactly why do you want to pay off the federal debt?

First, the federal government never can run short of dollars, so why does the “debt” trouble you?

Second, the so-called “debt” isn’t really debt in the classic sense. The federal debt is the total of deposits into Treasury Security (T-bill, T-note, T-bond) accounts, which are paid off every day, simply by returning the dollars in those accounts.

What is a burden on taxpayers? Taxes.

IN SUMMARY
Kimberly Amadeo and THE BALANCE claim to reach more than 24 million readers each month. This platform would give them an excellent opportunity to educate the populace and to dismiss pernicious and damaging myths about the American economy.

Instead, out of ignorance or intent, they have chosen to perpetuate the Big Lie that federal finances are like personal finances, and that stimulative federal deficit spending should be reduced and limited to times of recession.

The Big Lie has led to many trillions of dollars unnecessarily being taken from the economy, a depletion that has resulted in repeated recessions and even depressions through the years.

Millions of people every month, rather than being enlightened, are told the world is flat.

5 thoughts on “Every month, millions of people are told the earth is flat”