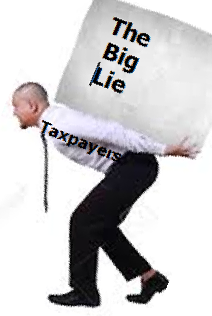 The Big Lie sometimes is stated, “Our children and grandchildren will have to pay for today’s federal deficits and debt.”

The Big Lie is told, and believed, for one simple reason: Most people do not understand the differences between federal government (Monetarily Sovereign) finances and all other (monetarily non-sovereign) finances.

You, your business, your state, county, and city all are monetarily non-sovereign.

When you want to spend, you need a source of money, which for local governments mostly is taxes and borrowing.

By contrast, the federal government is Monetarily Sovereign.

When it wants to spend, it neither needs nor uses any source of money.

It creates new money by paying creditors, exactly the opposite of what you personally are accustomed to.

Although the federal government collects tax dollars, it no longer needs to.

That change occurred in August, 1971, when President Richard Nixon, in the greatest act of his Presidency, took us off a gold standard.

Contrary to popular wisdom, federal taxpayers are not “on the hook” for federal deficits (which in fact are private sector surpluses) or for federal debt (which is nothing more than deposits in accounts at the Federal Reserve Bank).

You or your grandchildren do not owe the federal deficit or debt, and you never will pay for them. Period.

That said, please read the following excerpts from an article that appeared in the March 18, 2021 edition of the Chicago Tribune:

We don’t need Biden’s infrastructure binge
Steve Chapman, a member of the Tribune Editorial Board

Donald Trump did many bad things as president, but he deserves a smidgen of credit for what he didn’t do: go on an infrastructure spending binge.

He vowed that under him, our roads, bridges and waterways would be “the envy of the world.” He said that in 2016 and was still saying it in 2020. But his main achievement was to make “infrastructure week” a source of hilarity.

Now President Joe Biden is hoping to do what Trump didn’t do, and he has support from such divergent groups as the AFL-CIO and the U.S. Chamber of Commerce.

During his campaign, he made gaudy promises to “transform” our transportation networks, “revolutionize” railroads and urban transit, and upgrade water systems, broadband, bike lanes, home weatherization and just about anything else you could think of. Biden could make the Pledge of Allegiance an infrastructure issue.

His price tag for all this? Two trillion dollars. His plan to pay for it? Unspecified.

The two trillion dollars would be created by the federal government, then distributed as growth dollars to the private sector.

Biden would pay for it exactly the same way the federal government pays for everything: It creates dollars, ad hoc.

Specifically, to pay any bill:

The federal government creates instructions from thin air, then sends those instructions (in the form of a check or wire transfer) to the creditor’s bank, instructing the bank to increase the creditor’s checking account balance by a specified amount (“Pay to the order of _______“)

When the bank clicks a computer key to increase the numbers in the creditor’s checking account, this instantly creates brand new dollars that are added to the nation’s money supply, in a segment known as “M1.”

The bank then balances its books by clearing the instructions through the Federal Reserve, which always approves federal instructions.

No tax dollars are involved at any point in this transaction. The whole process is paid for by newly created dollars.

The White House has indicated a preference for tax increases on the wealthy and corporations. When asked recently how she and her fellow Republicans would react to that idea, Sen. Susan Collins reportedly “burst out laughing.”

Why? The real purpose of the Big Lie is to convince you, the public, that the federal government’s ability to provide benefits to you is limited. This is to keep you from asking for free Medicare for All, free College for All, support for local governments to cut local taxes — indeed for any benefit to the not-rich.

The very rich, who run America, are motivated by “Gap Psychology,“ the desire to get richer by distancing oneself from those who have less wealth. The rich pay politicians (via political contributions and promises of jobs afterward), university economists (via lucrative jobs and contributions to universities), and the media (via ownership and advertising dollars) to disseminate the Big Lie.

We are told that our highways and bridges are falling apart from lack of investment and that upgrading them will not only create jobs but boost our economic productivity.

But the Reason Foundation, which issues a detailed report each year on the nation’s highways, found that the percentage of urban interstates rated in poor condition was lower in 2018 than a decade earlier.

Likewise with rural interstates. For other major rural highways, just 1.23% were in bad shape in 2018.

The foundation’s most recent report found that “the general quality and safety of the nation’s highways has incrementally improved as spending on state-owned roads increased by 9%, up to $151.8 billion” compared with the previous year.

The Reason Foundation is a libertarian organization that opposes virtually all government spending. Their research results tend to be slanted in that  direction.

Nevertheless, even the possibility that our roads and highways may be in less bad condition, does not indicate the federal government should not improve them. Americans live longer today than they did years ago. So should the government not have paid for the CORONA virus vaccine?

And what about those jobs infrastructure work creates?

Bridges? Notes Brown University economist Matthew A. Turner in The Milken Institute Review, “There were more bridges in good condition and fewer crumbling bridges in 2017 than in 1992.” Mass transit? The average age of public transit buses has declined during that period.

As always with the Big Lie, one simple point is missed. When the states fix roads and bridges, state taxpayers must take dollars from their pockets to pay for these repairs.

When the federal government pays, it puts new dollars into the private sector.

Then we come to the faux moral excuse for the Big Lie:

Even if the United States needs more investment in particular areas, that doesn’t mean the federal government should pick up the tab. The great majority of infrastructure assets are owned by state and local governments, and it’s their constituents who would gain the most from resurfacing roads or bolstering bridges.

If they are going to reap the economic benefits of such investments, shouldn’t they be willing to pay for them?

Yes, shame on you for wanting the federal government, which has infinite money, to pay, when you, who have limited money should want to pay, that is, if you are a good person. Right?

In fact, they seem to be unwilling. The Center on Budget and Policy Priorities reports, “State and local infrastructure spending as a share of gross domestic product is at its lowest point since the early 1980s.”

Apparently, the author believes state and local taxes are too low. After all, the only place the state governments can find the money for infrastructure repair is via taxes, so when states are “unwilling,” it merely means their taxes are too low.

But the fact that these governments don’t want to use their own money doesn’t mean they won’t be happy to use cash that falls out of the sky.

That’s the political beauty of federal infrastructure packages: The benefits are obvious to people getting new projects, but the costs are invisible.

The author doesn’t realize it, but his “falls out of the sky” intended pejorative, actually comes close to the truth. The federal government, creates dollars from nothing, as it always has — just as it created the very first dollars, when America began.

Where does the author think the first dollars came from? In the late 1770s, there existed zero dollars. Ten years later, there were millions. Where did they come from if not from “out of the sky,” i.e. created from thin air by laws (which also are created from thin air) passed by the federal government?

The timing of this push is also awkward, because the COVID-19 catastrophe creates so much uncertainty about how we will live, work and travel going forward.

“I’m not sure that at this time we want to be pouring concrete or buying equipment until we see how much of this shakes out for a year or two,” University of Chicago economist Allen Sanderson told me.

“Shakes out”? Does Sanderson believe roads will not need to be fixed? Does he believe public transportation will become obsolete? And how long is this “shake-out” period? Will we know something more next year, so don’t fix roads for a year?

Or will we have to wait a decade to learn what our long-term needs will be?

Of course, the University of Chicago economists are notorious for not understanding the differences between Monetary Sovereignty and monetary non-sovereignty, so Sanderson’s remarks, though totally wrong, are not unexpected.

No, Mr. Chapman, the one thing worse than an infrastructure push that fails is a columnist who, knowing nothing about Monetary Sovereignty, always tells his readers, “Now is not the time to spend.”

But if not now, when? Ever?

3 thoughts on “How the Big Lie in economics seriously impacts your life, today and will again, tomorrow.”