Each is based on progressively providing money to the lower wealth/power groups.

But, the rich repeatedly evade the most restrictive elements of these plans or they reduce the progressive benefits. Either way, the Gap continues to grow.

Socialism and communism, the ultimates of progressivism, devolve to totalitarianism.

A progressive income tax inevitably becomes loaded with special exemptions for the rich.

Progressive social benefits falsely are derided as “unaffordable” and sloth-enabling. Charities help but are woefully inadequate and often too focused on narrow intent.

The reason for the failure of our most well-intentioned, Gap-narrowing efforts can be summarized in two words: “Political power.”

Their political power stems from the money they use to bribe America’s thought-leaders — the politicians, the media, and the economists.

The November, 2018 edition of Scientific American Magazine contained articles about the “Inequality” (Gap) problem. Here are some excerpts.

The American Economy Is eRigged
By Joseph E. Stiglitz on November 1, 2018

Economic inequality is higher in the U.S. than in virtually all other advanced countries.
The American political system, coupled with high initial inequality, gave the moneyed enough political influence to change laws to benefit themselves, further exacerbating inequality.

Breaking this feedback loop by curbing the power of money in politics is essential to reducing inequality and restoring hope.

By most accounts, the U.S. has the highest level of economic inequality among developed countries. It has the world’s greatest per capita health expenditures yet the lowest life expectancy among comparable countries.

The notion of the American Dream—that, unlike old Europe, we are a land of opportunity—is part of our essence. Yet the numbers say otherwise. The life prospects of a young American depend more on the income and education of his or her parents than in almost any other advanced country.

Things appear to be getting worse, partly as a result of forces, such as technology and globalization, that seem beyond our control, but most disturbingly because of those within our command.

It is not the laws of nature that have led to this dire situation: it is the laws of humankind. Markets do not exist in a vacuum: they are shaped by rules and regulations, which can be designed to favor one group over another.

President Donald Trump was right in saying that the system is rigged—by those in the inherited plutocracy of which he himself is a member. And he is making it much, much worse.

The recent example is the GOP’s recent “Tax Cuts and Jobs Act (TCJA)” that is heavily skewed toward benefiting the richand widening the Gap.

Wages at the bottom, adjusted for inflation, are about the same as they were some 60 years ago! In fact, for those with a high school education or less, incomes have fallen over recent decades.

Even more important than income, is wealth. Income can be transitory, sometimes relevant to only a year or less. But wealth, too often, is passed from generation to generation, because our laws encourage it.

Families in the bottom 50 percent hardly have the cash reserves to meet an emergency.

Newspapers are replete with stories of those for whom the breakdown of a car or an illness starts a downward spiral from which they never recover.

Defenders of America’s inequality refer to the workings of a competitive market, where the laws of supply and demand determine wages, prices and even interest rates—a mechanical system, much like that describing the physical universe.

Those with scarce assets or skills are amply rewarded, they argue, because of the larger contributions they make to the economy.

What they get merely represents what they have contributed. Often they take out less than they contributed, so what is left over for the rest is that much more.

This fictional narrative may at one time have assuaged the guilt of those at the top and persuaded everyone else to accept this sorry state of affairs.

Perhaps the defining moment exposing the lie was the 2008 financial crisis, when the bankers who brought the global economy to the brink of ruin with predatory lending, market manipulation and various other antisocial practices walked away with millions of dollars in bonuses just as millions of Americans lost their jobs and homes and tens of millions more worldwide suffered on their account.

Virtually none of these bankers were ever held to account for their misdeeds.

Fundamentally, the Gap problem boils down to wealth and political power. The wealthy bribe accommodating politicians to pass wealth-friendly laws.

Since the mid-1970s the rules of the economic game have been rewritten, both globally and nationally, in ways that advantage the rich and disadvantage the rest.

And they have been rewritten further in this perverse direction in the U.S. than in other developed countries—even though the rules in the U.S. were already less favorable to workers.

From this perspective, increasing inequality is a matter of choice: a consequence of our policies, laws and regulations.

Weak corporate governance laws have allowed chief executives in the U.S. to compensate themselves 361 times more than the average worker, far more than in other developed countries.

Financial liberalization—the stripping away of regulations designed to prevent the financial sector from imposing harms, such as the 2008 economic crisis, on the rest of society—has enabled the finance industry to grow in size and profitability and has increased its opportunities to exploit everyone else.

A legal provision enacted in 2003 prohibited the government from negotiating drug prices for Medicare—a gift of some $50 billion a year or more to the pharmaceutical industry. Special favors, such as extractive industries’ obtaining public resources such as oil a t below fair-market value or banks’ getting funds from the Federal Reserve at near-zero interest rates (which they relend at high interest rates), also amount to rent extraction.

Further exacerbating inequality is favorable tax treatment for the rich. In the U.S., those at the top pay a smaller fraction of their income in taxes than those who are much poorer.

Historically, the more conservative politicians of either party have favored the rich over the poor.

It’s not that conservatives are more or less honest than progressives. It’s just that the political leanings of progressives, especially at the national level, are more related to compassion for the poor. The vast majority of social programs have been promoted by progressive leaning politicians of either party.

The article concludes with suggested changes:

There is no magic bullet to remedy a problem as deep-rooted as America’s inequality.

Its origins are largely political, so it is hard to imagine meaningful change without a concerted effort to take money out of politics—through, for instance, campaign finance reform.

Blocking the revolving doors by which regulators and other government officials come from and return to the same industries they regulate and work with is also essential.

Beyond that, we need more progressive taxation and high-quality federally funded public education, including affordable access to universities for all, no ruinous loans required.

We need modern competition laws to deal with the problems posed by 21st-century market power and stronger enforcement of the laws we do have.

We need labor laws that protect workers and their rights to unionize.

We need corporate governance laws that curb exorbitant salaries bestowed on chief executives, and we need stronger financial regulations that will prevent banks from engaging in the exploitative practices that have become their hallmark.

We need better enforcement of antidiscrimination laws: it is unconscionable that women and minorities get paid a mere fraction of what their white male counterparts receive.

We also need more sensible inheritance laws that will reduce the intergenerational transmission of advantage and disadvantage.

We need to strengthen and reform retirement programs, which have put an increasing burden of risk management on workers.

Our mortgage system was our Achilles’ heel, and we have not really fixed it. With such a large fraction of Americans living in cities, we have to have urban housing policies that ensure affordable housing

All of the above suggestions refer to laws, but the wealthy pay to elect representatives who vote to widen the Gap.

While Gap-narrowing efforts provide money and jobs to the less affluent, the rich repeatedly use their political power to pass laws that widen the Gap.

From, “Voting in Early America,” we find:

At its birth, the United States was not a democratic nation—far from it. The very word “democracy” had pejorative overtones, summoning up images of disorder, government by the unfit, even mob rule.

In practice, moreover, relatively few of the nation’s inhabitants were able to participate in elections: among the excluded were most African Americans, Native Americans, women, men who had not attained their majority, and white males who did not own land.

That was regressive voting, the belief that the rich were more capable of intelligent voting — a belief endlessly fostered by the rich. Elements of that belief remain even today in some states’ restrictive voter identification laws. 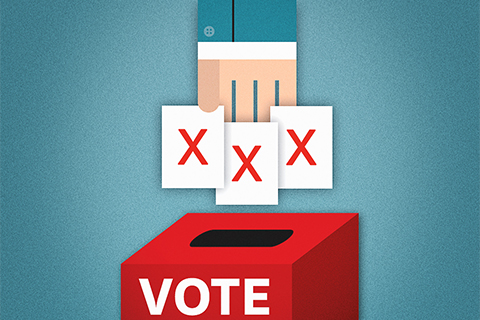 Though there are far more poor than rich, who are eligible to vote, one might think voting already is progressive.

But with gerrymandering, polling-place restrictions, threats, voter disenfranchisement, election chicanery, the fundamental belief that “my vote doesn’t count,” and wealth-funded propaganda, the poor too often, are not able to elect progressive representation.

Thus, we might consider Progressive Voting, wherein a less affluent (based on net worth) voter has more votes than does a rich voter.

Just as an example:

No doubt, there would be complications. Measuring one’s wealth, for instance, would require definitions and appraisals. But, we already do that in our current income tax and poverty-reduction programs.

Great Britain already does it. Great Britain’s Office for National Statistics published “Measuring Wealth on an Individual Level,” describing their method for determining each person’s wealth:

The main results from the Wealth and Assets Survey (WAS) are published in the series Wealth in Great Britain. To date total wealth has only been published at a household level.

This article describes the methodology we have recently adopted to provide estimates of total wealth for individuals living in private households in Great Britain.

Wealth, as measured by WAS, can be split into four categories:

Because of Gap Psychology, the Gap between the rich and the rest is wide, widening, and a direct threat to democracy and people’s lives.

Progressive programs to narrow the Gap, inevitably have been compromised by the rich, because these programs are not supported by ongoing political power.

The rich use their money to fund political power. The not-rich can use votes, particularly with a wealth-based Progressive Voting program, to maintain and strengthen Gap-narrowing efforts.