In short, even if all federal tax collections were $0, the federal government could continue paying its bills, forever.

Yet the AARP, repeatedly spreads the false idea that federal finances are like personal finances and so, Social Security can run short of dollars.

Here are excerpts from their latest “informational article” with regard to Social Security:

1. Social Security is not going bankrupt

At the moment, you could say the opposite; the Social Security trust funds are near an all-time high. “The program really is in good shape right now,” says David Certner, AARP’s legislative policy director. “But we know it has a long-term financial challenge.”

Here’s why: For decades, Social Security collected more money than it paid out in benefits. The surplus money collected from payroll taxes each year got invested in Treasury securities; today, the trust fund reserves are worth about $2.89 trillion.

But as the birth rate has fallen and more boomers retire, the ratio of workers to Social Security recipients is changing. This year is a tipping point: The program will need to dip into its reserves to pay full benefits from this point forward, absent any change to the program.

It’s now forecast that the trust fund reserves could be exhausted in 2034. “The longer we wait to fix Social Security funding, the more the cost will be paid by the younger generations, either on the tax side or the benefits side,” says Kathleen Romig, a Social Security analyst at the nonpartisan Center on Budget and Policy Priorities.

The above is the classic “Social Security finances are like your finances” myth. But, the federal government does not pay its bills out of “trust funds” as the term ordinarily is used:

From the Bureau of the Fiscal Service, U.S. Department of the Treasury: The Federal Government uses the term “trust fund” differently than the way in which it is commonly used.

In common usage, the term is used to refer to a private fund that has a beneficiary who owns the trust’s income and may also own the trust’s assets.

A custodian or trustee manages the assets on behalf of the beneficiary according to the terms of the trust agreement, as established by a trustor.

In contrast, the Federal Government owns and manages the assets and the earnings of most Federal trust funds and can unilaterally change the law to raise or lower future trust fund collections and payments or change the purpose for which the collections are used.

Although AARP speaks about the Social Security “trust fund” having a “financial challenge” and reserves “could be exhausted,” the truth is that the federal government has 100% control over the “fund.”

It has the unlimited power to add dollars, deduct dollars, or do anything else it wishes. It could eliminate the “trust fund” and the FICA tax completely, and still continue to pay Social Security benefits.

But given the deep political divides on Capitol Hill, it’s unlikely that Congress will make any effort to reform Social Security until there’s the possibility of bipartisan support.

There are concerns that the tax-cut legislation passed in late 2017 could lead some lawmakers to look for places where they might cut spending. “The stage has been set by the tax bill to take another run at Social Security, Medicare and Medicaid,” says Max Richtman, CEO of the National Committee to Preserve Social Security and Medicare.

Here, the myth is that taxes, especially FICA, pay for Social Security benefits. Though state and local taxes do fund state and local spending, federal taxes pay for nothing.

In fact, federal taxes are destroyed upon receipt at the U.S. Treasury. and all payments are made with new dollars created ad hoc.

3. Some ideas to reform funding are starting to take shape

One proposal is to either raise or eliminate the wage cap on how much income is subject to the Social Security payroll tax. In 2019, that cap will be $132,900, which means that any amount a worker earns beyond that is not taxed.

Remove that cap, and higher-income earners would contribute far more to the system.

Other options lawmakers might consider include either raising the percentage rate of the payroll tax or raising the age for full retirement benefits.

All of the above options are completely unnecessary. None of them would add even one cent to the federal government’s ability to fund Social Security benefits.

4. Lawmakers do not raid the trust fund

Another common myth about Social Security is that Congress and the president use trust fund assets to pay for other federal expenses, such as education, defense or economic programs.

That’s not accurate. The money remaining after the Social Security Administration (SSA) has paid benefits and other expenses is invested directly into U.S. Treasury securities.

The government can use the money from those securities, but it has to pay the money back with interest.

None of this affects, even to the slightest, the federal government’s ability to fund Social Security benefits.

Then, we are treated to the following graph, which would apply to a personal trust fund, but is entirely fictional when describing federal finances. 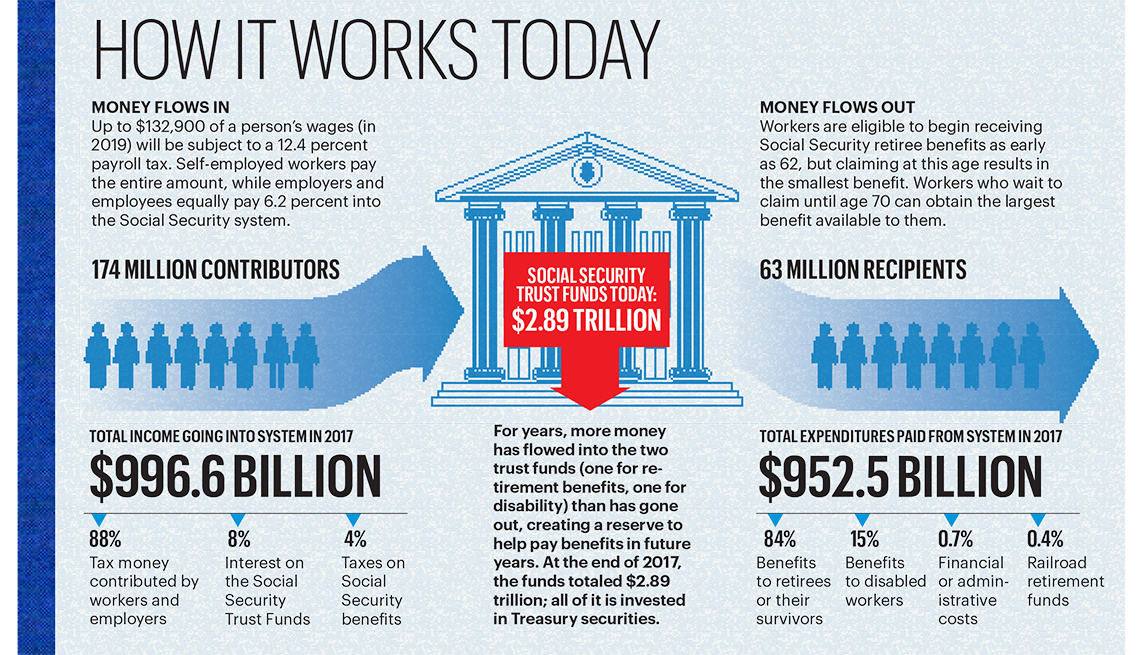 The dollars “flowing in” are tax dollars destroyed upon receipt. The dollars flowing out are brand, new dollars, created ad hoc by the government. There is no connection between what “flows in” and what “flows out.”

The remainder of the “Twelve things to know” deal with specific rules, not the health of the “trust fund.”

In Summary, Social Security is a federal agency. Because the U.S. government is Monetarily Sovereign, and so cannot run short of its own sovereign currency, the U.S. dollar, no agency of the federal government can run short of dollars unless Congress and the President will it to.

None of these acts will improve Social Security’s solvency, which is infinite .

Because of Gap Psychology. You can read more about that, here.