Warning: This is going to be dead simple — 2nd grade, child’s picture-book simple.

Why do businesses spend precious dollars — billions, in fact — on Advertising, Sales, and Research & Development?

In short, businesses rely on customers. Gaining and serving customers is how businesses profit and grow. That’s Business 101.

So, if the U.S. government wants to help America’s business profit and grow what should it do?

Yes, the upper 1% buy things. Like the 99%, they buy food, clothing, and shelter. They also buy diamonds, yachts, and private airplanes.

But the purchases by the richest 1% add up to only a minuscule fraction of what the 99% spend.  The 99% are the primary customers of America’s business.

The best way to help America’s business grow is to help customers of American business buy.

The most common measure of our economy is Gross Domestic Product (GDP). The formula for GDP is:

In short, U.S. GDP measures the spending on American-produced products and services. And again, who does the vast majority of spending in America? The lower 99% income groups. They are the primary customers for America’s business. 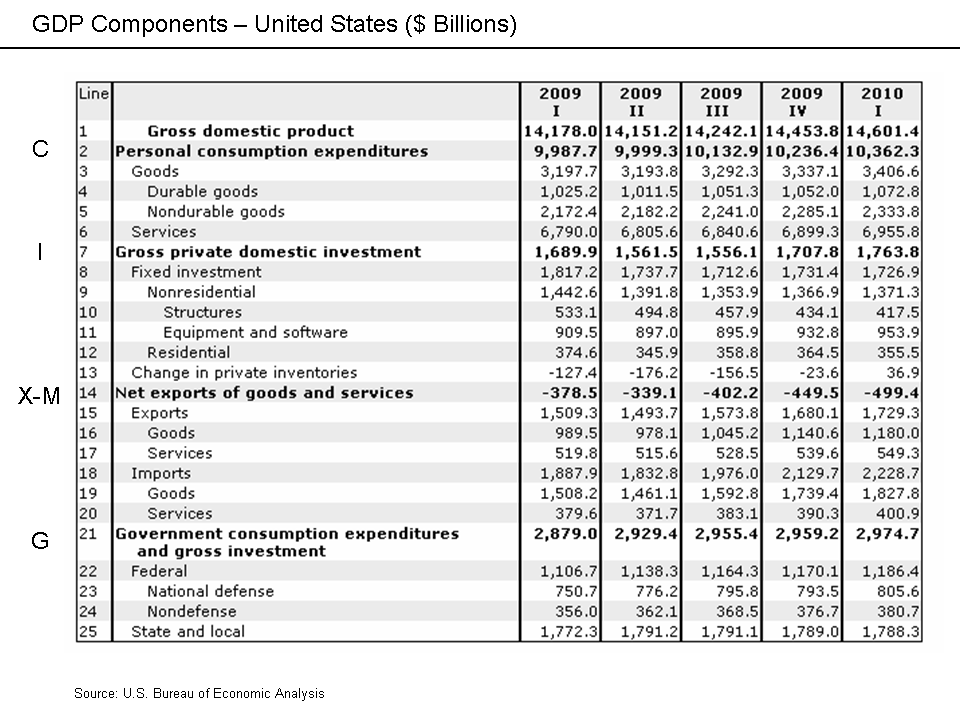 How can the federal government help the lower 99% increase their spending?

The federal government can help the lower 99% increase their spending by helping them to have more spending money.

This is known as: Trickle-up Economics

Give the 99% a billion dollars and they will buy goods and services, thus stimulating the entire economy. They will stimulate America’s business.

But, give the richest 1% a billion dollars, and they will buy stock, increasing the prices of stocks and their own wealth, all to distance themselves from the 99%.

Robert Bradway, chief executive of Amgen Inc., said in an Oct. 25 earnings call that the company has been “actively returning capital in the form of growing dividend and buyback and I’d expect us to continue that.”

“We’ll be able to get much more aggressive on the share buyback” after a tax cut, Kramer said in a Nov. 16 interview.

The biggest moral problem facing the world is the wide and widening Gap between the rich and the rest. Enriching the 99% helps solve that problem.

And the biggest economic problem facing the world also is the wide and widening Gap between the rich and the rest. Enriching the 99% helps solve that problem, too.

The moral and the economic problems can be addressed by providing the 99% with more money — something governments are exquisitely designed to do.

Governments can budget spending that enriches the 99% and also can pass laws that protect the 99%. This too, is Trickle-up Economics.

There are those among the rich, who advocate “trickle-down economics — the notion that if the government supports the rich, or supports business directly, then increased spending by the rich and business will “trickle down” to the rest of America.

It is utter nonsense. It is a lie meant to justify enriching the rich and widening the Gap between the rich and the rest.

When the rich and businesses spend, it is to benefit themselves. When they hire, they pay the lowest wages possible and they hire the least number of people they can.

The rich and businesses actually do their best to avoid trickle-down effects.

The rich do not care whether the 99% have adequate food, clothing, housing, education, etc. Obviously, there are exceptions, but the rich as a group, care only that the 99% serve and stay distant (See: Gap Psychology.)

The Ten Steps to Prosperity (below) are based on Trickle-up Economics. They are designed to encourage business customers to buy goods and services. They do for all businesses what Marketing and R&D do for individual businesses.

Trickle-up Economics grows the economy by creating a solid base of newly enriched customers. Rather than rewarding the rich and their businesses for doing nothing, the Ten Steps rewards businesses by doing exactly what businesses pay Marketing and R&D to do: Attract customers’ dollars.

Talk to your federal Senators and Representatives, and demand Trickle-up Economics — aid to the 99% who are the customers of business —  for the sake of yourself, your family and friends, and for America.

4 thoughts on “Why Trickle-up Economics?”