So, for instance, if your family and friends were bigots — — i.e. intolerant of people because of their race, religion, or sexual orientation — and your schools said nothing about bigotry, you probably would have become a bigot.

Why would your schools say nothing? Perhaps because of laws that prevented them from teaching you right from wrong, for fear you would find such teaching “uncomfortable.”

Although you, like most people, probably harbor some forms of bigotry in your heart, you probably also agree that bigotry, in general, is a sin. How do we solve that dichotomy and break the historical chain?

I was reminded of that question when some years ago, on a visit to Germany, I toured the Dachau concentration camp.

Dachau’s commandant, Theodor Eicke, introduced a system of regulations which inflicted brutal punishments on prisoners for the slightest offenses, while scientists there conducted cruel experiments. 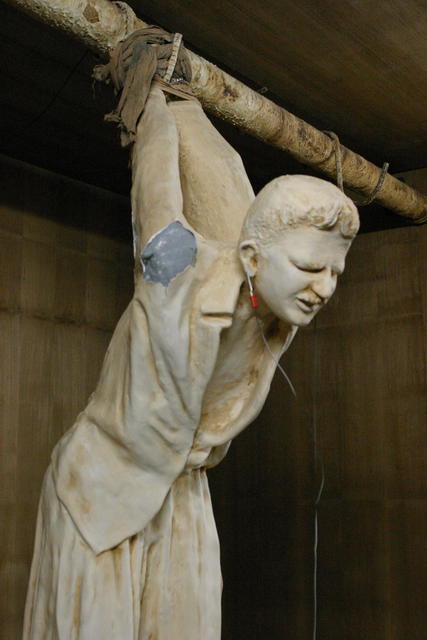 Prisoners were subjected to injections of malaria and tuberculosis, and the untold thousands that died from hard labor or torture were routinely burned in the on-site crematorium.

As Allied units approached, at least 25,000 prisoners from the Dachau camp system were force-marched south.

During these death marches, the Germans shot anyone who could no longer continue; many also died of starvation, hypothermia, or exhaustion.

I was able to tour the camp because the German government neither hid nor denied the existence of the horrors committed there. In fact, they use the camp as a reminder of the past, to help prevent a repeat.

A movie describing in detail, the horrors of the camp, is shown to daily busloads of German school children as a right-vs.-wrong lesson.

The German people, but for a small minority, do not celebrate the misdeeds of Naziism. There are no statues of Hitler in Germany. The Holocaust is revealed and decried.

The Germans do not fear admitting this dark period of their history. In fact, they actively teach it.

I think of that approach to the shameful parts of Germany’s heritage when I compare it to the American — or rather, the right-wing — approach to the horrors of our past and even of our present.

Slavery was an abomination that was celebrated by statues which, at long last, were pulled down despite claims of “Southern heritage.”

And today, in America, “well-meaning, good citizens,” protest against teaching the parts of our past that shame us. Their stated concern is that such reminders and revelations would make their children “uncomfortable.”

Today, our black families continue to undergo hardship. No, it isn’t of Holocaust levels, but still is terribly destructive and wholly unnecessary in our wealthy nation.

GOP advocated denial is the worst approach because it teaches no lessons. It condemns us to repeat the sins of the past.

“Those who cannot remember the past are condemned to repeat it.”
George Santayana, The Life of Reason, 1905. From the series Great Ideas of Western Man.

We neither can, nor should try, to erase the blemishes of our past. Nor should anyone blame our children for our sins or for the sins of those who came before us. Leveling such blame would, in itself, be bigotry.

The purpose of teaching history is not to lay blame or to create guilt, but to help us know our own successes and foibles, and the circumstances that can move a nation to bigotry and hatred.

We are not pure. No nation is. Pretending purity is blindness and naivete. Let us be honest with ourselves. To some degree, we all receive mistreatment at times, but in America people of color have been, and still are, disproportionately mistreated.

We allow the teaching of the Holocaust, and even have museums dedicated to that education. Few object, because it was the Germans, and to a degree, the Poles, Austrians, French and others who committed those crimes.

But the teaching of racism in America is an anathema to some Americans, because it is we, or more correctly, some of us, who are the perpetrators. And to hide that historical fact, we countenance angry denial.

This brings us to something called “Critical Race Theory,” perhaps the most reviled yet least understood and least taught academic subject in education.

Critical race theory (CRT) is an academic concept that is more than 40 years old. The core idea is that race is a social construct, and that racism is not merely the product of individual bias or prejudice, but also something embedded in legal systems and policies.

One example: In the 1930s, government officials literally drew lines around areas deemed poor financial risks, often explicitly due to the racial composition of inhabitants. Banks subsequently refused to offer mortgages to Black people in those areas.

Scholars who study critical race theory in education look at how policies and practices in K-12 education contribute to persistent racial inequalities in education, and advocate for ways to change them.

And that requires study.

Sadly, there are those who deny any study is necessary, deny such inequalities exist to be solved, and claim any such equalities are the fault of the Black students — a “blame-the-victim” rationalization.

The Catholic confessional begins, “Forgive me father for I have sinned.” The confession of sin is the first necessary step for absolution. Without realization and confession, the sin compounds.

The Germans seem to have understood that the denial of sin is in itself a sin.

“Forgive America, father, for we have sinned.” Those are the words of the truly moral, truly righteous.

For you who are religious, here is are reminders:

John 1:9 If we confess our sins, he is faithful and just to forgive us our sins and to cleanse us from all unrighteousness.
James 5:16 Therefore, confess your sins to one another and pray for one another, that you may be healed.
Proverbs 28:13 Whoever conceals his transgressions will not prosper, but he who confesses and forsakes them will obtain mercy.
Psalm 32:5 I acknowledged my sin to you, and I did not cover my iniquity; I said, “I will confess my transgressions to the Lord,” and you forgave the iniquity of my sin.
Romans 3:23 For all have sinned and fall short of the glory of God
James 4:17 So whoever knows the right thing to do and fails to do it, for him it is sin.

Perhaps you are one of those rare souls who has not sinned and has not felt bigotry in your heart. But to deny, or even to countenance the sins of others against strangers is in itself a sin.

Discomfort is not an excuse for denial.

Children must be taught about the existence of sin so they can recognize it and learn to avoid it. Without this teaching, the children can be sucked into sin by evil persons.

We are not born bigots. We learn to be bigots, unless we first learn about the evils of bigotry.

The people who object to the teaching of racism in America often blame their children’s sensitivity. But this is a false excuse. The real reason is, they are ashamed of our past, and want to bury it.

But the past has become the present, and it cannot be buried so long as it still lives. The only way to end the shame is to recognize it and to speak against it, else it will not only continue but multiply.

Perhaps, the real problem lies not in the reluctance to admit that bigotry exists but rather in the fear of the cures.

“Affirmative action” often has involved establishing racial quotas or preferences to “even out” representation in school admissions or job hiring. The problem here is that it invariably requires the less qualified to take precedence over the more qualified, and always will be seen as unfair.

Affirmative action” also stigmatizes the very people it is supposed to help — the “You got in only because you are black” appearance, which further adds to the bigotry rather than reducing it.

Once we recognize the bigotry problem itself, and once we determine to solve it, the solution lies not at the top but at its foundation: Money and poverty, i.e. the income/wealth/power Gap at the bottom of the financial scale.

These all lead to poorer primary-school academic results which, in turn, lead to less-educated older students and less qualified job- and college applicants.

Rather, the solution is to lift the lower levels far enough above subsistence so that the problems of poorer primary schools, more crime, less family stability, poorer housing, poorer nutrition, and desperation culture cease to impact even the least fortunate among us.

This would be a “rising tide” approach that lifts all boats. Examples can be found in the “Ten Steps to Prosperity” (below). For example:

Offering the same money to everyone, regardless of current income or wealth, will not affect the lifestyles of the rich, but can lift the poor to levels where school and job achievements are seen as being in reach.

It will not evoke cries of “unfairness” and “discomfort” that currently plague the accurate teaching of America’s history.

[Why would any sane person take dollars from the economy and give them to a federal government that has the infinite ability to create dollars?]