We are not born with governments and businesses. We create them. But why?

Why do people voluntarily allow themselves to be ruled by others? You might believe it is not necessarily voluntary, particularly in the case of dictatorial governments.

Sometimes this happens. Sometimes the governed rise up and free themselves of dictators. And when they do, what happens?

They form another government. 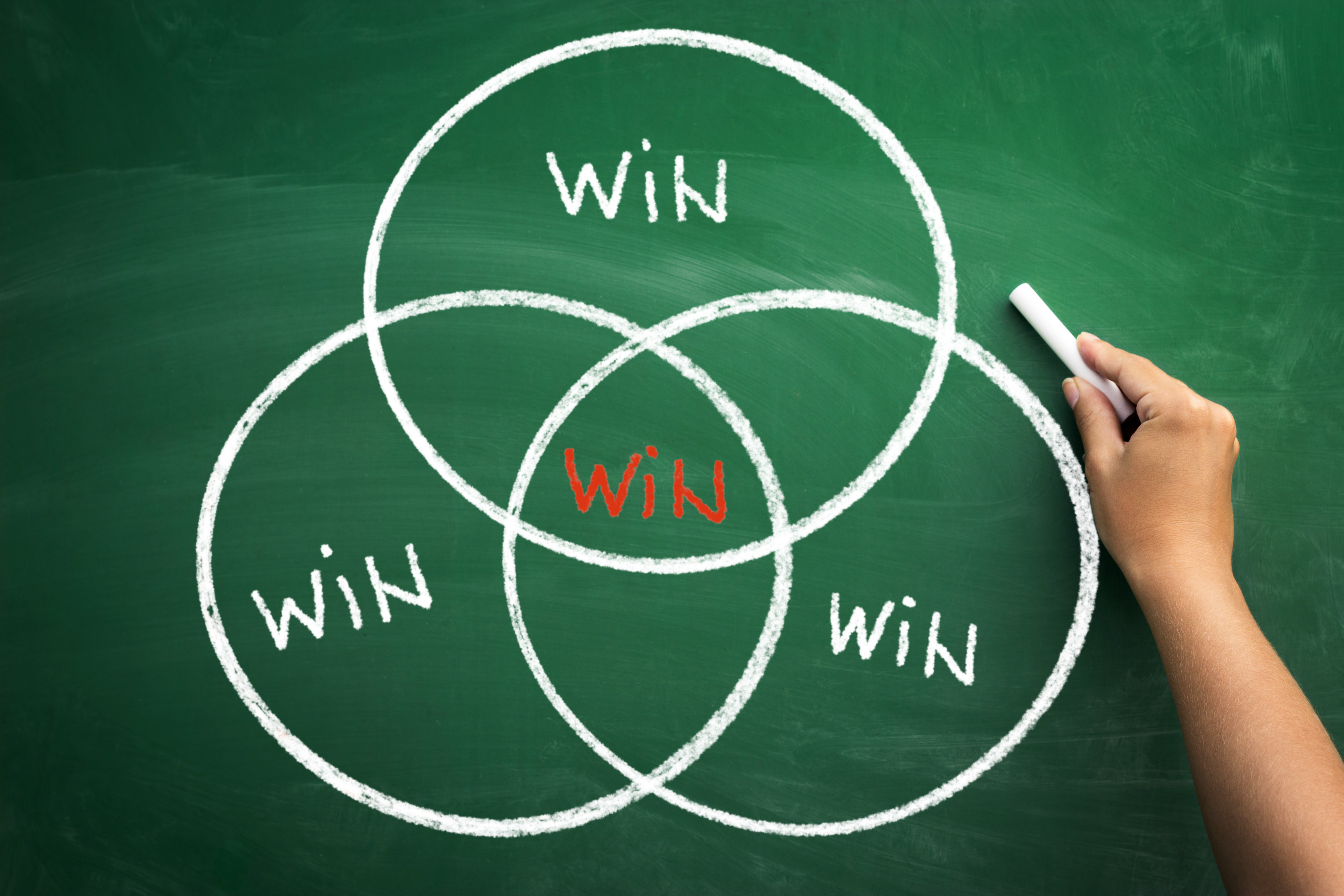 So what is the purpose of this institution that virtually all humans and even some animals have adopted.?

It has persisted for millennia, so it clearly has an evolutionary advantage.

While one can list several specific purposes, there is one general, overall purpose of government:

The purpose of government is to improve the lives of the people.

Government is a form of mandated cooperation. Having a government says two things:

So we give up our individual freedoms and rights to reap the benefits of cooperation and leadership. In that sense, businesses are very much like governments.

We form businesses because specialization is more efficient than the “jack-of-all-trades” who most often is “master-of-none.”

To accomplish this efficiency, businesses are formed as legal mini-governments, complete with rulers and the ruled.

Governments tell people what to do and what not to do, and the people allow this because it improves their lives.

Business owners and managers tell their people what to do and what not to do, and the people allow this, because it improves their lives.

The purpose of business is to improve the lives of the people.

The goal of government and business is to improve the lives of the leaders.

The leaders accomplish this goal via several methods.

In analyzing government and business, we not only must consider purpose and goal but also, method. Governments essentially balance two methods: Providing benefits and applying force.

Government force — laws, police, military — does the same. Either way discourages action against the leaders.

Businesses also balance two methods: Providing benefits and force. The benefits are promotion, salary, and perks, while the force is demotion and firing.

Again, business and government use similar methods — the carrot and the stick — to reach their goals.

Keep the purpose, the goals, and the methods of business and government in mind as we discuss the following articles.

Pay a Living Wage or ‘Flip Your Own Damn Burgers’: Progressives Blast Right-Wing Narrative on Jobs Posted on May 8, 2021 by Yves Smith

Yves here. Glad to see someone is calling out the Republican “You need to keep them hungry so they’ll turn up” approach to labor management.

Corporate profit share of GDP has been record highs for years, which means nearly two times the level Warren Buffett deemed to be unsustainably high in the early 2000s.

Time for corporate owners to pay a decent wage.

“No. We don’t need to end [the additional] $300 a week in emergency unemployment benefits that workers desperately need,” Sen. Bernie Sanders (I-Vt.) said in response to the grumbles of the nation’s largest business lobbying group.

“We need to end starvation wages in America.”

According to the Chamber’s analysis, the extra $300 unemployment insurance (UI) benefit results in roughly one in four recipients taking home more pay than they earned working.

In response to that claim, Sanders’ staff director Warren Gunnels said: “If one in four recipients are making more off unemployment than they did working, that’s not an indictment of $300 a week in UI benefits. It’s an indictment of corporations paying starvation wages.”

The problem: Government believes that the more benefits government gives to workers, the more likely the government’s goal — improving the lives of the political leaders by acquiring votes — will be reached.

Business believes that keeping salaries low will improve business’s goal of improving the lives of business leaders by increasing profits.

Today, Government benefits to the people are high enough that going to work provides little marginal benefit for many people.

The Republican proposed method is for the government to stop paying benefits, so that workers will be starved back to work, and business profits will keep increasing.

The Democratic proposed method is for businesses to pay more — enough to tempt workers to forego government benefits, but this may reduce profits.

While both goals are different, and the methods may seem incompatible, the solution is mind-numbingly simple: Do both.

This would come under the heading:

Medicare for All, Social Security for All, Free College for All, etc.

A wage of $300 per week is at poverty levels. It is a starvation wage. It is an “abandon all hope” wage.

How a multi-billionaire, a person whose wealth measures up to $170 billion could countenance such a wage, is beyond cruel.

Do these people lack all sense of sympathy and empathy? Are they made of compassionless stone?

Well, yes. Compassion comes from Latin, and means “co-suffering,” as in “I feel your pain.” But how many of us really do feel someone else’s pain?

Keep in mind, the goal of business is to improve the lives of the leaders, and the leaders are certain that keeping costs down, which leads to keeping salaries down, will improve profits and thereby improve their lives.

Other progressives like former labor secretary Robert Reich and Rep. Alexandria Ocasio-Cortez (D-N.Y.) also chimed in. “We do not have a shortage of willing workers in this country,” Morris Pearl of the Patriotic Millionaires said in a Friday afternoon statement responding to the Chamber. “We have a shortage of employers who are willing to pay workers enough to live.”

“Claiming that today’s disappointing jobs report is a result of expanded unemployment insurance is nothing more than a cruel tactic to pressure the administration into helping companies that they represent to continue to underpay and exploit their workforce,” Pearl continued.

“Our leaders are supposed to be helping to increase wages for low paid workers, not helping employers to keep wages down.”

“Instead of blaming struggling workers,” Pearl continued, “large corporations that do not pay their employees a liveable wage… should take this moment to self-reflect.

Maybe—just maybe—paying their workers more than starvation wages would incentivize workers to reenter the workforce.”

Yes, this is all true, but it ignores the true goal of business: Profits that enrich the leaders.

One might argue that paying workers more will make the workers bigger consumers who in buying more will enrich companies, but that too ignores reality.

If Company “A” pays its workers more, those workers may spend more, but not necessarily with Company “A.”

If Ford raises wages, nothing says those newly enriched workers will, out of the goodness of their hearts, buy Fords.

The public has as little compassion as do the business executives. The people who formerly were myriad small-business customers, but now are Amazon customers, have proved that.

Loyalty is something honored more in the breach.

Writing for Jacobin earlier this week, Sandy Barnard noted that another overlooked factor is the increased morbidity rates among food and agricultural workers, which increased more than any other occupation during the Covid-19 pandemic.

Is big agriculture supposed to have such guilt that workers immediately are given raises? Dream on.

“Living, breathing people… have decided they do not want to risk their lives for $7.25 per hour and no health benefits,” Barnard wrote.

Rep. Ilhan Omar (D-Minn.) responded to the Chamber’s call for an end to enhanced unemployment benefits by arguing that “the interests of big business are at war with the interests of the working class.”

And that is the fundamental problem. It is a war, with one side winning and the other sides losing.

The solution is for all sides — government, business, and the populace — to win.

Government can win — win votes, that is — by providing benefits.

Business can win by paying enough to attract workers — while remaining profitable. The populace can win by receiving benefits from both sides, from government and from business.

There absolutely will be no long-term solutions that involve either business, government, or the people losing.

The only intelligent solution is for all sides to get what they want, or at least to get enough of what they want. See the Ten Steps to Prosperity, below.