Imagine this: You own a large fresh-water lake and all the land around the lake. You live in a house on the shore, and you alone freely can draw endless fresh water from the lake to meet all your needs.

Your children, who do not live on the lake, grow crops and do some manufacturing. They sell their crops and their manufactured goods to your neighbors, and in payment they receive . . .

That’s right. In return for your children’s labor and expenses, they receive water, which you can obtain from your own lake, and simply give to your children, at virtually no cost.

Crazy, isn’t it? But wait, it gets crazier.

Since you have unlimited water, and your neighbors need water, you are able to buy food, clothing and manufactured goods from them, and pay your neighbors in the endless water you can draw from your lake.

One day, you become angry at one of your neighbors for not buying enough of your children’s crops and manufactured goods. You want him to buy more from them and to give your children even more water — the same water you could give them at no cost. 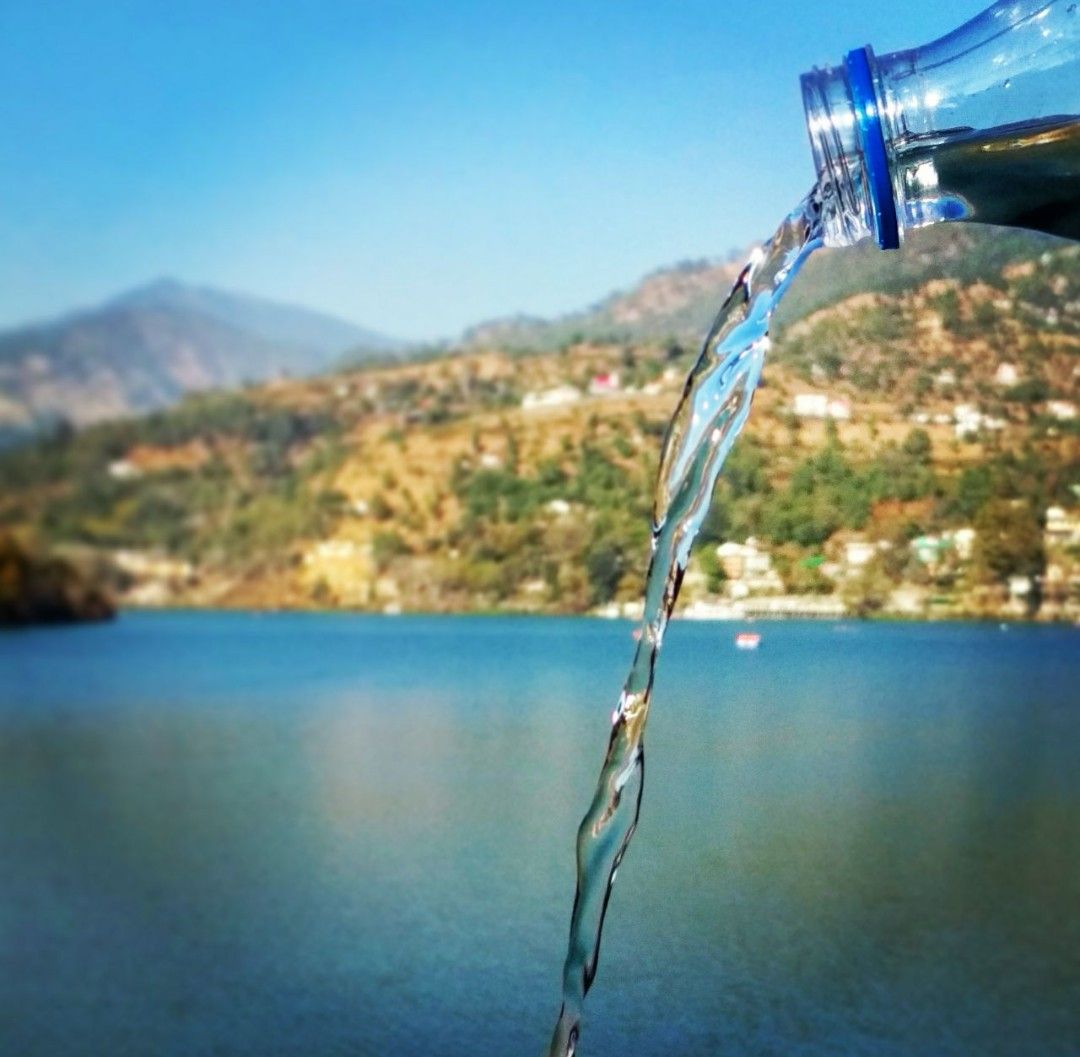 So to punish your neighbor for not buying enough of your children’s labor, and sending them more water, you take some of the water he gives your children, and you pour it back into the lake!

You may think this story is insanity, but what I just have described is the U.S. trade war with China.

The U.S. government, unlike state and local governments, unlike the euro nations, and unlike you and me, is Monetarily Sovereign.

That means the U.S. government has the unlimited ability to create infinite U.S. dollars at the touch of a computer key.

In the above parable, U.S. dollars correspond to the unlimited water you freely can draw from your lake.

China pays for our exports with U.S. dollars, which to the U.S. government are nothing more than water. But the Trump administration is angry at China for not buying enough of our products and sending us more dollars (water).

So the Trump administration decides to “punish” China by levying an import duty on Chinese goods, which is exactly like pouring our children’s water back into your lake.

For every export, there must be an import. When the U.S. exports goods and services, it imports the dollars that pay for the export.

The U.S. does not need to import dollars.

Remember the above parable as you read excerpts from a story that appeared in THE WEEK Magazine:

China is getting Trumpy
By Jeff Spross

In retaliation, he’s used tariffs to cut down on the goods Americans import from China — and, by extension, bulk up the “Made in America” goods they buy.

Translation: Trump is angry at the Chinese for not buying enough of your children’s products (in exchange for water).

So he takes some of your children’s dollars (water) in tariffs (pours it back into your lake).

Meanwhile, Trump’s critics paint this as an absurd and destructive quest; they assert that our economic entanglement with China is good for the United States.

It’s good for the United States because we receive valuable goods, made by the sweat of Chinese labor and valuable assets, and all we give them is the dollars that cost us nothing to produce.

Ironically enough, unlike Trump’s U.S. critics and despite what it says abroad, China’s government has its own downright Trumpian plan to get Chinese consumers to buy more Chinese-made products.

Quite literally, the plan is called “Made in China 2025.” The Chinese government — whose economic policy is a weird hybrid of market liberalization and communist-style state ownership and central planning — announced the plan back in 2015.

China wants to consolidate those supply chains within its own borders, so its consumers can buy more of those types of goods from domestic producers. Sound familiar?

Like the U.S. government, China’s government is Monetarily Sovereign. It has the unlimited ability to create the Chinese renminbi. It never can run short of renminbi.

It can pay millions of Chinese workers billions of renminbi to manufacture everything locally. It has the financial ability to consolidate all supply chains locally.

And/or, it can use the foreign exchange markets to obtain unlimited dollars, and buy whatever it wants to buy from the U.S.

China is caught in the “middle income trap.”

Most of what it exports to the world is low-cost manufactured goods — think clothes, shoes, or consumer electronics — which are low cost because the workers who make them aren’t paid a lot.

Meanwhile, it imports a lot of  high-tech products, which are much more expensive.

The word “deficit” and the word “debt,” are the most misunderstood words in all of economics. Both have pejorative implications.

Consider “deficit.” No one likes to run a deficit. Everyone prefers a surplus. But, a federal deficit is an economic surplus. Money flows from the federal government to the economy.

Every day, you run a “deficit” with your grocer, your neighborhood restaurant, your pharmacist, your clothing store, etc. What if you could pay for all these “deficits” with the free water from your lake? Are you bothered by those deficits?

For a Monetarily Sovereign entity, there is absolutely nothing wrong with “perpetual trade deficits.” In fact, they are beneficial.

You receive valuable goods and services, created by the labor and assets of other nations, and you pay with a commodity that has no cost to you: Your own sovereign currency.

That trap drives them into exchange rate crises every so often.

For a Monetarily Sovereign nation,  there are no “exchange rate crises. They have absolute control over every facet of their currency, including the value of that currency. They are sovereign over the currency.

China’s largely managed to run a trade surplus with the rest of the world despite all this, albeit with the occasional dip into trade deficit.

Which is a testament to the intelligence and aggressiveness of Beijing’s macroeconomic and trade strategies.

Translation: China largely managed to use its valuable labor and resources to obtain renminbi, which it could have created without using any of its labor or resources.

That is no testament to “intelligence” and aggressiveness.”

But now the Chinese government would like to get the country out of the middle-income trap entirely.

They are in a trap created by ignorance, not by reality. Like the U.S., they easily could support “perpetual trade deficits,” i.e. buy endless goods in exchange for their endless sovereign currency.

Ironically, here in America, the Made in China 2025 plan isn’t the kind of thing that Trumpian critics of free trade or establishment champions of free trade want to see.

Critics of free trade want America to close its own trade deficit by selling more stuff to China, which is obviously in tension with China’s desire to produce more domestically.

And neither camp likes the idea of China providing more direct subsidies to its domestic companies, or continuing to grab technological know-how and intellectual property from the rest of the world.

The Trump administration actually released a report in 2018 concluding that aspects of Made in China 2025 were “unreasonable and discriminatory.” And other European countries have complained about it as well.

The only people who should complain about China’s “Made in China” efforts are the euro nations — nations like France, Germany, Italy, Portugal, et al, who do not have a sovereign currency.

They use the euro, which is the sovereign currency of the European Union (EU), not of any individual nations.

Euro nations do not have the unlimited ability to produce euros. They can, and often do, run short of euros, and they depend on the “charity” of the EU for survival.

Like you and me, the euro nations are monetarily non-sovereign. They need to export enough goods and services (i.e., import enough euros) to cover their shortfall of euros.

As payback for Trump’s tariffs on Chinese exports, China jacked up tariffs on American exports.

Translation: To punish America, China raised taxes on its own people,the same thing Trump did to Americans to punish China.

Not surprisingly, China’s imports from the U.S. have fallen since 2018.

But China’s imports from the rest of the world fell by a comparable amount over the same period. It’s not that Chinese demand for foreign goods shifted from American producers to other countries — it’s that the demand just fell, period.

China is producing and paying for more goods and services internally, which being Monetarily Sovereign, it can do endlessly — as can America.

Both the European Central Bank and the International Monetary Fund have noted the shift, while France’s central bank came right out and said “the recent trade deceleration is closely linked to the shift of China’s production towards domestic demand.”

Yes, European euro nations should be worried. They cannot control their own finances. They are slaves, not only to the EU, but to the rest of the world, and it all was so predictable.

Because of the Euro, no euro nation can control its own money supply. The Euro is the worst economic idea since the recession-era, Smoot-Hawley Tariff. The economies of European nations are doomed by the euro.” The Meteorology of Economics,” 2005

The austerity and free-market policies of the modern global trade order create a permanent shortfall in global demand, thus driving a race to the bottom as every country tries to outwit its neighbor and grab more of the demand that remains.

Rather than attempt to change that game, both Trump’s and China’s protectionism are just attempts to be the player who comes out on top.

Austerity is merely the attempt by the very rich to widen the income/wealth/power gap and to squeeze more dollars out of the middle and the poor.

No people in human history (other than the rich) have benefited from their nation adopting austerity.

By contrast, protectionism by a Monetarily Sovereign nation can be quite beneficial to that nation’s populace.

6 thoughts on “The trade war of ignorance”