I’m not sure why, psychologically, it’s so satisfying to see someone hoist with their own petard.

The school bully gets bullied. The “A” student braggart is caught cheating. The terrorist gets blown up by the bomb he was making.

Don’t get me wrong. The Washington Post is a great, investigative newspaper.

Without the Washington Post, the NY Times, et al, we wouldn’t have learned half of what we know about the crooked Trump administration; And heaven forbid, that incompetent liar still might be President.

But sadly, WP (unintentionally, I assume) helps promulgate the Big Lie in economics, that federal financing is like your personal financing.

But now, the WP introduces the Big Lie in economics:

Anyone taking an introductory macroeconomics course is quickly introduced to the “guns versus butter” model.

It is a framework for discussing how much can be spent on a nation’s military budget vs. social programs.

There’s a finite amount of money available, and so the concept illustrates the tension between defense spending and civilian spending.

“The U.S. government has a technology called a printing press (or today, its electronic equivalent) that allows it to produce as many U.S. dollars as it wishes at essentially no cost.”

Omar’s tweet is a perfect distillation of this concept, as she questions why money is being spent on defense when it could instead be spent on a single-payer health-care system, popularly known as Medicare-for-all.

Why “instead.” What is the purpose of that word “instead,” when the government can produce as many dollars as it wishes?

We originally thought Omar was proposing to eliminate spending on “guns” to maximize the “butter.” But her spokesman, Jeremy Slevin, says that is not the case.

“The point, which progressives have made repeatedly, is that we prioritize spending on hundreds of military bases, ground wars and weapons contracts instead of basic needs like health care, housing and nutrition,” he said.

There’s that word “instead” again. The Washington Post believes it. Omar believes it. Slevin believes it. They all believe there only is a finite amount of money to spread around, and that is the Big Lie of economics.

Still, this tweet calls for a review of the numbers. It may be news to Omar, but the U.S. government already spends more on health care than on defense.

So what if the government spends more on health care than on defense. What does spending on one have  to do with spending on the other/

Defense outlays in 2021 are expected to be about $733 billion, according to the Congressional Budget Office. Omar’s tweet — $2 billion a day on defense — suggests the annual budget is about $730 billion, so that’s on target.

Assuming no money was spent on defense, that would give you $7.3 trillion in extra cash to spend on a single-payer system for the next 10 years.

No, no, and no. Eliminating money for defense does not give you even one extra dollar to spend on a single-payer system.

The federal government could spend the $2 trillion on defense — or $20 trillion — and still spend as much as it wishes for single-payer health care.

That sounds like a lot of money, but it’s chicken feed compared with what the nation already is projected to spend on health care.

Just in 2028, annual health-care spending is projected to be $6.2 trillion.

Right now, individuals and companies pick up a lot of that tab. A national health-care system would require the federal government to pick up more of the cost.

Wrong, again. If the WP is referring to federal taxes, then none of that money is used to “pick up the tab.”

What “tab” do individuals and companies pick up? If you count the cost of private insurance as part of the tab, that’s a cost individuals pick up.

And if you count the fundamental human and business costs of illness, those are tabs individuals and companies pick up.

But, because federal taxes do not fund federal spending, individuals and companies pay taxes, but those tax dollars do not fund Medicare.

According to the CBO, federal subsidies for health care would increase between $1.5 trillion and $3 trillion a year — far more than any annual savings for eliminating the military. The nation’s national health-care expenditures would increase slightly or decline as much as 10 percent.

(Obviously, one way to increase the size of the pie available for health-care spending is to boost taxes. Nothing in life is ever free, and neither is free health care.)

Once again the Big Lie in economics is presented to you. The WP says nothing is free, but Ben Bernanke says the government can create all the money it wishes “at essentially no cost.”

And Ben is correct.

The WP writer is just quoting the old trope about there not being any such thing as a free lunch, and claiming it’s a fact of economics. But tropes aren’t facts, no matter how clever they may seem.

The Pinocchio Test
Omar appears to have been making a rhetorical point, not a mathematically sound one, so we will leave this unrated.

But in the continuing debate over guns vs. butter, it’s important to remember that butter at the moment has the upper hand.

There needn’t be any debate about guns vs. butter. The federal government easily can pay for both at the touch of a computer key.

I award the Washington Post its own new ranking, the bottomless Pinocchio, for this article and all the others like it. 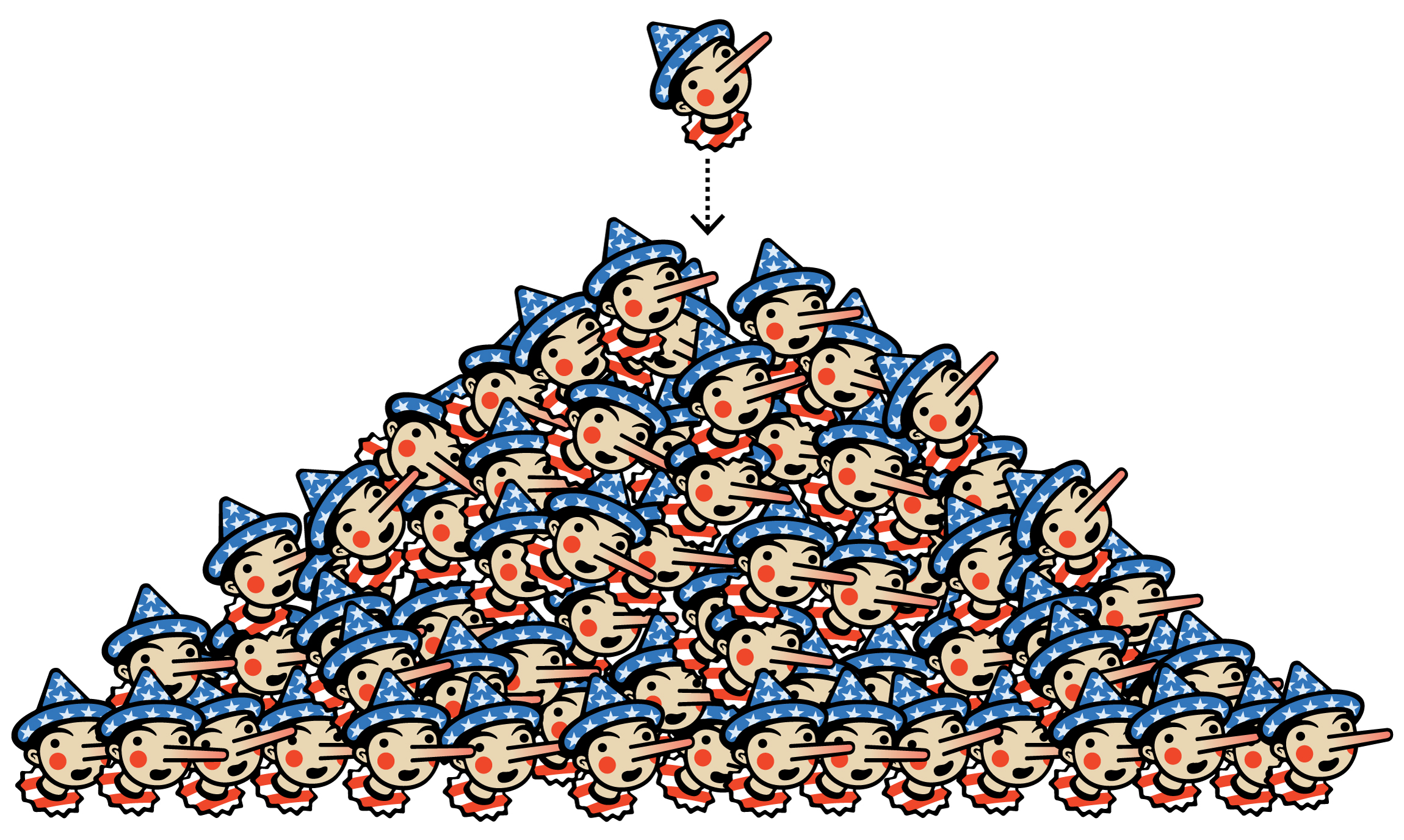 The “Bottomless Pinocchio, the Washington Post’s new ranking for a false claim repeated over and over, again.

2 thoughts on “Pinocchio gets four Pinnochios”