You may believe that the U.S. government is doing everything in its power to prevent recessions and depressions.

If you believe it, you would be wrong.

Consider that you own a small restaurant employing 20 people. Along comes the virus. No one can eat in your restaurant because you don’t have enough room for social distancing, and you don’t have an outdoor space.

So you have to close your doors, and let your employees go. In your little world, that means instant depression.

Now multiply your little business by millions, and you have millions of businesses in America suffering, and that would be a national depression.

Your rich Uncle Sam comes to you and says, “I will give you all the money you need to keep paying your employees (including tips) and yourself the same amount you would have received had you been able to stay open.”

Now suddenly, your little world has no depression at all.

And if your rich Uncle Sam does the same for every business and person in America, suddenly the economy is thriving.

Recessions and depressions are caused by the lack of money; they are cured by infusions of money.

The U.S. federal government has the absolute and unlimited power to provide income to every business and every person in America.

So why doesn’t the government do that, especially now, when so many businesses and people are suffering?

The government already has allocated (though not yet spent all) 3 trillion dollars to stimulate the economy, but that $3 trillion is much too little and far too late.

Since the government has not indicated it will raise taxes, clearly Congress and the President understand the basic truth of federal (Monetarily Sovereign) financing:

The U.S. government never can run short of dollars. It can spend endlessly, even without taxing.

So why do we see Democrats begging for money and Republicans resisting, especially when the coming election will greatly be affected by the health of the economy?

One would think President Trump, especially, would want to stimulate the economy before November, and it would be the Democrats resisting.

So, why do we repeatedly see articles like these:

Democrats seek to increase supplemental funding bill to $450 billion
By Alexander Bolton – 03/22/20
Senate Democrats are calling for a $450 billion emergency spending package to be added to the stimulus bill, nearly twice the amount Republicans have appropriated and nearly ten times what the White House has requested.

House passes Democrats’ $3T coronavirus ‘HEROES’ aid: Stimulus checks, money for states, rent assistance
President Donald Trump called it “DOA,” and Sen. Mitch McConnell said the bill was little more than an unrealistic wish list.
WASHINGTON — The House on Friday narrowly passed a $3 trillion coronavirus relief package crafted by Democrats that would include another round of stimulus payments of up to $1,200 per person.
President Donald Trump this week declared the Democrats’ proposal “DOA.” May 15, 2020, By Rebecca Shabad

Republicans And Democrats Are Trillions Apart On The Next Stimulus Bill
July 10, 2020
House Speaker Nancy Pelosi said the next bill ― which would be Congress’ fifth coronavirus response measure ― needed $1 trillion for state and local funding, $1 trillion for expanded unemployment benefits and direct payments, and “something like that, probably not as much” for COVID-19 testing, contact tracing, and treatment.
A senior GOP aide said Senate Republicans are pushing for $1 trillion overall.

The Republicans, who would benefit in November from any economic stimulus, amazingly reject stimulus bills. What is going on, here?

We easily could write this off as abject stupidity by Trump and his clownish group of sycophants. But it’s even more than that.

The GOP as a party, and Trump as President, are so anti-poor and pro-rich they have a knee-jerk, negative reaction to anything that helps the poor and middle classes. They incorrectly call aid to the non-rich, “socialism.” (Aid to the rich is fine, however.)

The Democrats want funding for state and local governments, and for expanded unemployment, nearly all of which aid the poor and middle classes.

Despite GOP foot-dragging, the $3 trillion stimulus, though much too little, has had some beneficial effect.

The uptick in retail sales demonstrates that a continued recovery is in Congress’s hands.

By Myles Udland, reporter and co-anchor of The Final Round. Follow him at @MylesUdland, Friday, Jul 17
Retail sales are all the way back. 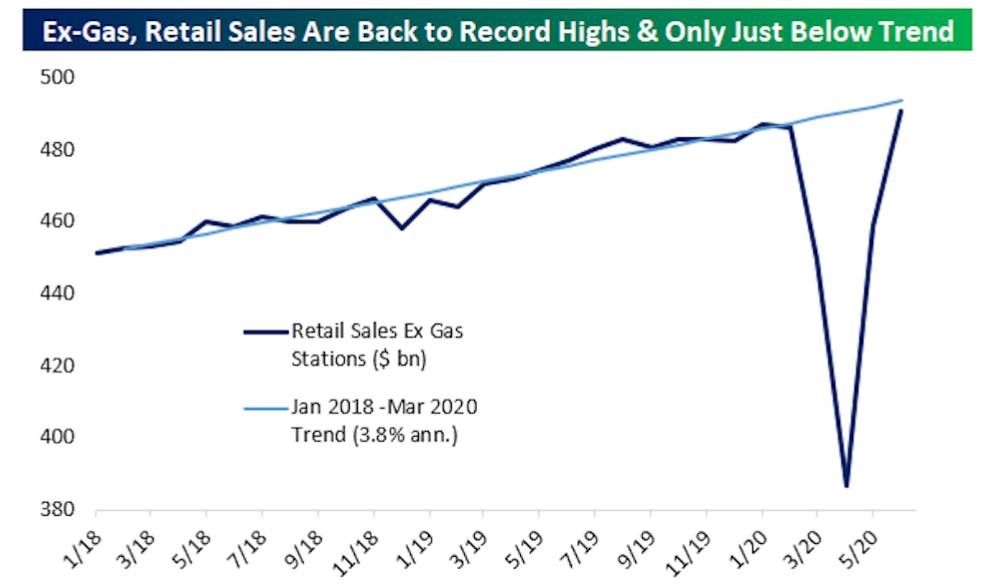 And as the chart from Bespoke Investment Group shows, excluding gas retail sales have come all the way back to pre-pandemic trendline growth.

And this report serves as more evidence that stimulus through the CARES Act sent to consumers has been enough to keep spending afloat and keep the gears economic growth turning.

More importantly, it serves as evidence that:

The economic implications are enormous.

We are left with two false excuses:

The reason “socialism” doesn’t work is because it involves public ownership and control of all means of production.

Despite what you repeatedly are told, mere government spending is not socialism.

False excuse #2: The poor and middle-income groups are fundamentally lazy, and if everything is given to them they won’t work.

First, the poor and middle-income groups are not fundamentally lazy. In fact, on average they work harder than do the rich

Second, the Ten Steps do not propose that “everything” be given to the poor and middle-income people. There are many levels of benefit and luxury above what the Ten Steps provide.

Third, the total of human desires is infinite. Pay for a person’s education, healthcare, housing, and food, and that person still will work to improve his life, further.

This is the lesson of Gap Psychology, the human desire to distance oneself from those below on any socioeconomic measure and to join those above.

For example, people already owning a home and a car, will work to have an even better home and two cars. It is in the nature of people.

The GOP’s, and to a much lesser extent, the Democrat’s reluctance to spend enough to prevent and cure the coming recessions, not only is unnecessary, but cruel and insulting to those who are less wealthy.

‌”Several indicators suggest that May and June were the easy months, and that the resurgence of COVID-19 cases is leading to slower activity gains in July.” JPMorgan estimates that real consumer spending was 7.2% below January’s level in June.

‌As we’ve written in recent weeks, the pending expiration of these benefits is a looming fiscal cliff that could short circuit the still-fragile economic recovery.

Benefits for businesses and consumers should not end nor should they be inhibited. They should be increased, massively, to prevent the human suffering recessions cause.

The sole purpose of a government is to improve and protect the lives of the people, not to force them to dance on the edge of a precipice.

It is imperative that lawmakers continue offering support to consumers facing a historically weak labor market while small businesses continue to buckle under the pressure of the recessionary environment.

‌Nancy Vanden Houten, lead economist at Oxford Economics, said Thursday that this data “[underscores] that layoffs remain widespread. And the risk may be for additional layoffs going forward as some states reimpose more restrictive measures to combat surging Covid-19 cases.”

‌In a separate note on Thursday, Oxford’s chief U.S. economist Greg Daco noted that the firm’s real-time activity tracker has flattened out in recent weeks, calling this a sign that we’re witnessing a “premature plateauing of the recovery.”

“Policymakers across the country have an active role to play in containing the virus and ensuring the nation avoids looming fiscal cliffs from the expiry of unemployment benefits, PPP funds running low, and state and local budgets being cut to the bone.”

The money exists. It is available at the touch of a computer key. It is free to the government. It costs no one, anything.

When people are drowning, you don’t throw them a ping-pong ball and yell, “Use that as your floatation device,” especially when you are standing next to a huge pile of life preservers.

‌And so while it may be an inelegant and imperfect short-term solution for the economy, there is more than enough evidence to support a continuation of enhanced unemployment benefits and another round of stimulus checks for households making less than $100,000.

Deficit spending neither is an “inelegant” nor an “imperfect” solution. It is the solution, the elegant and perfect solution to, and prevention of, recessions.

It is the elegant and perfect solution to homelessness, hunger, business failure, and the terror of impending poverty.

Don’t tell the drowning man to swim harder. And don’t limit federal aid to any household income level. That $100,000 is a trap, for it requires making such questionable determinations as:

Money going to people should be on a per-capita basis, with the same amount going to rich old men and to poor infants.

Money going to businesses should be based on the previous year’s gross sales, with special rules for new businesses.

‌Consumer spending accounts for just about 70% of GDP growth.

And with such a clear path forward for Congress to help support an economy likely to suffer its largest drop in growth since World War II, there is little to no justification for letting these benefits lapse.

There is no justification, financial or moral, for not implementing the Ten Steps, and for not dramatically increasing federal deficit spending to prevent a recession, grow the economy, and narrow the Gaps between the richer and the poorer.

6 thoughts on “Recession? Depression? The federal government has absolute control over what happens next.”