The pundits continue to mislead the public about Monetary Sovereignty, and that is just what the rich want. If you accept their lies, you will have less and less, while they have more and more — and that will make you desperate enough to slave permanently for low wages. 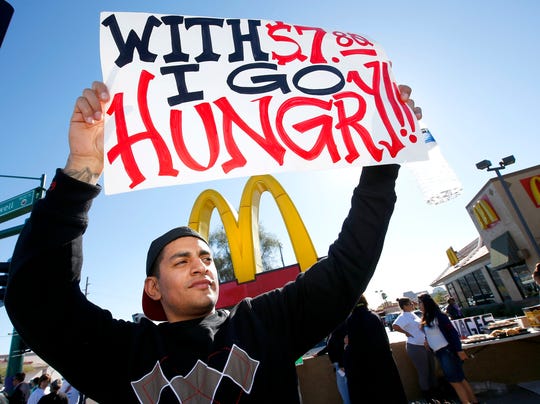 In June, three columnists were quoted by The Week Magazine, Tom Rogan, Michael Tanner, and Jordan Weissmann. What these three men said was outrageously wrong, but it is the norm in today’s “made-to-misinform,” “owned-by-the-rich” media.

The failure to reform entitlements is economic insanity. It will bury the nation in debt, and restrain the opportunities available to future generations.

“The money has run out,” said Rogan in WashingtonExaminer.com. This country is “taking on persistent deficits” and “slowly drowning” in $20 million of national debt.

Trump realizes “he can’t actually balance the budget simply by eliminating ‘waste, fraud, and abuse. The only way to truly reduce federal spending is to . . . cut programs that are popular, supported by powerful, special interests, or both.”

But the federal government never should balance its budget. Never.

And then we come to the craziest comment yet, this one by Jordan Weissmann in Slate.com:

“If you really want to tackle the debt, you have to take on the two giants of federal spending: Social Security and Medicare.

Without entitlement reform, and with massive tax cuts for the wealthy to fund, Trump’s budget is nothing more than a ‘permission slip’ for Paul Ryan and company . . . telling them ‘they are free to go wild butchering the essential pieces of the safety net.”

Finally, we are told that deficit spending is not just a fiscal problem, it is a moral problem:

The Republicans in Congress today heroically (plan to) balance the budget in fiscal 2027 — after increasing the debt every year from 2017 through 2026.

“For too long, the federal government’s excessive spending has put future generations at risk,” says a statement on the committee’s website. “Failure to take swift and decisive action is not only inexcusable, it is immoral.”

A cult leader told his flock the world was about to end, so they should give him all their worldly goods and go to the top of the mountain to await the end. They believed, but when the end didn’t happen, they came down to destitution, haven given everything away.

The next year the cult leader said the same thing, and they believed him again, and every year after that he warned them, they believed, and gave away their possessions, again and again. They were incapable of learning from experience.

I have just told you the federal debt fear-mongers’ story.

“As Nobel Laureate James M. Buchanan wrote: ‘Politicians prior to World War II would have considered it to be immoral (to be a sin) to spend more than they were willing to generate in tax revenues, except during periods of extreme and temporary emergency,'” said the report.

“‘To spend borrowed sums on ordinary items for public consumption was, quite simply, beyond the pale of acceptable political behavior. There were basic moral constraints in place; there was no need for an explicit fiscal rule in the written constitution.'”

Oh, the immorality of it, spending for ordinary items that you, the public may consume.

The rich, “high priests” of America want you to believe that only the rich are entitled to consume.

They want you “not-rich” to work endlessly for scraps. They want you to believe that the worse your life, the more moral you are, and the only way to be moral is to work ’til you drop.

That way, the rich would have a ready supply of slave labor, uncomplaining ignorant, low-wage slaves. It would be “good” for the economy.

Let’s summarize the lies the rich want you to believe.

And that brings us to our last point:

Voting rates go up with income levels — the highest-income group, people in families making $150,000 or more, also had the highest turnout, at 56.6 percent.

If you let them con you, and if you accept their lies, well maybe they will be proved right.

3 thoughts on “Do you deserve to be a desperate, low-wage worker? Protest. Learn. Vote.”