Quantum mechanics is counter-intuitive, partly because of the wave-particle duality, which says that something can be both a wave and a particle simultaneously, but when seen as one it cannot be seen as the other.

Measuring the location of a wave-particle is a matter of probability, wherein the location can be anywhere on the wave. For example, where exactly is the particle expressed by this wave? 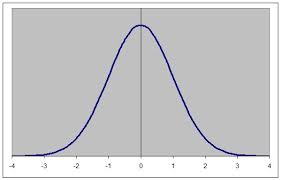 Is the particle At 1? At -2? Answer: Both and neither. It’s more likely to be at 0, but less likely to be there than at all the other options, combined.

Economics too has its counter-intuitive moments, and one of these has to do with the debt-deposit duality, wherein something can be both a debt and not a debt at the same time. Question: How much is the U.S. debt?

Is it the red bar(Debt Outstanding Domestic Nonfinancial Sectors – Federal Government Sector)? Is it the blue bar (Federal Debt Held by Private Investors)? Both or neither? My vote: The federal debt is $0, but if you disagree, we have to identify exactly how and what you are measuring.

Assume your friend asks to borrow $10,000 from you. If before lending that money, you discover your friend already owes various people $5 million, you might be less likely to lend him any more, for fear his debts are unsustainable and he is living beyond his means.

Your concern might be exacerbated if you discover he is asking dozens of people for loans. All that debt could be a serious burden on his ability to repay.

Now consider the circumstance in which you deposit $10,000 in your bank checking account. Is your bank now “in debt” to you? Yes, but not in the same way. You don’t view this as a loan to your bank. You view it as a “deposit.”

And if you discover that not only does your bank have many billions on deposit, but it actively is soliciting more deposits, that probably would not concern you. In fact, you may trust bigger (i.e. having more deposits) banks more than smaller banks.

Either way, when you purchase T-bills, you simply have made a deposit in your T-bill account at the FRB. Should you worry about the size of deposits at the FRB?

You might worry about lending money to a friend who already is deeply in debt, and actively is seeking even more loans. But you probably didn’t worry about making a deposit at your local bank. So why would you worry about your deposit at the world’s safest, most powerful bank, the FRB?

JPMorgan Chase & Co. is weak compared with the Federal Reserve Bank, but has more than $1 trillion in deposits (debt). So, with all that “debt,” are they living beyond their means? Probably not. Last year, their profit exceeded $20 billion.

If someone says, “The government is $10 trillion in debt,” that may sound worrisome. But if someone makes the even more correct statement, “People have deposited $10 trillion with the Federal Reserve Bank,” you probably would not think that translates into, “The federal government is ‘living beyond its means.'”

The statements are identical. “Deposits” simply have a different inference from “debt,” though in one sense, deposits are debt.

The agenda for many people, particularly the upper .1% income/wealth group, is to scare the 99.9% with “debt clocks” and frightening statements about the federal debt being “unsustainable” or the government being “broke.” These lies rely on the negative implications of the word “debt.”

The nefarious purpose is to encourage the population’s agreement with austerity (debt cutting), which widens the gap between the .1% and the 99.9%.

Our Monetarily Sovereign federal government is not, and cannot go, “broke.” Deposits at the FRB cannot be “unsustainable.”

The Federal government doesn’t even owe those deposits; the FRB does, which it pays back simply by transferring dollars from holders’ T-security accounts to the same holders’ checking accounts.

And since the federal government doesn’t owe those T-security dollars deposited with the Federal Reserve Bank, I believe the federal debt is functionally $0.

The next time someone tells you the government owes trillions of dollars, which our grandchildren will have to pay, ask him, “Are you referring to the trillions of dollars in deposits at the Federal Reserve Bank, which are paid off simply by transferring dollars from depositors’ T-security accounts to their checking accounts?”