Mr. President, Members of Congress: WTF is wrong with you people?

Could it be that you really don’t know that:

1. The U.S. Government is Monetarily Sovereign. That means it has the unlimited ability to create U.S. dollars. The U.S. government never can run short of dollars. Even if all federal tax collections totaled $0, the federal government could continue spending, forever.

Well, there’s:
Chairman Alan Greenspan: “A government cannot become insolvent with respect to obligations in its own currency.”

And there’s:
Chairman Ben Bernanke: “The U.S. government has a technology, called a printing press (or, today, its electronic equivalent), that allows it to produce as many U.S. dollars as it wishes at essentially no cost.”

And there’s:
The St. Louis Federal Reserve: “As the sole manufacturer of dollars, whose debt is denominated in dollars, the U.S. government can never become insolvent, i.e.,unable to pay its bills. In this sense, the government is not dependent on credit markets to remain operational.”

2. And because the federal government has the unlimited ability to create dollars, federal deficit spending does not require tax increases. Federal taxes do not fund federal spending.

How do we know? Because since 1940, the federal government has spent more than $20 trillion that was not funded by taxes. That is how we came to have a $20 trillion debt.

And yet, over those 80 years, the economy has grown substantially, with minimal inflation.

3. The federal debt is no burden on taxpayers, and it is not an inflationary problem, either.

While the federal debt has risen dramatically, inflation has been moderate and within the Federal Reserve’s targets.

Those who predict that federal deficit spending will cause an inflation similar to the Weimar Republic, Zimbabwe, or Argentina are very simply not supported by history.

Mr. President and Members of Congress, you are sitting on an infinite pile of money, pretending you are trying to prevent a recession or a depression, but on the cheap.

And rather than just preventing a recession or a depression, you are not even trying to improve the lives of us people.

WTF is wrong with you people?

Why are you pulling FICA taxes out of our pockets, when even the originator of Social Security, President Franklin D. Roosevelt, knew that SS taxes are not necessary?

Luther Gulick, 1971: “In the course of (a) discussion (with President Roosevelt) I raised the question of the ultimate abandonment the payroll taxes in connection with old age security and unemployment relief in the event of another period of depression.

“I suggested that it had been a mistake to levy these taxes in the 1930s when the social security program was originally adopted.

“FDR said, ‘I guess you’re right on the economics. They are politics all the way through. We put those payroll contributions there so as to give the contributors a legal, moral, and political right to collect their pensions and their unemployment benefits.

“‘With those taxes in there, no damn politician can ever scrap my social security program. Those taxes aren’t a matter of economics, they’re straight politics.‘”

Mr. President and Members of Congress, Roosevelt understood what you don’t seem to understand: FICA taxes are not economically necessary.

You could eliminate them today, at the stroke of a pen, and add well over a trillion dollars to the economy.

And that money would go to exactly the right place: We working men and women of America.

And it would be so easy. Just stop collecting it. No complicated laws are necessary.

Simply fund Social Security, Medicare, et al the same way you fund it now. The simplest thing you ever have done.

But you resist doing it. WTF is wrong with you people?

The sole purpose of government is to improve and protect the lives of the people.

And yet you resist funding free Medicare for All — free health care insurance for every man woman and child in America.

Some of you, to avoid your responsibility, apply the false epithet, “socialism,” to any federal funding of anything.

Wake up. “Socialism” is federal ownership and control, not simply funding.

Medicare is not socialism, though the Veterans Administration hospitals are socialism. They are owned and controlled by the government. See the difference?

So which do you prefer, and why do you snarl “Socialism!” every time Medicare for All is proposed?

What is your plan? For the middle classes and poor to do without health care? For millions of Americans to choose between financial destitution or death? For elderly people lacking money, to be denied even the bare comforts of a nursing home?

Is that your plan?

WTF is wrong with you people?

You all march around pretending to be a great friend to the common man. Yet, you keep reducing Social Security payments and availability, when you should increase them.

You even collect income taxes on Social Security benefits, which is beyond ridiculous.

Why would any sane government first take tax money from the people, then provide those same people with money benefits, and finally take back some of the same money?

The whole process makes no sense.

The government easily could provide Social Security for All — every man, woman, and child in America, simply by lowering the age requirement.

It would take little more than a click of a computer key.

Yet you resist by claiming federal deficits are “unsustainable,” and all the while knowing the federal government can “sustain” any level of debt.

Warren Buffett: “Those who regularly preach doom because of government budget deficits (as I regularly did myself for many years) might note that our country’s national debt has increased roughly 400 fold during the last of my 77-year periods. That’s 40,000%!”

Warren Buffett knows it and you know it, too.

So WTF is wrong with you people?

And then we come to student debt. As you well are aware, America’s future depends on the education of our young people.

Yet, you do very little to provide free education for America’s youth. As for grades K-12, you force the costs to rest largely on the backs of local government taxpayers.

Local governments are not Monetarily Sovereign, and so do not have your unlimited ability to create dollars.

So we taxpayers must pay, and this impoverishes us, which results in poorer schools and poorer people.

And rather than providing free college for all, as you easily could, you offer loans, thus indebting millions of young people.

Look at this disgraceful graph: 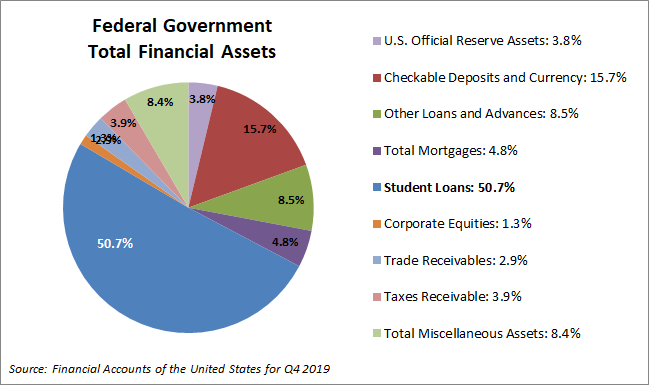 It shows that an astounding 51% of federal assets are owed to the federal government by America’s students. These are the young people who leave college with a giant millstone on their backs.

They should be spending their time and money creating new ideas, new businesses, new products — all to grow America.

Instead, they are spending their time trying to gather money and send it to a federal government that not only doesn’t need the money, but destroys it upon receipt.

If any enemy nation wished to ruin America, one of their first acts would be to impede America’s college students.

Which is your plan? To prevent people from attending college, or to prevent them from using their college education? You are doing both.

Is this the way you “improve and protect the lives of the people?”

Below, is a list of Ten Steps to Prosperity, which if taken would save America’s economy, yet you resist implementing any long term actions. Everything you do is limited to a few days or weeks.

That is the extent of your planning.

Mr. President and Members of Congress, at long last, WTF is wrong with you people?

2 thoughts on “Mr. President, Members of Congress: WTF is wrong with you people?”