Because you do not have enough hassle in your life:

If you fly domestically, effective Oct. 1 2020 the federal government will require you to use a valid U.S. passport or obtain a REAL ID.

Here’ what you need to do. This all is listed on: https://realid.ilsos.gov/home.html. [The “IL” in the address is for Illinois. Use your own state 2-letter identification]

Step 1: Visit a Secretary of State Driver Services facility and take your photo and any required exams.

Step 2: All applicants must provide proof of identity. (Examples are: a certified U.S. birth certificate, a U.S. passport, an employment authorization document, a permanent resident card or a foreign passport with an approved I-94 form.)

Name change documents, such as certified copies of a marriage certificate, etc., will be required if the applicant presents a certified birth certificate with a name different from his/her current name.

Please note: Multiple name change documents will be required if your name has changed multiple times.

Step 3: All applicants must provide proof of full Social Security number (SSN). (Examples are: an SSN card, a W-2 or a pay stub with full SSN.)

Step 4: All applicants must provide two current residency documents with the applicant’s name. (Examples are: a utility bill, rental agreement, deed/title or a bank statement.)

Step 5: All applicants must provide proof of signature. (Examples are: a credit/debit card, canceled check or current Illinois DL/ID.)

Step 6: Receive a temporary, secure paper DL/ID at the facility.

Please note that the TSA and federal agents will not accept the paper document.

Step 7: After review and verification of documents have been conducted, your new permanent REAL ID card will be mailed to you within 15 business days.

After you have spent hours of your time gathering all the necessary materials, and then waiting in endless lines at your Secretary of State drivers license office, ask yourself these two simple questions:

The whole process is an unnecessary waste of your time and your state tax money (Yes, many millions of your state tax dollars  — dollars that better could be used for schools, roads, upgraded voting systems, etc. — instead will be diverted to this useless exercise.

Here is what Eric Zorn of the Chicago Tribune says about REAL ID:

Real ID is a solution in search of a problem.

The federal Real ID Act of 2005 was part of a series of legislative moves aimed at fighting global terrorism in the wake of the 9/11 attacks in which the hijackers used fraudulent driver’s licenses to board the doomed airplanes.

The shift to a more comprehensive, secure identification system was supposed to take effect in 2008, but deadlines were extended and extended again in large part because of controversy over the idea.

In 2007, the Illinois General Assembly passed a joint resolution calling for the repeal of the Real ID Act on the grounds that it creates a de facto national identity card that threatens privacy interests, that it will be part of broadened efforts to crack down on illegal immigration and that it will burden the states with the costs of implementation.

Lawmakers in 25 other states ultimately registered similar or even stronger objections.

Barack Obama, who opposed the Real ID Act when he was a U.S. senator, did little to enforce it when he was president from early 2009 to early 2017. And why would he have? The post-9/11 enhanced airport security measures were working just fine.

From Sept. 11, 2001, until today, with domestic airline passengers being allowed to board with ordinary driver’s licenses, there have been zero hijackings.

So it was more than baffling when, in June 2017, President Donald Trump’s then-Homeland Security Director John Kelly announced that Real ID “is a critically important 9/11 Commission recommendation that others have been willing to ignore, but I will not.

I will ensure it is implemented on schedule — with no extension — for states that are not taking it seriously.” 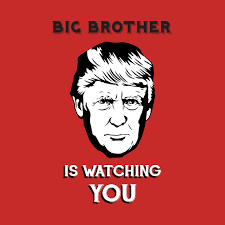 In short, Trump and his followers are paranoid about illegal immigrants (You know, those folks with a lower crime rate and a higher work ethic than U.S. citizens).

This paranoia extends beyond a useless wall (that Mexico won’t pay for, despite daily promises by Trump), and cruel raids and cruel deportations and cruelly ripping traumatized children from their decent, hard-working, valuable-to-America parents.

No, the Trumpist paranoia includes even you, good citizen.

Now you and everyone must carry a national identity card, the first key step in the Big Brother federal government’s ability to watch you and to track your every move.

And considering the cheek-to-cheek relationship between Trump and Putin and Kim and whoever that murderous Saudi prince is, and Israel, and Syria, and Britain, et al, you can look forward to the time when your name and face and where you go and what you do, every second of every day, are known to governments all over the world.

So for the convenience of our rulers, perhaps the next step will be to tattoo a bar code on your forehead, the day you are born.

Say, “Goodbye” to privacy. Say “Hello” to that big Trumpian eye in the sky.

But won’t it be nice to be known the world over? Thank you, Donald.

One thought on “Do you have a REAL ID card?”