Perhaps you believe that Donald J. Trump is a lying, incompetent bigot and an obvious con man.

Either way, it may not be his fault or yours.

The word “fault” no longer may apply to our lives.

The standard “Big Bang” model, which currently is one of the accepted descriptions of our universe’s beginning, holds that everything started from essentially nothing.

This science posits that about 13.7 billion years ago, give or take a few hundred million, a dimensionless point, according to as yet unknown laws of physics, somehow expanded via something we call “inflation” to almost the size it is today.

And did this in less than a second.

We say, “laws of physics,” but laws are invented by humans, and we don’t know what laws apply,  if laws apply, or even if there are laws.

“Inflation” is just a meaningless word for, “We don’t know how the universe came to be so big, so in our ignorance, we gave it a name.”

One even could say the 13.7-year time scale is meaningless, because time as we believe it to be, is relative to speed and gravity, neither of which we can measure with assurance that far back, and in any event, “years” relate to earth’s turns around the sun, which didn’t exist.

So the whole thing is based on smoke and mirrors, but it’s a tale that helps us to visualize a story, if not to know the truth.

We currently think the early universe was composed of energy, whatever that may have been then, which according to certain laws of physics (those “laws,” again) somehow formed particles.

And we believe these particles somehow assembled into and hydrogen and helium atoms, which further assembled into stars, and the stars exploded creating all the visible matter in the universe — including you and me.

According to the known laws of physics, every atom of your body at one time existed in a star.

The second law of thermodynamics states that the total disorder of an isolated system cannot decrease over time.

For instance, a bottle can break into a thousand pieces, but those pieces cannot spontaneously reassemble. Yet that is exactly what the universe is said to have done.

Fundamental to our beliefs about the physical world is the notion that nothing happens without a cause. An atom does not simply decide to move. Interactions with something — another atom and/or a force — move it.

And for those interactions to happen, there must have been a previous cause, which themselves had a cause, and over again and again, dating back forever, or at least to the so-called “Big Bang,” which too must have had a cause.

It is like the child’s endlessly asking, “Why?” following every explanation. Everything has a “why?”

The atoms of your brain follow cause and effect. Your every thought, emotion, and action results from those atoms being impacted by other atoms and forces, in an endless chain.

Think about it. Can you imagine any mechanism by which your so-called “will” could change the directed actions of the atoms and their forces in your brain and the rest of your body?

Are you angry? Happy? Puzzled? Hungry? Curious? Sad? Do you walk, run, speak, sing, or fire a gun?

Do any of these not involve the actions of particles in your brain and body — atoms that came to you from exploding stars many light years distant?

What control could you have over any of your brain’s particles, without involving particles that are affected by other particles, down through history?

But why do you want to? Doesn’t this desire involve the atoms of your brain, atoms which may be billions of years old? And haven’t these atoms been affected by other atoms for billions of years?

Every action in the universe involves the cause and effect dances among particles.

Visualize watching a movie. You may like or dislike the characters on the screen. You may wish them well or ill. You may cross your fingers or whisper a prayer. You may close your eyes in fear or open them wide in enjoyment.

But all your efforts will not affect the movie’s action. The movie you see is an illusion. The outcome is predetermined.

Since every action is the result of a previous action, everything you do is predetermined:

Despite what you may choose to believe, you have no free will.

And it all began with something currently named, “the Big Bang, or perhaps even before then.

So when I tell you about Donald Trump’s negative characteristics, I illogically may hope it will affect your beliefs and your future actions, especially your voting actions.

But everything — my choice of words, your belief, your subsequent actions, even my hopes — everything has been determined by what came before — billions of years, before.

I can no more alter my destiny or your opinions than I can change the orbit of a Milky Way constellation.

“The Moving Finger writes; and, having writ,
Moves on: nor all thy Piety nor Wit
Shall lure it back to cancel half a Line,
Nor all thy Tears wash out a Word of it.”
Omar Khayyám

Consider “quantum entanglement.”  Overly simplified, quantum entanglement describes two or more tiny particles relate in such a way, that what happens to one, instantly and predictably affects the other, no matter how far apart they may be. 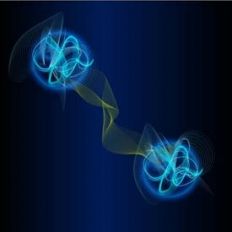 One particle can be here on Earth and the other can be sent to Mars, yet if you change particle #1, particle #2 simultaneously will change in a predictable way, even though there is no way that particle #2  could have “learned” what change you made to particle #1.

It would be as though particle #2 were able to “predict” what change you decided to make in particle #1, even before you made it, and thereby change preemptively, before the information arrived. This is one of the great mysteries of quantum mechanics.

One solution to this puzzle of prior knowledge would be for everything to be inevitable and determined by the actions of all that came before.

Just as with the start of a movie, the ending is predetermined. Your action on particle #1 and the change in particle #2 both are predetermined, so “prediction” is not an issue.

If everything is predetermined, and we have no free will, why do I bother? Why do you bother? What’s the use of our efforts? Why do we hope and strive? Why do we experience joy and disappointment?

And the answer, of course, is we have no alternative and no control. We are pre-programmed robots, and part of our programming is not only to believe we have free will, but to hope and strive and to experience.

Things are what they are, because of cause and effect, down to the smallest level.

And finally, whether or not you believe this, or doubt it or have learned from it — all that was determined many billions of years ago.

Our movie has been filmed.

I hope you enjoy it, though that already has been determined.

16 thoughts on “Perhaps it isn’t Trump’s fault, after all. Free Will or Inevitability.”