You have been invested in the stock market for the past nine years. You now view yourself as a financial genius. Calm down. It would have taken exceptional “skill” for an investor not to have made money, lots of it, in this bull market.

And the market still bulls upward, newly propelled by the anticipation of stimulative federal tax cuts.

Why do tax cuts simulate? Very simply, because they leave more dollars in the economy.

But if for some strange reason, you are forced to give the gas station more gasoline than you receive (i.e. the station runs a gas surplus), your driving will be limited.

Now, you begin to see articles by pundits, who tell you the end is nigh, or surely must be nigh, because all bull markets end, sometime. The January/February issue of MONEY Magazine contains just such an article. It is titled, “3 Ways This Bull Market Could End.”

The “3 ways” are interesting, and each contains a grain of truth, but they don’t include the real way this bull market will end.

Scenario #1: The Economy Did It
What bull markets fear most isn’t the shock of war or political crisis, but recessions.

Two-thirds of all bull markets since World War II have ended in anticipation of an economic contraction. Still, most traditional indicators are signaling that the economy is doing just fine and isn’t likely to shrink in the next year or two.

Historically, real estate construction has been a terrific indicator of the economy because it takes months to construct a new home. Every recession since 1960 was preceded by a double-digit decline in housing starts.

Yet in October housing starts rose by double digits—13.7%, to be exact—indicating that construction firms aren’t betting on a slowdown in the economy in 2018.

The central bank actually started lifting rates in late 2015. Four years after that would put a possible recession start date in late 2019. And if stocks foreshadow recessions up to a year before, that means a bear could be lurking at the end of 2018.

The stock market is the world’s business-prediction method. With hundreds of millions of investors inputting their beliefs, it is the ultimate “Wisdom of the crowd” device.

Further, federal interest rate hikes are not, in of themselves, recessive. On the contrary, to the degree a rate hike forces the federal government to pay more interest dollars into the economy, the increased rates are stimulative.

It is the disease (inflation), rather than the cure (higher interest), that causes the symptom: Recession.

Scenario #2: The Fed Did It
Central bankers at the Fed have publicly stated that they believe there will be around two or three more rate hikes in 2018, bringing the so-called Federal funds rate, which banks charge one another on overnight loans, to around 2% or so next year.

The markets have a knack for testing newly installed Fed chairmen.

It happened to Alan Greenspan, who became chairman in August 1987, at the end of an economic cycle. The Greenspan-led Fed proceeded to raise interest rates just before the October 1987 crash.

Similarly, Ben Bernanke assumed the Fed chairmanship in 2006 toward the end of another economic cycle as the central bank was hiking rates—and just before the 2007–2009 bear market.

The Fed doesn’t even have to make a big error—for instance, by raising rates too aggressively—to spook the markets. Simply raising rates unexpectedly or communicating their intentions poorly “could create volatility as rates rise.”

Although functionally, interest rate increases are not recessive, the mere belief that they introduce recessions can be sufficient to cause recessions.

The 2007-2009 bear market, which corresponded to the “Great Recession,” was caused by flagrantly illegal lending by big banks, not by interest rates.

Scenario #3: The Market Has a “Minsky” Moment
A “Minsky moment,” named after the late economist Hyman Minsky, who studied boom-and-bust cycles in the financial markets and argued how unstable bull markets can be after a long run.

[Investors take on additional risk during prosperous times or bull markets. The longer a bull market] lasts, the more risk is taken in the market. Eventually, so much risk is taken that instability ensues.

A Minsky moment was blamed in part for the global financial crisis, when investors took on ever more debt to make speculative investments in houses and mortgage securities without worry until it eventually reached a tipping point when every investor did start to worry.

To be sure, Rob Arnott, chairman of Research Affiliates, notes that “the temptation in a bull market is to buy more.”

Not only does a bull market tempt investors to buy more, but the bull market itself automatically rebalances an investor’s portfolio toward more speculative, higher-flying investments.

Market action alone could take a very conservative portfolio consisting of 50% stocks and 50% bonds, into a new, aggressive ratio of 75% stocks and 25% bonds.

And now, The Real Reason for Recessions: 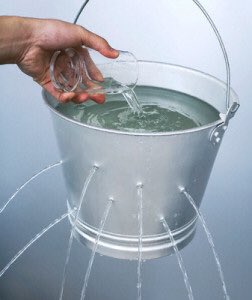 While Federal Spending adds dollars to the economy, federal taxes take dollars out of the economy. The difference between spending and taxing is Federal Deficit Spending, the net amount of dollars the government adds to the economy.

If the normal federal deficit instead becomes a federal surplus, the economy will have a Depression or at “best,” a recession.

Even reductions in deficit growth can lead to recessions:

As the federal deficit growth line drops, we approach recession. Recessions are cured only by deficit increases.

Recently, the Republican-dominated Congress passed a tax law that included reductions in business and personal taxes, predicted to add $1.5 Trillion to the federal debt.

That represents $1.5 Trillion added to the economy, which is stimulative — or would be stimulative but for this:

Because deficits add stimulative dollars to the economy, deficit reductions lead to recessions. If Ryan cuts federal spending for social programs, we will have a recession, the severity of which will be related to the size of deficit cuts.

Starve consumers of their purchasing dollars, and businesses will experience reduced sales and profits.

In summary, interest rates are not a true point of concern. Rather, deficit growth cuts, or worse yet, federal surpluses, will drag us down to recession or depression, and only massive deficit spending will cure the disease.