As this post is being written, more than 100 House Republicans have signed on to an extraordinary lawsuit by the State of Texas, to overturn the entire Presidential election, and action that if successful, would end the United States of America as we know it.

There is a reason we are known as the United States. We are composed of individual, sovereign states, united for mutual protection and benefit.

How did Trump alienate the Christian right to the point of civil war advocacy? Here’s one opinion

It’s one of the most enduring conundrums of the Donald Trump era: How is it that the Christian right, the self-appointed monitors of American morality, have come to so enthusiastically back a thrice-married chronic adulterer who lies as easily as he breathes?

When we think of the religious right, we’re often thinking of a cultural movement or social movement that works from the bottom up, expressing the anxieties and reactions of a particular group in American society to change social realities, focused on issues like reproductive rights or same-sex marriage.

But Christian nationalism really works from the top down. It actively shapes and manipulates its target population, and it often shifts its target.

When movement leaders are talking to the congregants or to pastors who speak to congregants, it’s all abortion all the time. The foot soldiers may even believe that they’re fighting for things like a ban on abortion or same-sex marriage, but the leaders have actually consciously reframed these issues in such a way that they can control the vote of a large subsection of the American public.

They use that to solidify and maintain political power for themselves and their allies, to increase the flow of public and private money in their direction, and to enact economic policies that are favorable to their funders.

(They argue) that social welfare programs have no basis in Scripture. He says that the government should not directly fund needs for the poor. (They say) the responsibility to meet the needs of the poor lies first with a husband and a marriage, second with a family if the husband is absent, and third with the church.

(They say) nowhere does God command the institutions of government or commerce to fully support those with genuine needs.

These policies are incredibly favorable to the plutocratic fortunes that are funding the movement. The movement wouldn’t be what it is without some subsection of very wealthy individuals and extended families that are supporting the movement financially. I’m thinking of like the DeVos, Prince families, the Green family, and so many others that I described in my book.

These families, in turn, benefit from a deregulation of lack of environmental control regulation, low taxation, and minimal workers’ rights. 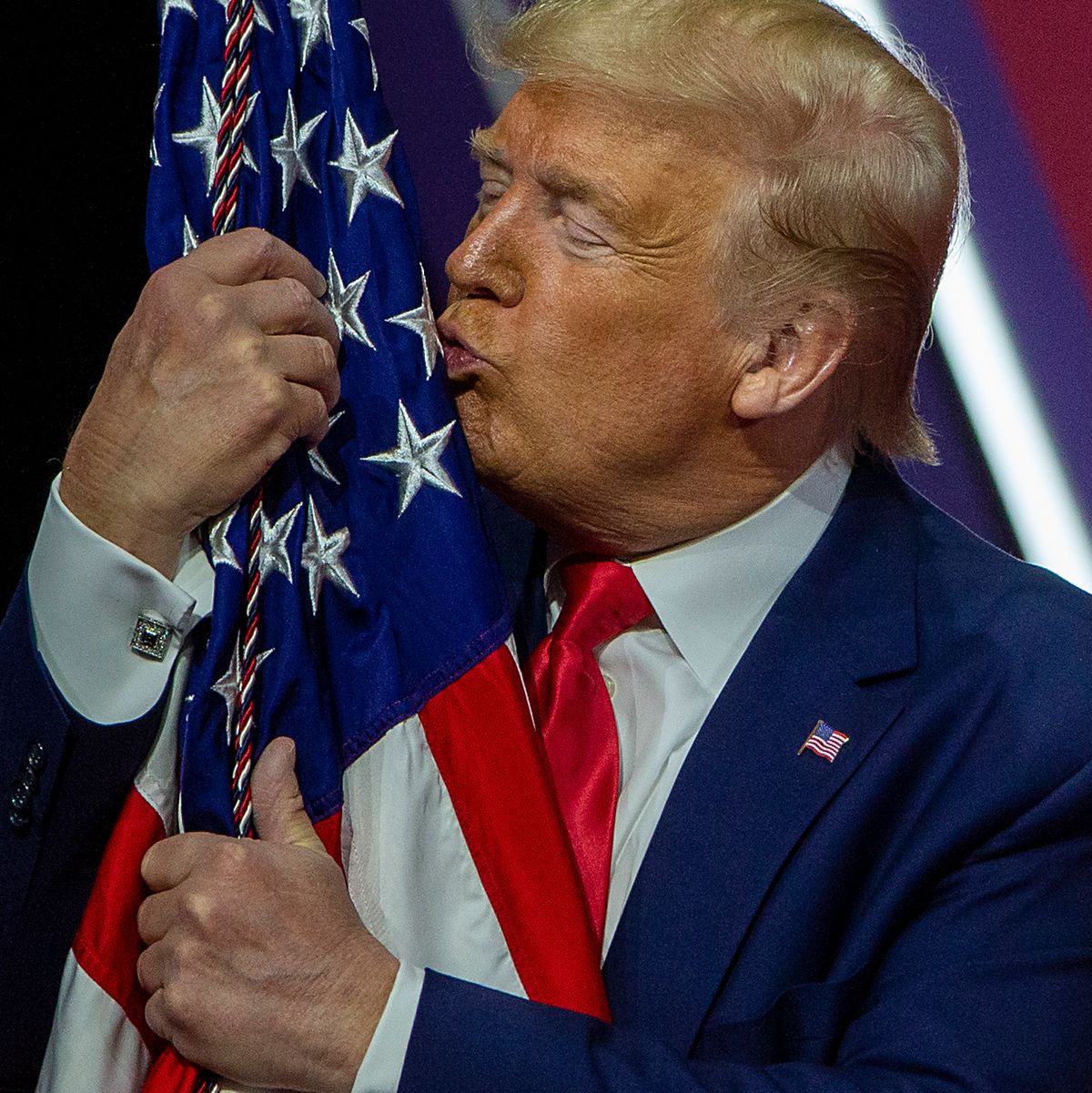 If you wonder why a truly religious person would want to let the environment go to hell, reduce workers rights, separate children from their parents, cut taxes on the rich, eliminate healthcare for the poor, and support the least religious human being on this planet, the answer is: It’s what the ultra-rich want, and in America, it is the ultra-rich who control the beliefs of the common people.

The First Amendment to U.S. Constitution says, “Congress shall make no law respecting an establishment of religion, or prohibiting the free exercise thereof; or abridging the freedom of speech, or of the press, or the right of the people peaceably to assemble, and to petition the government for a redress of grievances.”

The reason for divorcing religion from politics is that the combination of religion and politics historically and inevitably leads to dictatorship.

If a political leader also wears the mantle of religion, how do the people voice grievances against God? That leader can provide interpretations of his favorite Bible (and there are infinite interpretations voiced daily) to benefit himself and his family.

He could, for instance, claim that God wills the public not to support the poor, but rather to support the rich. Sounds ridiculous, doesn’t it? But that is exactly what the right-wing of America has done, all in the name of abortion.

Yes, by elevating abortion above all other considerations, the rich have convinced the right-wing, especially the religious and poorly-educated, to vote against their own consciences and well-being.

In essence the rich tell the poor, “If you let me cut down the forests, pollute the water and air, heat the earth, keep your salaries low, eliminate your healthcare, and turn a blind eye to the leader’s evil, irreligious ways, I’ll vote against the single most important thing in the world: Abortion.”

By framing it as “God’s will,” the rich are able to convince the poorly educated, and the Republican party of sycophants, to go along with ideas they otherwise would find abhorrent.

Religion is far more emotional than logical, which is why a man who clearly has never stepped inside a house of worship, can hold up a bible and claim “They’re trying to take religion away,” and not be laughed off the stage.

Aside from adopting the religious flag, Trump has two more flags to wave: Patriotism and masculinity, both of which live in most hearts, but have special appeal to the less educated.

On a basic level, patriotism is like fandom. “Fandom is a subculture composed of fans characterized by a feeling of empathy and camaraderie with others who share a common interest.”

America is the greatest country in the world — if you’re an American. Otherwise, France is. Or England is. Or Israel is. That pride of membership is translated as patriotism. Being a patriot is considered good just as being religious is considered good. That is why Trump followers love to wave the American flag every time they attend a rally held by the oft-time draft-dodger.

The excessive use of flags is a kind of “lady doth protest too much” support for an infamous Putin-loving, Kim-loving, ally-hating traitor-to-America President.

And then there is masculinity.

When President Trump was released from the hospital after being treated for COVID-19, he had a prescription for how Americans could handle the coronavirus.

“Don’t let it dominate you. Don’t be afraid of it,” he said in a video from the White House. The apparent idea: that the coronavirus, which has killed at least 225,000 people in the U.S., could be wrestled into submission.

Trump’s overt hypermasculinity was a defining feature of his candidacy in 2016, whether he was talking about his testosterone count or his penis size or shrugging off the infamous Access Hollywood tape, in which he talked about committing sexual assault as “locker room talk.”

That macho approach went on to define his presidency as well. Trump has been blatant about amping up his particular, aggressive and pugilistic brand of masculinity. After four years, that machismo has manifested itself in seemingly every area of his presidency.

Trump and some of his high-profile supporters often portray mask wearing as a sign of weakness. He mocked Joe Biden in the first debate for wearing a mask, and Trump implied at one point that to wear one publicly would be to give in: “I didn’t want to give the press the pleasure of seeing it.”

Conservative commentator Tomi Lahren was more explicit in linking masks to gender, joking that Biden “might as well carry a purse with that mask.”

In the past, men have been less likely to adopt all sorts of public health measures, like wearing seat belts and helmets. Trump has enormous messaging power to encourage mask-wearing, or discourage it. As it stands, Republicans are less likely than Democrats to believe masks are effective, or to say they wear masks.

Trump has praised strongmen or authoritarian leaders. He has hailed Russia’s Vladimir Putin and China’s Xi Jinping as “strong” and Turkey’s Recep Tayyip Erdogan as “a tough guy who deserves respect.”

Trump’s pugilistic style also could exacerbate existing tensions, as when Trump tweeted that he had a “much bigger and more powerful” “Nuclear Button” than North Korea’s Kim Jong Un — “and my button works!”

Masculinity is also reflected in Trump’s economic rhetoric. He was blatant about it this week when he told a crowd in Michigan, “We’re getting your husbands back to work.” (This is despite the fact that women have disproportionately dropped out of the labor force during the pandemic.)

But it also has arguably long been present in the president’s insistent focus on male-dominated, blue-collar professions.

In multiple major economic addresses and State of the Union speeches, Trump has highlighted professions like manufacturing, mining and construction, but virtually ignored other working-class, “pink-collar” workers in female-dominated, care-oriented jobs like nursing or health aides. And in his job-creation initiatives, Trump has also tended to focus on those blue-collar areas — particularly manufacturing.

Indeed, he seems to relish the public appearances he gets to do while promoting these industries, as he dons hard hats or sits behind the wheel of a semi.

Trump’s hyper-masculinity even filters down to the women.

More than one-third of non-incumbent Republican women running for Congress had campaign materials prominently featuring them with guns.

But people do not live in a logical world. Most human decisions are emotional.

Trump has overcome what might seem to be his disastrous shortcomings by focusing on several emotional appeals: Religious opposition to abortion, patriotism, and hyper-masculinity, all three of which carry special weight with his political base: Less educated, Christian Evangalist, males.

Add in those Jews, who are taken with his seeming support for Israel, and Trump needs only a relative few people of color, foreign-born, females, and gays.

The entire GOP, even those who secretly despise Trump and all he stands for, has been impressed with the cultish fervor of his followers. Like people being swept up in a crowd of rioters, they find themselves first leading, and then following the pack of traitors Trump has unleashed.

Historically, those who give birth to war, later are consumed by their offspring.

And so it will be with Trumpism, as the entire nation is consumed by the hatred he has sown.

4 thoughts on “Why the Trump, McConnell, the GOP, and Putin are aching for an American civil war.”