Do you consider yourself a member of the “middle class”?
Do you feel the survival and prosperity of the middle class are in your own best interests?
Is that the way you vote?

The nation’s middle class, long a pillar of the American economy, has shrunk to the point where it no longer constitutes the majority of the adult population, according to a new major study.

Rapid growth of upper-income households, coupled with an increase in less-educated, low earners, has driven the decline of the middle-income population to a hair below 50% of the total this year, the Pew Research Center reported Wednesday.

In 1971, the middle class accounted for 61% of the population, and it has been declining steadily since.

In short, the Gap between the rich and the rest has been growing. The middle and the poor have become realively poorer. 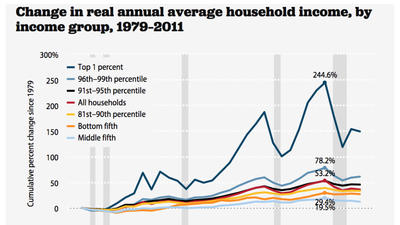 The tipping point appears to have occurred in the past couple of years of the recovery from the Great Recession as the economy has continued to reward the highly educated, well-to-do investors and those with technical skills.

Middle-income households have been the bedrock of consumer spending, and many liberals, in particular, view the declining middle as part of a troubling trend of skewed income gains among the nation’s richest families.

It is the liberals who are concerned about this phenomenon. The conservatives are delighted, as reflected in their initiatives to cut social spending, while offering regressive tax “reforms” (“flat tax,” “sales tax,” etc.) which would tax the middle and poor more.

Pew defined middle class as households earning between two-thirds and twice the overall median income, after adjusting for household size. A family of three, for example, would be considered middle income if its total annual income ranged from about $42,000 to $126,000.

It’s questionable whether a family of three earning $42,000 per year should be considered “middle class,” the same as a family earning $126,000.

Most Americans have traditionally identified themselves as middle class, even those at the top and bottom, reflecting a kind of cultural heritage tied to the American dream of self-reliance.

A Gallup survey this spring showed that just 51% of U.S. adults considered themselves middle or upper middle class, with 48% saying they are part of the lower or working class.

That leaves 1% to identify as upper class.

At the same time, many median-income voters, particularly non-college-educated men, are at the core of billionaire Donald Trump’s support in the Republican campaign, and the sense that their once-secure middle-class standing is in danger appears to be fueling their anger at the government and at immigrant groups.

In short, they are willing to hurt themselves, if they can hurt those below them.

Pew’s findings add to strong evidence that the middle class has been thinned partly by a decline in manufacturing due to competition from imports as well as a broader polarization of jobs that has favored the most educated and technically skilled workers.

Elizbeth Espinoza and her husband, Carlos Arceo, both 38, fall squarely in the middle class. Espinoza said that she and her husband were hopeful about their future incomes rising, but she doubts that they can move up to the upper-income tier. “I feel like upward mobility keeps getting harder and harder,” she said.

Research on income mobility across generations has found the U.S. as a whole lags other Western countries.

The government uses the false excuse about federal debt being “unsustainable,” or that social benefits discourage the middle and lower income groups from working. Both narratives have no basis in fact.

The media, the politicians and the economists, being bribed by the rich, like to characterize the lower income groups as lazy indolents, who would rather receive free “goodies” from the government, than work. <b<Factually, it isn't true, but the myth satisfies the higher groups' need to feel superior.

This site has published examples of politicians referring to the federal debt as a “ticking time bomb” as early as 1940 (Sept 26, 1940, New York Times).

Despite this gargantuan increase, the “time bomb” still is ticking.

If you were a member of a sect, whose leader repeatedly took you to a mountain to await the end of the world, and the world never ended, at what point would you decide the leader either was lying or ignorant of reality. After the first time? After the tenth time? Twentieth?

The statement that the federal debt is “unsustainable” or will cause hyper-inflation, has been made every year for the past 75 years! At long last, are you ready to disbelieve the lie?

Or will you continue to vote Republican (they are the main authors of bills to reduce social spending and increase lower-income taxes — at the detriment to you)?

I’ve received many angry notes from conservatives, but you folks shouldn’t be angry at me. Blame the people who destroy your life-style and your childrens’ futures.

If you are in the middle-or-lower income group, and you suffer because you pay too much FICA, and don’t receive enough unemployment compensation, Medicare, Medicaid, funding for college, Social Security, food stamps and other social benefits, the fault is yours if you voted conservative.

The right wing has set you against your own best interests. You voted for your tormentors, just to torment those below you.

Interestingly, much of the lower income group has it figured out. As soon as the middle smartens up, conservatism will lose its appeal.

Recessions come only after the blue line drops below zero.

2 thoughts on “The middle class “self-squeeze””