We are in the year 2015, an enlightened year of science and technology, as contrasted with the Dark Ages, supposedly ruled by superstition and ignorance.

Yet, in this enlightened year:

A major survey of US opinions has revealed that huge numbers of people reject Darwinian evolution, consider GM foods unsafe to eat, and doubt that human activity is warming the planet. 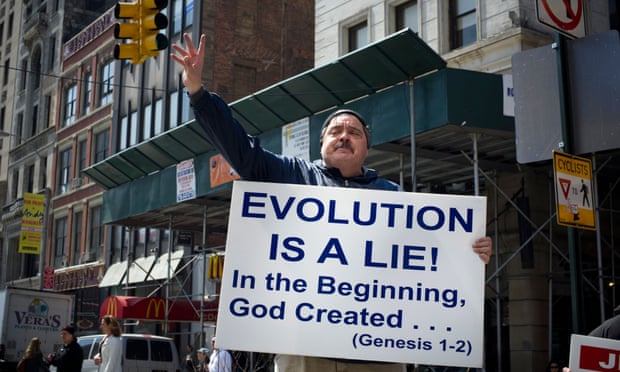 “We’ve got to stop being the stupid party. It’s time for a new Republican Party that talks like adults. We had a number of Republicans damage the brand this year with offensive and bizarre comments. I’m here to say we’ve had enough of that.”

Republican candidate, Ben Carson, the neurosurgeon and living embodiment of mental compartmentalization (i.e., smart in one area; stupid in others), denies Darwinian evolution.

When faced with enormous evidence, Carson backtracked and said: “Microevolution versus macroevolution are two different things.”

What did he mean by that?

Carson acknowledges that microevolution happens (though many evolution deniers don’t.) Carson, however, continues to deny that one species can evolve into another species (macroevolution).

The main problem with Carson’s desperate attempt replace science with biblical lore is that “species” is an artificial construct, created by people in an attempt to categorize living creatures. (Humans love to categorize.)

In that sense, nature does not create “species.” People do. And, there is no agreement about exactly what a “species” is.

One common, but sometimes difficult, question is how best to decide which species an organism belongs to, because reproductively isolated groups may not be readily recognizable.

This means that according to one popular definition, “species” refers to sexual reproduction, wherein the dividing line is: One species cannot impregnate another species.

Another common problem is how to define reproductive isolation, because some separately evolving groups may continue to interbreed to some extent, and it can be a difficult matter to discover whether this hybridization affects the long-term genetic make-up of the groups.

So when Carson denies macroevolution exists, he denies not only the tons and tons of scientific evidence, but he doesn’t even know what he is denying. There is no agreement on exactly what a “species” is.

And all of this begs the question, “From where did homo sapiens (that’s us) come?” “Homo” is the species, and presumably it had a beginning. Carson, and others of similar leanings, apparently claim that homo at some point sprang fully formed, as in “So God created man in His own image.”

It’s difficult to do justice to the full range of Carson’s scientific ignorance, but here are some excerpts:

Ben Carson: Evolution Is An Absurd Myth, ‘Give Me A Break’

“They (scientists) are so smart that if they can’t explain how God did something, then it didn’t happen which, of course means that they’re God. You don’t need a God if you consider yourself capable of explaining everything.”

The irony is that it is the religionists like Carson, who claim they can explain everything with the simple declaration: “God did it.”

He claimed that “no one has the knowledge” of the age of the earth “based on the Bible,” adding that “carbon dating and all of these things really don’t mean anything to a God who has the ability to create anything at any point in time.”

Note that his statement has nothing to do with the validity of carbon dating. He merely rejects science in favor of religious faith.

(Carson) said evolution is unable to explain the development of an eyeball: “Give me a break. According to their scheme, it had to occur overnight, it had to be there. I instead say, if you have an intelligent creator, what he does is give his creatures the ability to adapt to the environment so he doesn’t have to start over every fifty years creating all over again.”

The “eyeball” objection has been used by evolution deniers for many years. It is completely untrue, and is a demonstration of Carson’s remarkable ignorance:

Scientists have traced the evolution of the eyeball from a “simple light-sensitive spot on the skin of some ancestral creature (that) gave it some tiny survival advantage, perhaps allowing it to evade a predator.

Every change had to confer a survival advantage, no matter how slight.

In fact, eyes corresponding to every stage in this sequence have been found in existing living species. The existence of this range of less complex light-sensitive structures supports scientists’ hypotheses about how complex eyes like ours could evolve.

The first animals with anything resembling an eye lived about 550 million years ago. And, according to one scientist’s calculations, only 364,000 years would have been needed for a camera-like eye to evolve from a light-sensitive patch.

One well could wonder how a medical doctor could fail to know this. Don’t medical doctors take biology classes? Don’t they have to pass biology exams?

Ben Carson Forgets Baltic States Are in NATO, Dates Islam to Before Christ

But just when it seemed Carson couldn’t move any further from reality, he sat down with TV preacher Pat Robertson’s Christian Broadcasting Network and came up with a brand new fantasy.

Carson said Putin shares a deep historical tie with Iran’s Supreme Leader Ali Khamenei and Palestinian Authority leader Mahmoud Abbas, suggesting he became acquainted with them during their college days in Moscow when Putin was a young KGB operative.

There’s literally no evidence to suggest Khamenei ever studied in the former Soviet Union. And since he and Abbas are several years older than Putin, the timeline doesn’t even make sense – Putin would have been a 16-year-old high school student at the time.

All together, Carson’s abysmal ignorance about evolution, geopolitics, climate change (“There’s always going to be either cooling or warming going on” “It’s ‘irrelevant.’”), gun control (“In case of an invasion by foreign power, the people will be able to aid the military. And also, if we have a time when we have the wrong people in office and they want to dominate the people, the people will be able to defend themselves.”), homosexuality (“It’s a choice.”), poverty (Create a regressive flat tax and eliminate policies sheltering the poor from having to pay taxes.), religious freedom (A Muslim should only be president if he or she “renounces the tenets of Islam.”) and other ideas of similar malodor, make Carson a perfect Republican — a perfect representative of Jindal’s “stupid party.”

The fact that Carson currently ranks #2 (to Donald Trump) says little about Carson and Trump, and much about the Republican electorate.

But then again, what choices do they have? The Republicans have created rules about what constitutes a REAL Republican, and to follow those rules, a candidate first must join the “stupid party.”

For once in his life, Bobby Jindal was right on target