Public radio recently broadcast a show about the compensation of CEOs compared to average workers. The findings were in line with those of this article:

Top corporate executives have seen their pay grow by more than 1,000% over the past 40 years, nearly 100 times the rate of average workers, according to a study released this week.

With wealth disparity continuing to accelerate, particularly since the financial crisis, the Economic Policy Institute reports that the gap between CEOs at the top 350 U.S. firms and the rank and file remains wide.

That compares with a wage increase of just 11.9% for what the liberal-leaning institute terms “average workers.”

Using another measure of compensation, which takes into account the realized value of the options when they were granted, the CEO comp growth still stood at 940.3%.

Institute researchers Lawrence Mishel and Julia Wolfe called for action to reduce the pay gap, even if means taxing the firms where the disparity is greatest.

“Exorbitant CEO pay is a major contributor to rising inequality that we could safely do away with,” they wrote. “The economy would suffer no harm if CEOs were paid less (or taxed more).”

Though Mishel and Wolf “called for action,” they did not explicitly explain why pay inequality is a problem we should “do away with.”

Income/wealth/power inequality clearly is a problem.

But the false tacit assumption is that income/wealth/power inequality is the same as pay inequality.

Disparity between executives and the broader workforce has been a hot-button issue as the gap has widened over the decades. 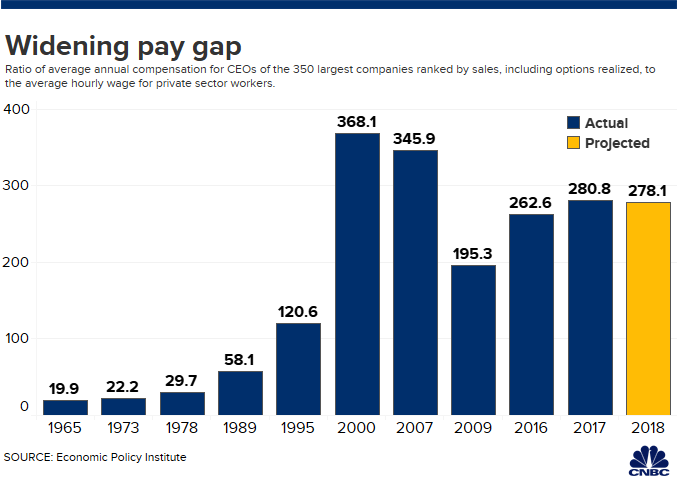 The total compensation growth since 1978 has outstripped that of the stock market growth of 706.7% and the wages of “very high earners,” which have grown 339.2%.

Mishel and Wolfe propose a variety of policy remedies:

Three of the proposed “reforms” involve higher taxes, but:

The “corporate governance reforms falsely assume shareholders have both the knowledge and the ability to set wages properly.

“We need to enact policy solutions that would both reduce incentives for CEOs to extract economic concessions and limit their ability to do so,” the EPI team wrote.

It is questionable that reducing CEO incentives to receive higher pay would be productive, desirable, or possible.

Measures to control their pay, though, would face opposition on the grounds that they are arbitrary and don’t take into account the value that strong CEOs add to their companies compared with other workers.

Carol Roth, CEO of Intercap Merchant Partners, a business advisory firm, said, “I don’t understand why there is any comparison between what a CEO makes and a quote unquote average worker makes.”

Roth also said the numbers are skewed by a few CEOs who earn huge compensation packages, and added that taking pay from CEOs and redistributing it to thousands of workers wouldn’t make a difference to the workers anyway.

“The CEO is not getting paid at the expense of workers,” Roth said. “The workers are making what they make because that’s the market rate.

If the CEO didn’t get paid that much, it’s not that the workers would get paid more. That money would go somewhere else.”

Wrong solutions come from wrong questions. The question is not, “How do we get corporations to pay CEOs less compared to other workers?” The question is: “How do we narrow the income/wealth/power Gap between the rich and the rest?”

Of the two, the latter is preferable because it would meet with somewhat less resistance and avoidance by the rich, and more importantly, it is pro-economic growth.

The ability of the rich to avoid progressive taxation should be ample proof of their strength in preventing income from being taken from them. But we already raise the rest’s income/wealth/power; we merely must do more of it and target it better.

Solutions to the Gap begin with the acknowledgment of just two facts:

1. The federal government has infinite dollars. It neither needs nor uses tax dollars:

Former Federal Reserve Chairman Alan Greenspan: “A government cannot become insolvent with respect to obligations in its own currency.”

Former Federal Reserve Chairman Ben Bernanke: “The U.S. government has a technology, called a printing press (or, today, its electronic equivalent), that allows it to produce as many U.S. dollars as it wishes at essentially no cost.”

Quote from former Fed Chairman Ben Bernanke when he was on 60 Minutes:
Scott Pelley: “Is that tax money that the Fed is spending?”
Ben Bernanke: “It’s not tax money… We simply use the computer to mark up the size of the account.”

Statement from the St. Louis Fed: “As the sole manufacturer of dollars, whose debt is denominated in dollars, the U.S. government can never become insolvent, i.e., unable to pay its bills. In this sense, the government is not dependent on credit markets to remain operational.”

2. Inflations are caused by shortages, not by federal spending.

Inflations can be cured by additional federal spending to eliminate shortages of crucial goods and services, most often energy and food shortages.

Today’s inflation is caused by shortages of oil, food, computer chips, construction materials, and labor. Federal spending to cure those shortages would eliminate the inflation.

A few federal solutions to the widened Gap are:

Thus, federally funded benefits should be paid equally to all recipients regardless of current wealth or income. That would eliminate the complexity of our current tax code, which provides the rich with Gap-widening loopholes.

The single biggest problem in economics is: How to narrow the Gaps between the rich and the rest.

The Gaps can be narrowed by taking from the richer or by giving to the poorer. The latter approach is preferable because it will suffer less resistance from the rich and grow the economy.

Some methods for narrowing the Gaps are:

The federal government has infinite dollars that can be used for Gap-narrowing. Shortages of crucial goods and services, not federal spending, cause inflations. These shortages can be cured, and Gaps can be narrowed, by targeted federal expenditures.

15 thoughts on “Asking the wrong questions about compensation levels”