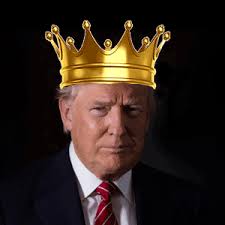 I am above the law. I am the law.
I own the Attorney General.
I own the Justice Department.
I own the U.S. Senate and the Majority Leader.
I own the Republican Party.
I own the Supreme Court.
I own the Appellate Courts.
I own the Military.
I own the prisons.
I own the favorable media, and I will destroy the rest.
I will pervert the criminal justice system in any way I wish.
I will pardon all criminals who are loyal to me.
I will continue to lie, cheat, and steal, but I will not be punished.
I will ignore the Constitution.
I will exact revenge against my political enemies.
I will punish whistleblowers who reveal my secrets.
I will punish any who displeases me.
I will enable my political loyalists to break the law, free from punishment.
I will continue to put my friends and family into positions of financial and political power.
I will continue to hire political hacks who do as I say, not what is best for America.
I will make billions of dollars from my position.
I will reverse all judicial decisions that displease me.
I will reverse all Congressional decisions that displease me.
I will fire the Federal Reserve chairman if he doesn’t make me richer.
I will divorce another wife and cheat on the next one.
I alone will send America into war.
I alone will decide who enters America and who must leave.
I will do whatever I want, whenever I want.
There is nothing you can do about it.
King George III was America’s last old king.
I am America’s first new king, King Donald I.
The religions will support me, just as they always support kings.
You will obey me.
Or you will be punished.

2 thoughts on “How far we have come; how close we are.”