. . . Here are excerpts from two posts (You can click the links to see the full flavor of what was written.)

They were not the only posts on the subject, but they are a representative sample.

September 15, 2016: What kind of President will Donald Trump be?

Trump singled out as the one person he admires, Vladimir Putin, the dictator of Russia.

Like dictators Stalin and Hitler, Trump wishes to rid his nation of those he considers undesirable — Muslims, Mexicans, other Latinos, gays.

Like all dictators, Trump is enamored with himself. He plasters his name on everything — buildings, airplanes, businesses. He tries hard to create a “cult of his personality” as did Stalin, Mao, and the Perons. 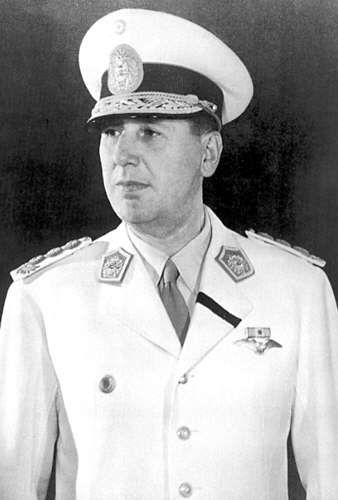 The Trump Foundation even paid $20,000 of charity money, for a portrait of Trump.

Like all dictators, Trump is a thin-skinned egomaniac. Say anything negative about Trump, and you will be subject to a flurry of insulting, even threatening Emails. As President, he will do more than threaten.

And like all dictators, Trump wishes to control the media. Why? Because once the media are under control, the people know only what the dictator wants them to know.
This is why Putin has that “80% approval rating” Trump admires. Kim Jong Un probably has 100% approval.

Dictators love to demonstrate physical invincibility. Putin, for instance, removes his shirt while riding horseback, to demonstrate his virility. And then there was Mao, swimming in the Yangze.

Like dictators Mao and Putin, Trump is in “perfect health.” In fact, he would be “the healthiest individual ever to the presidency.” We know this, because his doctor, Harold Bornstein jotted a quick note, dictated by Trump, telling us so.

Bottom line: Donald Trump has told us again and again, in many different ways, that he will be a dictator if we elect him.

Should we fail to listen with our own ears and fail to see with our own eyes, what Trump has made obvious, we and our children will join in the misery seen by the people of Russia, China, Argentina, Germany, Italy, Cuba, and other dictatorships.

Yes, friends, it can happen here. And when it does, we will have only ourselves to blame.

And then, two weeks later, came this post (excerpts):

Of whom does the following remind you?

Do demagoguery, showmanship and nativist appeals sound familiar? And which egomaniacal politician describes everything about himself as “incredible.”

Hitler was an effective orator and actor, adept at assuming various masks and feeding off the energy of his audiences. Although he concealed his anti-Semitism beneath a “mask of moderation” when trying to win the support of the socially liberal middle classes, he specialized in big, theatrical rallies.

He peppered his speeches with coarse phrases and put-downs of hecklers. Even as he fomented chaos by playing to crowds’ fears and resentments, he offered himself as the visionary leader who could restore law and order.

He often harked back to a golden age for the country, the better “to paint the present day in hues that were all the darker. Everywhere you looked now, there was only decline and decay.”

Seen any political slogans printed on hats and repeated constantly in speeches, to remind the “feeble” masses?

(There was) the belief of Hitler supporters that the country needed “a man of iron” who could shake things up. “Why not give the National Socialists a chance?” a prominent banker said of the Nazis. “They seem pretty gutsy to me.”

Does resentment of elites (aka “the establishment”) ring a bell? What about the need for change, to “shake things up”?

Know of any politicians whose own party continues to try to moderate them? Was there speculation about any politicians not really being serious about running for President?

Think. Which American politician wants to sue the press for unflattering articles?

Yes, it can happen here. It, in fact, is happening here, right in front of our noses. Don’t believe, even for one second, that we are immune, and that dictators only happen in other countries. Those “other countries” thought the same thing.

It remains for you independents and Democrats to end this horrifying drift toward totalitarianism.

America can be saved. Your children and grandchildren can live in a free America.

But you must speak now to your Representative and Senators. And you must vote in November.