The United States seemingly has puzzled with the problem of the growing Gaps between the rich and the rest of us. I say, “seemingly” because of the spectacular lack of success any remedial effort has had.

Not only have the Gaps widened dramatically in the past 40 years, but there has been a stunning increase in just the past year.

To combat the economy-crushing effects of COVID, the government has pumped trillions into the private sector. An inordinate share seems to have benefited the upper 1%.

Although virtually all politicians pretend to bemoan the growing income/wealth/power Gap, the Democrats seem unable to enact a solution and the Republicans actively oppose one.

We are not alone in this conundrum. Japan faces a similar problem, as excerpts from the following article show:

TOKYO — Over the past two years, Masataka Yoshimura has poured money into the custom-suit business his family founded over 100 years ago. He has upgraded his factory, installed automated inventory management systems and retrained workers who have been replaced by software and robots.

Japan’s prime minister wants him to do one more thing: Give his employees a substantial raise.

Wage growth has been stagnant for decades in Japan, the wealth gap is widening and the quickest fix is nudging people like Yoshimura to pay their employees more.

Higher wages, the thinking goes, will jump-start consumer spending and lift Japan’s sputtering economy. But raises are a nonstarter for Yoshimura. Increasing wages would be “truly fatal,” he said last month from his office at Yoshimura & Sons in Tokyo.

And he is far from alone in his thinking. Business groups, union leaders and others have questioned the feasibility of a plan by Prime Minister Fumio Kishida to offer sizable tax deductions to companies that raise pay.

That businesses would resist increasing wages even when essentially paid to do so shows just how intractable the problem is. Years of weak growth and moribund inflation rates have left companies little room to raise prices.

The prime minister is calling on employers to increase pay as much as 4% in 2022. Companies that comply will be allowed to increase their overall corporate tax deductions up to 40%.

Japan has many differences from the U.S. — cultural, economic, historical — but both nations seem to agree that the growing Gaps are a bad thing. They are bad, morally. They are bad, economically. They lead to oligarchy.

Oligarchy is a form of power structure in which power rests with a small number of people. These people may or may not be distinguished by one or several characteristics, such as nobility, fame, wealth, education, or corporate, religious, political, or military control.

Throughout history, oligarchies have often been tyrannical, relying on public obedience or oppression to exist.

Aristotle pioneered the use of the term as meaning rule by the rich, for which another term commonly used today is plutocracy.

In the early 20th century Robert Michels developed the theory that democracies, like all large organizations, have a tendency to turn into oligarchies.

In his “Iron law of oligarchy” he suggests that the necessary division of labor in large organizations leads to the establishment of a ruling class mostly concerned with protecting their own power.

Thus, we have a problem (the Gaps), as viewed by the nation as a whole, divorced from those who seemingly can solve the problem (businesses), who don’t see it as a problem at all.

Leaving the solution to a problem in the hands of those who don’t view it as a problem, or even who benefit from the problem, can lead only to today’s outcome: The problem grows worse.

It’s like telling a woman the “problem” is that her sexy dress attracts too many men, when that is exactly what she wants. She is unlikely to solve the “problem.”

Business is unlikely to solve the problem of the widening Gaps when that is exactly what business leaders want.

Gap Psychology dictates that people generally wish to widen the Gap below them. 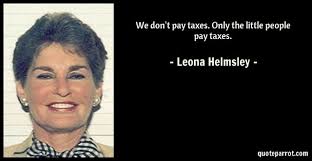 Reality dictates that the rich wish to become richer, and the term “richer” implies a growing difference vs. “poorer.”

Without the Gaps, no one would be rich, and the wider the Gaps, the richer they are.

So both the motivation and the power to narrow the Gaps lies not with business, but with government, the sole question being how government should accomplish the narrowing process.

Some economists have suggested minimum wage laws, but clearly, these have failed even to approach the goal. The main problem is that wages are a business expense, and successful businesses devote themselves to minimizing expenses.

The undeniable fact that wage increases cut profits, stands as a concrete barrier to a business solution.

The one entity that needn’t worry about profits is the federal government, and it has the perfect Gap-narrowing tool: Tax policy.

The federal government pays all of its bills with newly created dollars, ad hoc. It can do this endlessly. No limits.

Example: The federal government long has wished to encourage home building and ownership, so it provides to homeowners, many tax breaks that are not available to renters. (The rich mostly are owners, not renters.)

The government’s use of tax laws to benefit those the government favors is the primary reason why the rich benefit from tax breaks not available to you.

If the government really wanted to narrow the income Gap between the rich and the rest, it first would eliminate the FICA tax. This ultimately regressive tax applies only to the first $137.7K of salary, and not to anything above that level.

The person have a salary of $150,000 pays exactly the same amount of FICA as does the person whose salary is $1 million. Half of FICA is deducted directly from paychecks and half ostensibly is paid by the employer.

In reality, however, all of FICA comes out of paychecks, because employers figure this cost when deciding what to pay workers.

The elimination of FICA (which contrary to popular wisdom, does not fund Social Security or Medicare), immediately would help narrow some of the income and wealth Gaps, particularly the Gaps between lower and middle-income salaried workers vs. upper income workers.

Second, the government could provide free, no-deductible Medicare for All. This is an expense ostensibly borne by those companies that provide health care insurance to workers. I say “ostensibly,” because it is a cost that companies consider when determining salaries.

Some other Gap-narrowing steps the federal government could take include:

In short, there are many steps the federal government easily could take, to narrow the Gap between the rich and the rest.

The sole problem is the rich. They don’t want the Gaps narrowed. The Gaps are what makes them rich. Without the Gaps, no one would be rich; we all would be the same. And the wider the Gaps, the richer they are and the poorer we are.

So, they use their massive financial power to bribe the politicians and to convince the populace, that these steps would be “unaffordable,” “unsustainable,” “socialism,” “undeserved” by the underclasses, and/or “inflationary.”

In truth, the federal government, being Monetarily Sovereign is unique in that it can afford and sustain any financial obligation. It never unintentionally can run short of dollars.

None of the above-mentioned steps are socialism, which involves government ownership and control, not just spending. Sadly, the people who cry loudest about “socialism” have the least idea about what socialism is.

The less-than-rich deserve the same kind of federal help as do the rich, who like Donald Trump, have found ways to pay zero taxes despite massive earnings.

And inflation always is caused by shortages of key goods and services, never by government spending.

The currently wide and widening Gaps are not inevitable. They are a choice, an insidious and harmful choice foisted on us by the rich.

The sole cure is to find, then elect, someone who understands the problem and the solutions, and who is not under the thumb of the rich — if such people actually exist.

5 thoughts on “The intractable puzzle: Narrowing the Gap between the rich and the rest”