After some thought, I believe such a question exists, and I will reveal my nomination here. You may disagree with my choice, and if so, I’d be glad to know yours, or if you feel no question is that important.

But beginning in the 1700’s AD, men created a variety of laws. The laws were completely arbitrary and created from thin air, as all laws are. And as is true for all laws, these laws had no physical existence. They merely were concepts.

The laws could be spoken, handwritten, typed, printed, mimeographed, texted, Emailed, or delivered in any number of ways, but the laws themselves had no physical existence. They merely were an amalgam of ideas, concepts, and beliefs. 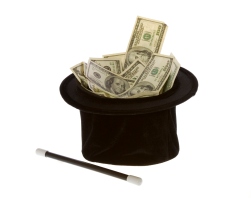 And now for the question that I believe to be the most important question in economics:

How Many Laws Can The U.S. Federal Government Create?

I suggest that the answer to this question is: “Infinite.”

How is it possible for humans to create here on earth, something that is bigger than the oceans, stars, and the universe’s atoms? The reason is that water, stars, and atoms are physical objects, but laws have no physical existence.

Like creating numbers, the ability to create laws is limitless. You cannot see, hear, feel, taste, or smell a number or a law. You can sense representations of numbers and laws, but the numbers and laws themselves merely are concepts.

Similarly, the dollars created by laws, have no physical existence. You can see representations of dollars — dollar bills, bank statements, savings account passbooks, T-bill records, etc. — but you cannot see, hear, feel, taste, or smell a dollar. It is just a number in a balance sheet.

All the while, invisible dollars will flow to and from the Federal Reserve, tidying things up. And it all will be done in thin air, with nothing but the occasional atom moving.

We’re not even talking about an infinite ability to “print” dollars. Those printed green paper things you carry in your wallet are not dollars. They are representations of, or titles to, dollars. The real dollars are just numbers in numerous records and balance sheets all over the world.

And because the government has the infinite ability to create U.S. dollars:

II. The U.S. government has no need to collect U.S. dollars from anyone or anywhere.

Even if all federal tax collections fell to zero, the federal government could continue spending forever. Not only that, but:

III. All the tax dollars you send to the federal government are destroyed upon receipt.

The amount of money that exists in the United States is divided into “M”classifications such as MZM, M0, M1, M2, and M3, according to the type and size of the account in which the instrument is kept.

The tax dollars you, and everyone else  sends to the federal government generally come from checking accounts, which are part of the money supply measure called “M1.”

When you pay taxes, you take money from your M1 checking account and send them to the Treasury where they cease to be part of any money supply measure. Effectively, your tax dollars are destroyed.

That is why no one ever can answer the question, “How much money does the federal government have?” The only accurate answer is “Infinite.”

The Monopoly Example
If you ever have played the board game Monopoly, you know that it usually is played with four players, plus a Bank. The function of the Bank is to distribute Monopoly dollars to, and to collect Monopoly dollars from, the players, according to the rules.

But, one rule of Monopoly is that the Bank never can run short of dollars. If you were to open the game box to discover all the printed dollar certificates were missing, what would you do in order to play the game?

One approach would be to take a sheet of paper and divide it into four columns, one column for each player.

At the top of each column you would print each player’s name, and below each name, a starting amount of money.

The illustration at the right shows that each player begins with 5,000 Monopoly dollars.

Then as each player spends and receives money, the amounts below that player’s name are changed.

Many of those dollars go to, and come from, the Bank, but the bank has no column because the Bank has infinite dollars.

Although the rules specify that tax dollars and other dollars go to the Bank, the above example shows that they really are destroyed upon receipt. The Bank has no column. There is no way to determine how many dollars the Bank has. It has infinite dollars.

In the real world, the federal government operates just like the Monopoly Bank: It collects dollars from the public, and it distributes dollars to the public. But once dollars are received by the Treasury, they disappear.

Though the Treasury keeps internal records, there is no way to determine how many dollars the government has. It has infinite dollars.

There are three reasons: One real, one mythical, and one secret.

The rich people and rich companies are rich only because of the Gap between them and those who are not as rich. If there were no Gap, we all would be the same. No one would be rich. And the wider the Gap, the richer are the rich.

The rich always want to be richer. This is known as “Gap Psychology,” the desire to widen the income/wealth/power Gap below, and to narrow it above.

Widening the Gap below can involve either gaining more for oneself or preventing those below from gaining. Either will make one richer.

All these sources of information combine to tell you the Big Lie, that in order for you to receive more federal benefits, taxes must be increased.

That misinformation provides an excuse for the current battles against President Biden’s “Build Back Better” Act, which first was proposed at a $3.5 trillion level, and since has been cut in half because of the Big Lie.

The pretext was that this proposal must be “paid for” with taxes. But, as you now know, taxes do not fund federal spending.

The federal government pays for everything by merely sending instructions (checks and wires) to creditors’ banks, instructing the banks to increase the balances in creditors’ checking accounts.

When the banks do as instructed, this creates more M1 dollars, the same kind of dollars you send to the federal government as taxes.

Since the federal government has no need to ask anyone for dollars, why does it borrow dollars?

The U.S. federal government never borrows dollars. The acceptance of deposits into Treasury Security accounts (T-bills, T-notes, T-bills) is wrongly called “borrowing” and federal “debt.” It neither is borrowing nor debt. 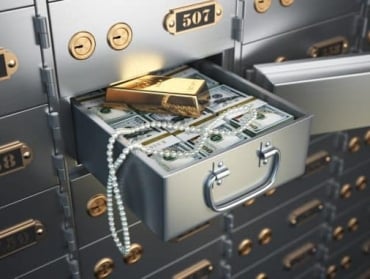 The closest parallel to a T-security account is a safe deposit box.

They neither are loans to your bank nor are they debts of your bank.

The bank “pays you back” simply by allowing you to take back whatever dollars are in your box.

Similarly, when you make a deposit into your T-security account, the federal government never touches those dollars. The government “pays you back” by allowing you to take back whatever dollars are in your account.

Since the federal government has no need to ask anyone for dollars, why does it provide for deposits into T-security accounts? There are two real reasons and one secret reason:

The federal government has no need to ask anyone for dollars, and has the infinite power to spend. But, doesn’t too much government spending cause inflation?

Remember that way back in the 1780s, the federal government created as many dollars as it wished and gave those dollars whatever value it wished — and it did all this by passing laws.

The federal government still has the unlimited power to:

Over the years, the government has used all three of those powers. While nos. 1 and 2 already have been explained, you may be curious about how the government controls the value of dollars. It has two primary tools:

IV. The driver of inflation never is federal deficit spending, but rather the scarcity of key goods and services.

Like all inflations through history, today’s inflation is caused by shortages of energy, food, computer chips, supply chain resources, and labor.

Also notice in the above graph that:

This should surprise no one because economic growth requires money growth. The most common measure of economic growth is Gross Domestic Product (GDP) a formula for which is:

All three factors on the right-hand side of the equation are related to an increased dollar supply.

What happens when the federal “debt” (i.e., the net total of deficits) decreases?

Again, this should surprise no one. Just as a growing economy requires a growing supply of money, reducing federal “debt” (i.e. running federal surpluses) takes dollars from the economy and sends them to the Treasury, where they are destroyed..

By definition, GDP is reduced when dollars are taken from the economy.

Fortunately, the U.S. federal government has the ability to create infinite U.S. dollars and to control their value, i.e. prevent excessive inflation.

So, the federal government has the ability to fund Medicare for All, Social Security for All and college for all who want it. Further, the government has the financial ability to eliminate the grossly recessive employment taxes (FICA) and to help the states, counties, and cities to reduce their tax burdens.

The problem has two parts: Financial and political.

Financially, is there a dollar limit, beyond which federal deficit spending actually harms the economy rather than benefitting it?

There may be, but no evidence exists for any limit. As the following graph shows, federal “debt” (blue line) has increased massively, while inflation (red line) has followed a comparatively modest, even trajectory.

Claims that future federal deficit spending, in any given amount, will cause inflation are based on intuition and guesswork and not on historical precedent.

Politically, is there a point beyond which federal deficit spending gives the federal government “too much power”?Libertarians think so.

Sadly, while the federal government, being Monetarily Sovereign, has infinite funds, monetarily non-sovereign local governments do not. They must levy burdensome taxes in order to spend.

The question of “too much federal power” often is answered in a general sense, but when specifics are broached, the answers are not clear. I, for one, have no idea what “too much” federal power is, except when it impinges on what I personally view as a personal privilege.

Outlawing recreational drugs, liquor, abortions, certain marriages, and certain books fall into that category. Mandating vaccination to protect our species does not. But that’s just my view.

SUMMARY
The most important question in economics is: How Many Laws Can The U.S. Federal Government Create? The answer is “infinite.” Since U.S. dollars are created by laws, the U.S. government can create infinite dollars and can give these dollars any value it chooses.

Thus, the U.S. government has no need to collect U.S. dollars from anyone or anywhere. All the tax dollars you send to the federal government are destroyed upon receipt.

6 thoughts on “The single most important question in economics”