Those who understand Monetary Sovereignty are familiar with these basics:

In essence, you might as well throw your tax dollars into a bonfire, for all the good they do to prevent federal government insolvency.

In return for your obeying the law, the Treasury does you the service of throwing your dollars into that federal bonfire, so you don’t have to bother.

The Committee for a Responsible Federal Budget (CRFB), in bemoaning the lack of tax-payment compliance in America, has published the following graph.

Presumably, the graph is meant to make you feel outrage about so many people having refused or neglected to throw their dollars into the IRS bonfire. 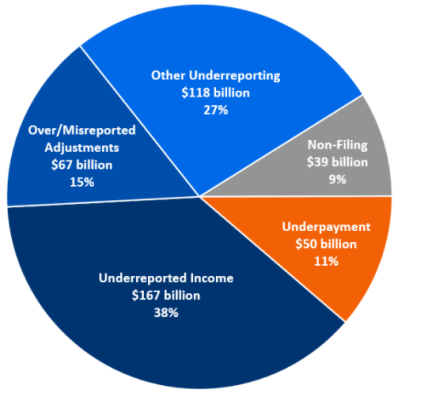 In reality, the outrage you feel should be directed at the politicians and groups like the CRFB.

They are the ones who claim that the federal government either can’t afford to, or must raise taxes to, provide free Medicare for All, Social Security for All, College for All, reduced carbon emissions, improved infrastructure, air, water, and land, narrowed Gap between the rich and the rest, etc.

The U.S. Congress, having unlimited disposable dollars, could and should be doing so much more to improve your life.

Instead, they argue about whether spending by the federal government has exceeded the government’s “means” (It has no “means” to exceed), or whether federal spending is “socialism” (It isn’t), or whether the poor will refuse to work if given financial aid (They won’t refuse if the aid is on top of, rather than instead of salaries).

President Richard Nixon, a Republican, gave us Monetary Sovereignty by eliminating the last gold standard, so it is a special disgrace that the current Republican Party now refuses to use the most valuable asset any nation can have: Unlimited money.